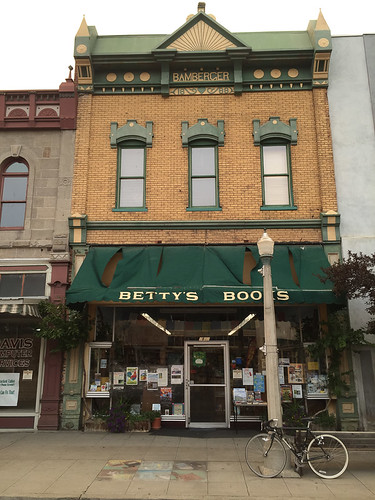 Last month I spent five days taking a closer look at bicycling and bike tourism in Wallowa, Baker, and Union Counties as part of a partnership with Cycle Oregon. Starting in the small town of Halfway on Monday, I rode northeast to circumnavigate the Wallowa Mountains and Eagle Cap Wilderness. I camped, rode rocky dirt roads, did some bushwhacking, sampled singletrack on a mountain bike, rolled on an official State Scenic Bikeway, and met the people working to make this region a biking destination. Read more from this series here.

During my recent trip through Eastern Oregon I discovered something unexpected: a charming town called Baker City (pop. 9,800).

I arrived after a tough, hot, windy and smoky 60-mile ride from La Grande. The route is usually a gorgeous tour of the Grande Ronde Valley and its mountain ranges to the east and west. But due to unseasonably warm and dry weather a major fire hand broken out south of Baker City and winds funneled its smoke up into the valley. Despite that, it could have been much worse. 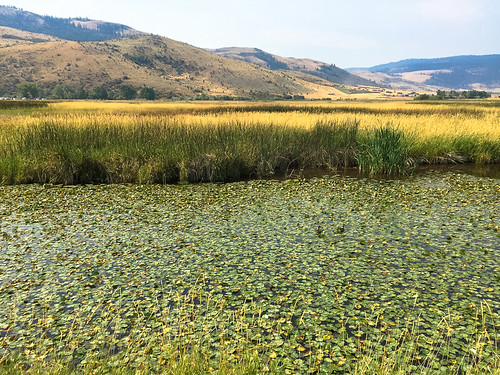 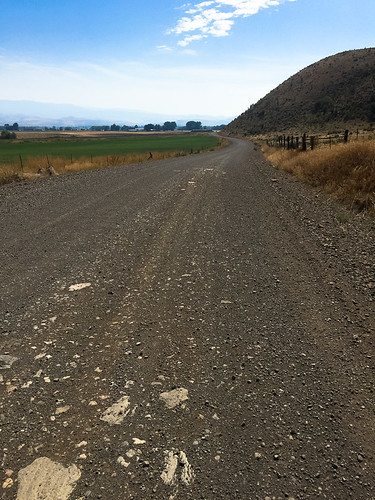 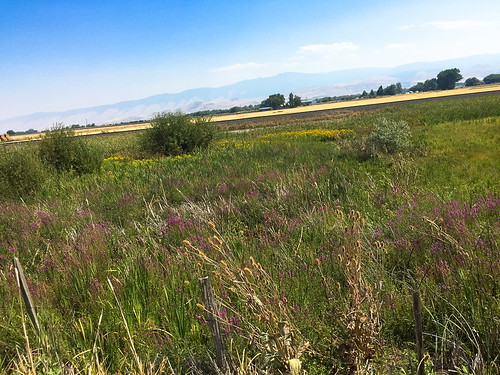 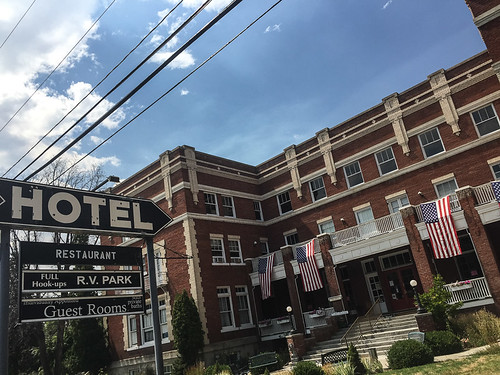 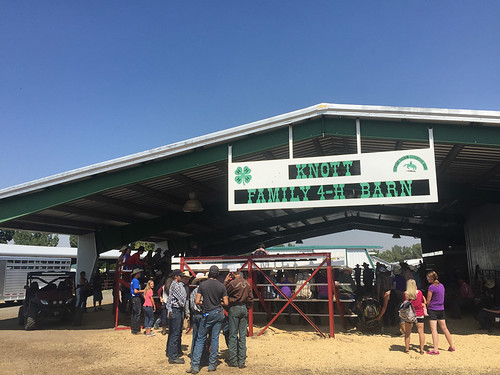 Got to see a bit of a rodeo bible camp at the Eastern Oregon Livestock Show grounds. 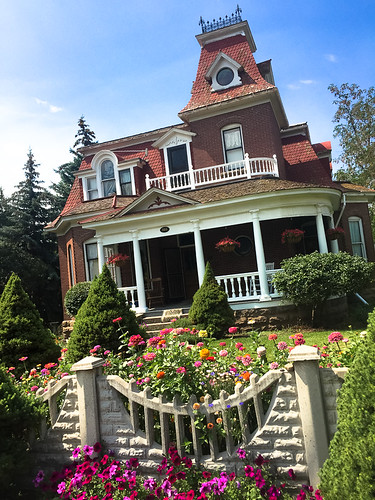 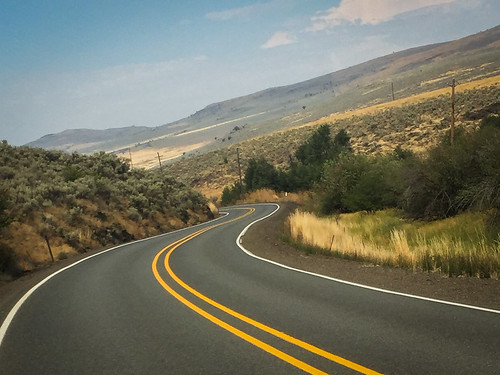 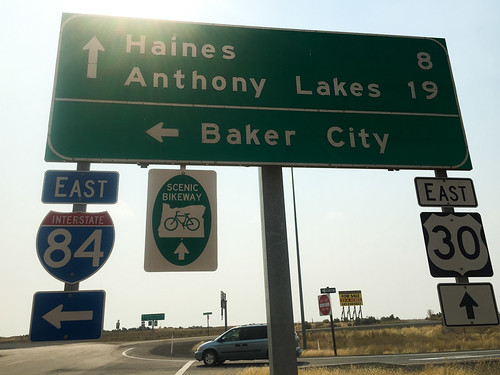 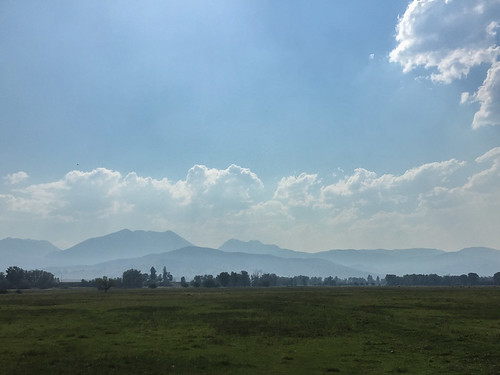 Little Alps and the Elkhorn Mountains. 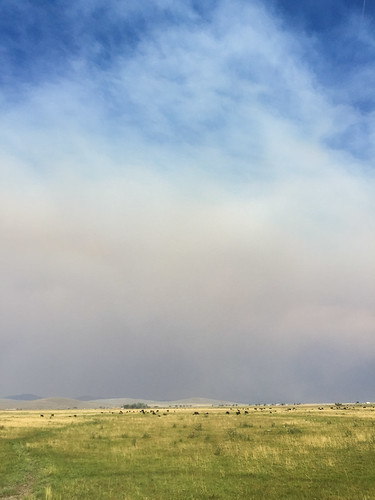 The smoke made for interesting views. 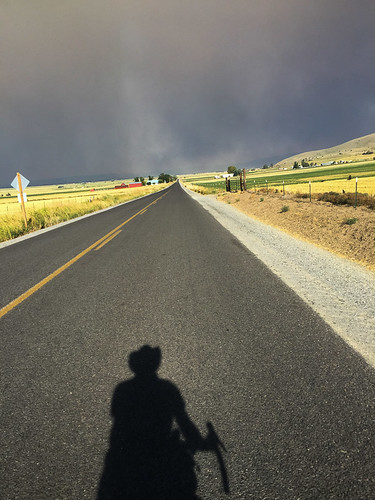 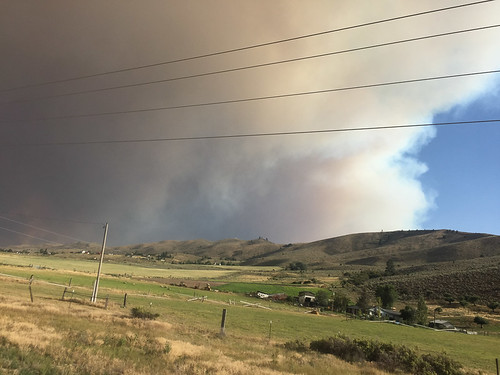 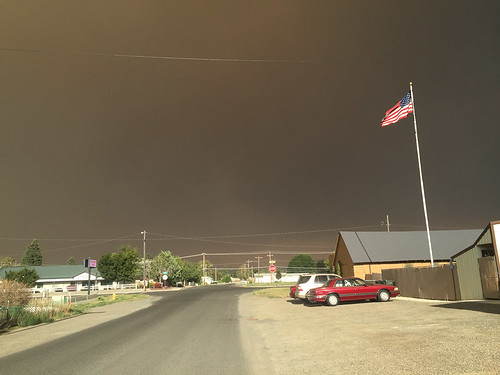 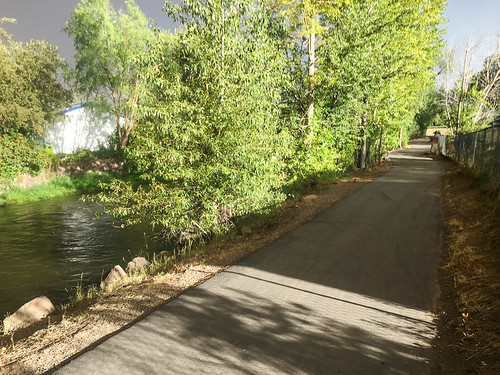 I stumbled upon this great path, the Leo Adler Memorial Parkway, which is right along the Powder River in Baker City.

I was lucky. The Grande Tour Scenic Bikeway route is a figure eight that connects La Grande and Baker City. I just happened to choose the west side of that figure-eight for the second leg of my ride (which started at North Powder). Had I headed east into Medical Springs I would have faced dark and very smokey air headed into Baker City.

As it was, my side of the valley still had blue skies. The headwind was stiff and the mountain views weren’t quite as clear, but there was no denying the beauty of the area.

Once I rolled into Baker City, the sky was a strange orange-grey hue and I was worried about the fire. My first choice for dinner, the famous Paizano’s Pizza with the pizza-slice bike racks, was closed to do a family emergency related to the fire. In some ways that was a blessing in disguise, because I ended up searching for food on Main Street. 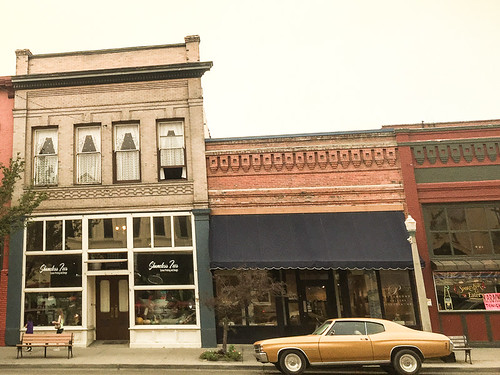 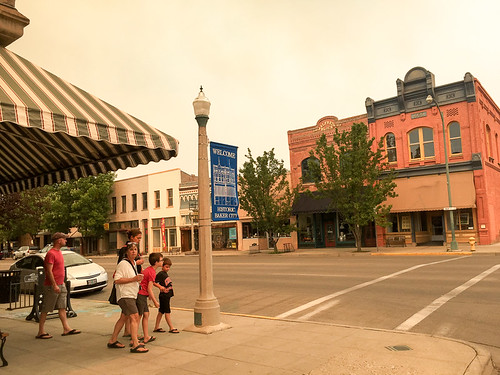 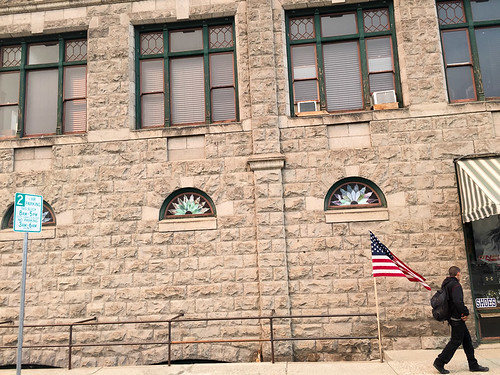 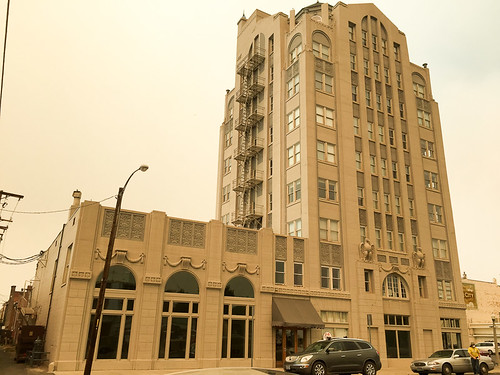 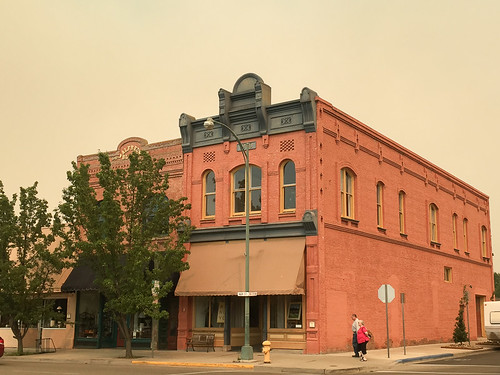 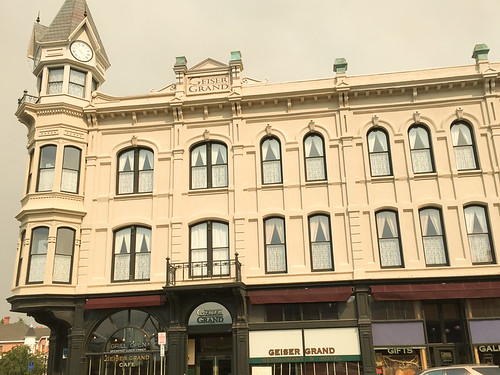 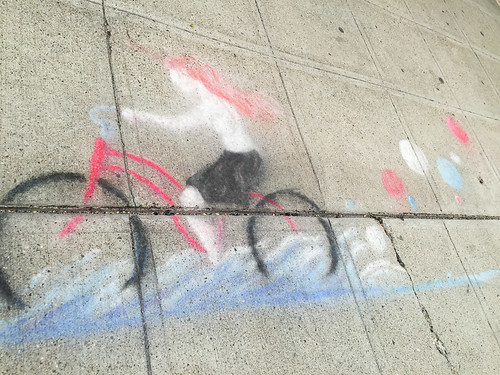 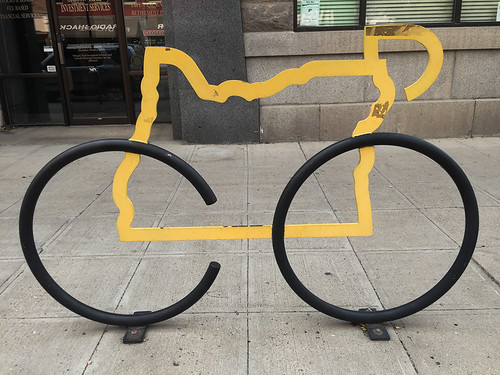 Cycle Oregon has many ties to Baker City. 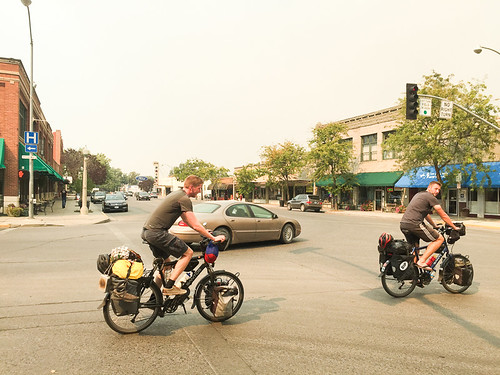 Bike shop owner Jared Johnson (below) says he sees about one person touring the Trans-America route each day in summer. 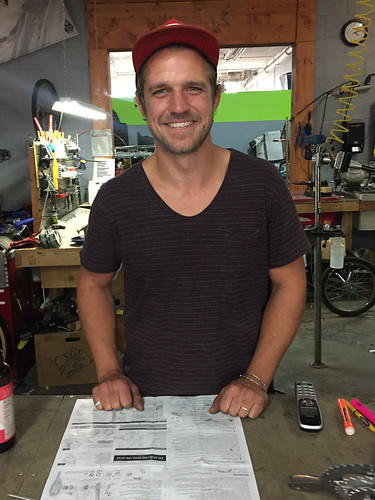 Downtown Baker City has somehow managed to remain in tact. Historic buildings still stand proud and independent businesses fill the ground floors. There was a very noticeable lack of national chains and no big box stores as far as I could see. That’s no accident according to Jared Johnson, owner of Flagstaff Sports (2101 Main St), a bike/skate/ski shop on Main Street. Johnson said locals have organized to keep chains away.

I ended up walking into Lone Pine Cafe (1825 Main St) , a place several folks recommended. I grabbed a table outside and did what I always do a new city: I watched people. Despite the semi-smokey air, Main Street buzzed with activity. People were on the sidewalks walking and talking and people were sitting outside of bars and cafes. I’ve been to many Oregon towns that have been decimated by big box malls and/or highways running through them. Baker City has resisted both, and it’s paid off.

Unlike many cities, Baker City has kept Main Street with two-way traffic. This feels much nicer for humans and speeds seemed lower than other main streets I’ve visited.

While I sat at my table, some people at the table next to me actually yelled at a friend across the street. They exchanged smiles and words. That type of interaction might seem like a small thing, but it’s a big deal from a livable-streets point of view.

It’s also a big deal if you happen to be on a bike. With Baker City being home for the Baker City Cycling Classic and on the route of both the Grande Tour Scenic Bikeway and Adventure Cycle’s Trans-America route, seeing people riding on Main Street is very common.

Another good sign that Baker City is worth your attention? Lone Pine Cafe is fantastic! I recommend their Reuben sandwich and salad. 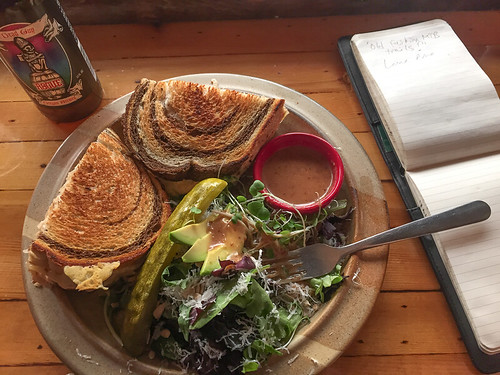 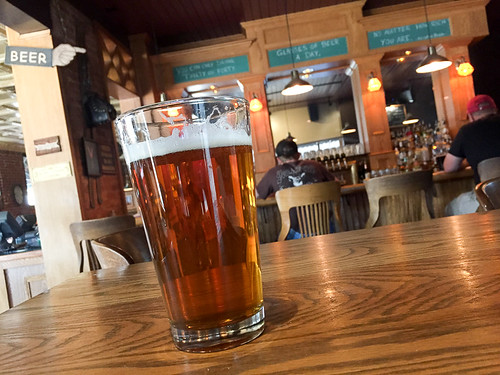 Speaking of fine local establishments, Barley Brown’s (2190 Main St) is perhaps Baker City’s most important culinary claim to fame. The beer at Barley Brown’s has won gold medals as the best in Oregon. You don’t see it on the shelves at your local market because it’s still a relatively small operation. They’ve got a pub and a taproom that both have lines out the door on most nights.

Baker City is a gem. Next time you find yourself in Eastern Oregon, or if you’re just passing by on I-84, do yourself a favor and check it out.

Note: Hope you’ve enjoyed these special reports from Eastern Oregon. You can read all five here. And wait, there’s more! I just so happen to be headed back to Baker City this Friday for the start of the 28th annual Cycle Oregon ride. Stay tuned for more photos and stories from the road.

Whenever I listen to OPB I get a strong urge to visit Baker City (along with Gleneden Beach, John Day etc…), but I’ve never seen photos of it before. Now I really want to go.

PDX metro area has it’s plusses/charms, but from some one who grew up in a small town, next to a small city, in a small state, Baker City looks really appealing.

parents retired there about 10 years ago. I would actually say that main street is about 1/2 empty with a large number of failed business attempts and shuttered windows, as with several blocks off main street. there are some businesses, including Barley Browns (you failed to mention the best brew pub in the entire town) which have found niche’s in which to thrive. A good number of those businesses are one recession away from closure. Main street is also wider due to historical necessity – turning a horse carriage around required some width, but the median now serves as a place to pile snow in the winter. Nice enough to visit for a few days…very few jobs. Most of the kids, who earn a college acceptance, leave and few come back due to the Leo Adler scholarship program.

photos didn’t load on the desktop I was on at the time.

Great post! Baker City has always been a personal favorite of mine, as I like 1890s-era buildings, and there’s lots of them there.

I think all of us BikePortland blog rats would do well to take a 5 day hiatus from lurking at our keyboards and go out and orbit the Wallowas. I’ve never done it, and I’m certainly overdue.

One, rather more left leaning, statewide goal that I would support is a state wide bus system. So that if people from Portland wanted to go somewhere for a bike tour—like NE Oregon, for example—they could have a modest amount of gear including bicycles transported there. There are lots of summer time destinations that could be linked to the bigger urban areas. And the route could modify a bit for wintertime destinations.

There are many ways this could be creative: Overnight berths for long distance destinations. Double decker buses, customized to have plenty of gear storage and maybe some food service. Maybe a small upper level area with cafe seating.

Double decker tour buses are used all over the world and Oregon could be innovative in the style of this venue. If someone wants to go bike touring–or winter touring—in some area five hours away why should they have to drive? Or just connecting E. and C. Oregon with the coast. This promotes safety by getting individual vehicles off the highway. But I don’t see a lot of “progressives” jumping on this as a cause.

Aren’t there several private enterprises that do this already? Obviously they’re not public, but the option does exist.

Shhh..this is our little eutopia. We love Baker City. Downtown is not only awesome but beautiful. There maybe some shuttered buildings but it is more due to bad business plans or owners that simply don’t want to rent their buildings out. We just expanded our business and are thrilled with our town!

My home town… I left Baker in 1990, before it became Historic Baker City. The Geiser Grand Hotel had all the appearance of an abandoned building, painted orange all over including the windows. Unfortunately I rarely make it back there and I am happy to hear that it remains the unchanged utopia that I love! I am especially happy that the big box store resistance is standing strong.

The only route I’ve ever traveled between Baker and La Grande is I84. The Grande Tour Scenic Bikeway is a must for me!

Thanks for showing what other parts of the state have to offer. Seems like snooty Portlanders like to look down their noses at those “simple folk” in small towns.

How does one carry pizza on a bike, when all you have is the standard skinny rear rack, cargo net ?