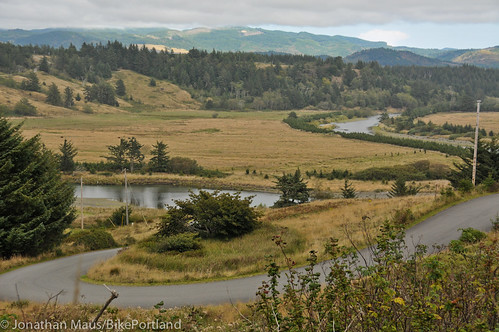 This stellar road inside Cape Blanco State Park is now officially recognized as one
of the best places to ride a bike in Oregon.
(Photo © J. Maus/BikePortland)

The Wild Rivers Coast Scenic Bikeway is a a 61-mile route based out of Port Orford. It heads southeast along the curvaceous Elk River and then north up to Cape Blanco State Park, the westernmost point in the entire state. The park includes a lighthouse and the historic Hughes House, both of which you might recall hearing about when I explored the area myself a few years ago during a ride down the coast. 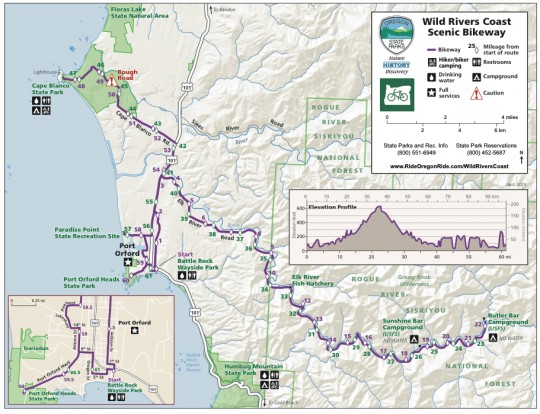 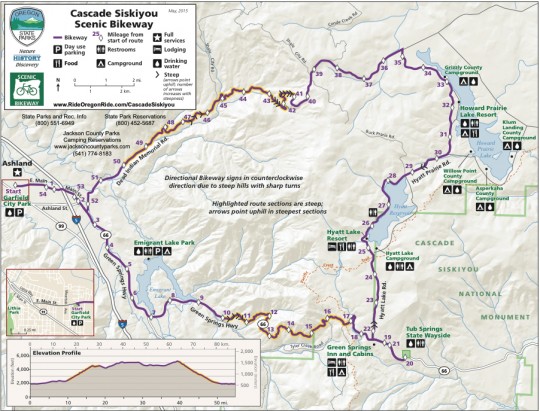 The Cascade Siskiyou Scenic Bikeway begins in the southern Oregon city of Ashland. The 55-mile loop heads east and takes you around Emigrant and Howard Prarie Lakes. There’s even a nice bikepacking option if you’re ready to sleep overnight.

With the addition of these two new Scenic Bikeways, Oregon now boasts a total of 14 routes that have been officially recognized since the program was established in 2008.

The Bikeways program does not come with any funding for infrastructure improvements, except for special way-finding signage. The routes themselves are mostly on standard roads and highways, however the selection committee takes into account the general safety of the road in making their decisions.

You can learn much more about them and the other 12 Scenic Bikeways at RideOregonRide.com.

Are any of them car-free?

No. There might be a section of one of the routes here or there where driving is prohibited; but in general, these are just routes along standard roads and highways. They come with no additional infrastructure as part of the designation proecess. The selection committee does however, consider the safety of the roads when making their decisions. The routes are also signed as Scenic Bikeways, which adds an element of safety. It should also be noted that local advocates could certainly use a Scenic Bikeway designation as leverage to push for infrastructural changes but I’m not aware of that happening anywhere yet.

So it seems to me this is just another way for government officials to pat themselves on the back without actually doing anything.

But ya know, you can also not complain, go ride some beautiful roads you’ve never been on before, give some locals a few bucks for food/beer, maybe camp out somewhere, have a good time and not overthink this whole thing. Be thankful you live in Oregon. Or move back to where you grew up and enjoy the cycling there.

Ah, the classic “shut up and stop complaining” fallacy.

Calm down. Go for a bike ride.

No, seriously. What is wrong with this? Like really wrong. You’re snarking about this right out of the gate. So why exactly? I see very little wrong with it. So enlighten us.

I thought highway 101 was already a ‘scenic bikeway’ aka death-trap? What makes these different?

Also, Ashland is notoriously unfriendly to bicycles and I don’t spend my tourist dollars there if I can help it.

I rode the Asland “lakes loop” a couple weeks ago, and was amazed at how beautiful that ride is. As for safety is concerned it was ok. Most the passing traffic kept a reasonable distance as they passed. Old Historic
Highway going through the Corbet area is much worse. I highly recommend this route to confident hill climbers

I don’t think they really considered the safety issue. I have riden this route and it’s not safe on summer weekends with lots of trucks pulling boats and trailers and agressive drivers trying to pass without passing lanes or turnouts all the way up to the Green Springs Summit. The State should not be promoting these high traffic, state highways without the funding to significantly improve safety.

They did consider it. They just didn’t decide that everyone should hide under their bed because the sky might fall.

I rode the northern tier of the route a couple years ago (and then went north over Crater Lake all the way to Breitenbush). Dead Indian Memorial has some seriously steep sections here and there! I see why they suggest going CCW. I don’t remember traffic being an issue at all, but I could see how summer weekends might get some camper/boat/trailer traffic.

If the state wants to improve access and encourage use, there needs to be more services on these routes. Even the Willamette Scenic Bikeway has some long stretches without any mention (or reality) of restrooms, camping, stores, water. I feel the state needs to find a way to ensure really basic, basic services are available on these routes. Simply promoting the route is otherwise meaningless.

We just rode the Willamette Bikeway in mid June. We took it easy and stretched it out over 5 days of riding. A couple more restrooms along the way would have been appreciated. Overall the route seemed very comfortable. Very little traffic and a lot of drivers pulled over into the opposing lane as they passed us. The only issue we had with traffic was crossing 34 near Corvallis. The new bike camp going in at Independence looks really nice.

We’re both 50+ and this was our first multi day ride. We enjoyed it enough that we’re planning to ride at least one more Bikeway this year.

A big thank you to all the folks behind the Bikeways.

Maybe I missed it, but it would be cool if the routes could be easily downloaded into a bike computer (GPX, TCX, etc.).

Ah, I see – I don’t think all the routes have the link to ridewithgps; I didn’t see one here, for instance:
http://rideoregonride.com/road-routes/larch-mountain/

(By coincidence, this route was submitted by my former housemate :).

This is a comment from a local. The Cascade-Siskiyou Lakes Loop is a quality ride but the state’s designation has done nothing to address the challenges it presents. The Greensprings (Hwy #66) climb is 6 miles long with a double no passing stripe and no shoulder. Sight lines are often short. The descent has several hairpin turns predictably covered with gravel spread by autos not staying on the pavement. Water sources are greatly reduced by Jackson County closing the camp grounds and Howard Prairie Resort at their convenience. The only people who really gain from the new designation are the local merchants who are annoyed with the cyclists who clutter up their town.

I’d like to send out a warning to anyone thinking of doing the Wild Rivers Coast Scenic Bikeway – DO NOT DO THIS RIDE ON A WINDY DAY!!
We opted for the Port Orford (Battle Rock Park) to Cape Blanco route – bypassing the Elk River leg because it was too many miles for one of the riders.
On this particular July day, the wind was extremely bad. Regrettably, we chose to continue to ride 101 to the Cape Blanco road, thinking the wind would ease up. The Cape Blanco road is a very narrow 1.5-lane road with ZERO shoulder. And the wind was horrible. One of our riders, who weighs 95 pounds, was blown right and left and was terrified. But, she wanted to reach the destination – which we did. (only to find the Cape completely fogged out)

I REPEAT: DO NOT DO THIS RIDE ON A WINDY DAY, if you have someone in your group who is lightweight and inexperienced.