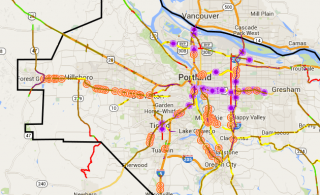 An interactive map of ODOT biking facilities,
including gaps.
(Click for live version)

As the Oregon Department of Transportation sprints to meet an August grant deadline that could bring federal money to local biking and walking improvements, it’s asking for public input about the deepest needs.

As we wrote in February, this project is part of the state’s first-ever comprehensive list of the existing state of its biking and walking facilities.

If awarded, the federal grants that ODOT applies for after this process will go toward projects being built from 2018-2021.

“If you were going to pick one thing to spend time on in the virtual open house, it’d be the virtual maps tab,” Horning said in an interview Monday. “Write your address in the search box so it’ll zoom to your neighborhood, and just see if that annoying gap in the sidewalk on the ODOT highway by your house, does that show up as red? And if it doesn’t, drop a pin there.”

The maps of biking and walking facilities include such things as a solid red line on Portland’s 82nd Avenue, indicating the lack of any bike facilities there, and 25 missing crossings along Tualatin Valley Highway through Washington County.

Horning also encourages people to check the existing lists of comments about biking and walking facilities and give “thumbs up” votes to problems that they agree with. ODOT hopes this will help the biggest problem spots float to the top.

ODOT launched the inventory process after coming up completely empty on federal grants for Portland-area active transportation projects to be built from now until 2018. This pilot project in Region 1, which is ODOT’s name for the Portland metro area, may become a model for other parts of the state.

Another component of ODOT’s open house is a brief survey that asks people to help ODOT decide which factors should most important in deciding which projects get built. The current options are crash history, crash risk, transit access, access to essential destinations, service to transportation-disadvantaged populations, filling network gaps and being part of local jurisdictions’ existing plans. Survey takers can also suggest other criteria that the state should consider.

Hmm.. there are two bridges in SW that shouldn’t need a thumbs up to prioritize at this point, but I’ll play along.

Doesn’t this tool make it seem like there aren’t problems on non-ODOT roads? Because I see comments using the blankness of the map in the rest of Portland as an excuse to say certain areas have “enough” multimodal use.

Seems like a potential clever political tool and move by ODOT to obfuscate the truth on the ground since few people understand the jurisdictional difference.

Hrmm, just tried to leave a comment about 405 offramp onto 4th ave northbound, that squeezes out the bike lane on Barbur/4th Ave. right after you cross the bridge over 405.

But there’s no way to do that, b/c the map doesn’t allow you to leave comments on the biking impacts of freeway infrastructure. Even though 4th is a city road, city staff have commented in the past that ODOT insisted on preserving the existing layout (with disappearing bike lane) when 4th & Lincoln was rebuilt a few years back. Sigh.

Just tweeted @Jessica_Horning about the issues, and she got the freeways layer turned on, so comment away about all those on/offramp issues, k?

I know profanity isn’t allowed here (well, I know that now), but I think most of the profanity laden comments on that site are from me so far.

…and they were spectacularly unhelpful.

The Red Electric Trail is at the top.

I just found the whole exercise to be frustrating. Not really about to spend 3 hours pouring over these maps. Isn’t this why we have a government to make some of these decisions on our behalf?

I felt the same way. What if everything was this convoluted? My recycling bin is full at the house, and I have identified that I need to take it out to the curb. Also I have identified that I need to vacuum the living room and sweep the kitchen floor. Can someone at ODOT spend a couple hours helping me identify these already known and outlined discrepancies? That’d be great, because I don’t want to proceed with these chores until I gather more information. Oh, and by the way, when I get the data I still might not do any of them.