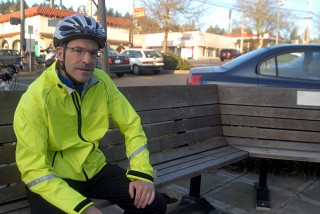 Jeff Knapp has two things to blame for his afternoon rides into downtown and back: a friend and a white stripe of paint.

“When I started bike commuting, that was right before it really took off,” said Knapp, 52. “You could sort of feel it was poised to take off.”

A friend of Knapp’s, who lived in Northeast Portland, started riding to work and talking about how pleasant it had turned out to be. So Knapp, a 20-year resident of the Garden Home area, decided to try.

“If they ever fixed Barbur and made it bike-friendly, it would be a bike highway, you know?”
— Jeff Knapp

“We didn’t move there with the intent to bike. Somewhere along the way, they put bike lanes on Multnomah Boulevard, and suddenly it became realistic to think about bike commuting. … I started, and it really was easy.”

Knapp, who was then working for ODS Companies downtown, spent 10 years biking there, usually via Terwilliger Boulevard unless he was running late enough to use Barbur instead.

“If they ever fixed Barbur and made it bike-friendly, it would be a bike highway, you know?” Knapp said.

Then about three years ago, he started working from home.

“To just stay healthy and get out, I often do the commute that I used to do,” he said.

He and his partner now use bikes for transportation regularly, and often for pleasure too. They never miss Southwest Sunday Parkways. They’ll sometimes ride the Fanno Creek Trail into Beaverton for dinner.

“He’s a bike commuter also,” Knapp said. “He takes the bus in in the morning with the bike on it and takes the bike home at the end of the day.”

Knapp’s pet peeves: a general lack of good north-south routes, the abrupt no-lane-no-shoulder transitions on Vermont, and most of all the complete lack of room to ride on the side of Southwest Garden Home and SW 92nd Avenue between SW Oleson Road and Allen Boulevard.

In general, though, Knapp said he’s “pretty happy with the bike infrastructure we have out here.”

“But then you go to Northeast, Southeast, and it’s like, wow,” he added.

We’ll be here in Southwest all week! And join us Friday afternoon for a BikePortland Get Together and social hour at the Lucky Labrador Public House in Multnomah Village (7675 SW Capitol Hwy) from 4:00 – 6:30pm.