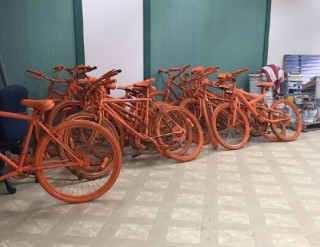 A marketing campaign that has generated backlash in several other cities for its similarity to ghost bikes has been launched in Beaverton and Tigard.

In the past two days we’ve received several reader tips about mysterious, spray-painted orange bikes locked up around Beaverton. One person thought they were a public art project.

Today we asked our friends on Twitter if they’d heard anything and we heard back from Tom at Seattle Bike Blog. He said the bikes were the work of a marketing campaign by a company called Orangetheory Fitness and pointed us to an article about the bikes published by The Stranger back in April 2014.

A few clicks later and we confirmed that Orangetheory has indeed placed the same orange bikes throughout the Beaverton area to promote their new Tigard location.

They posted this on their Facebook page yesterday and a company spokesperson confirmed they have put 14 bikes out in the wild so far: 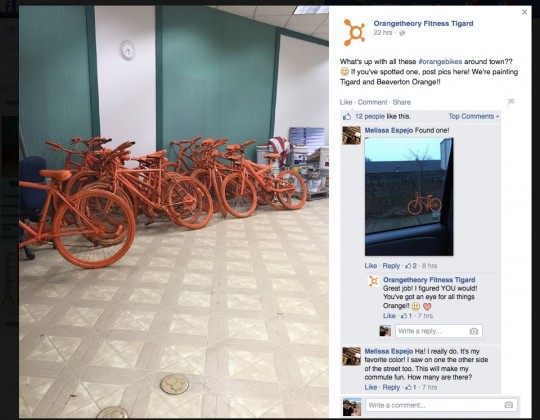 Interestingly, the company has gotten a backlash about the campaign in several cities because of how the bikes are similar to a well-known memorial tribute to people who have died while bicycling. The spray-painted bikes remind many people of ghost bikes, a phenomenon that has deep meaning among bicycle advocates and others impacted by tragic traffic collisions.

Here’s what advocates from Naples Velo, a Florida-based bike advocacy group posted to Facebook after they saw the bikes earlier this month: 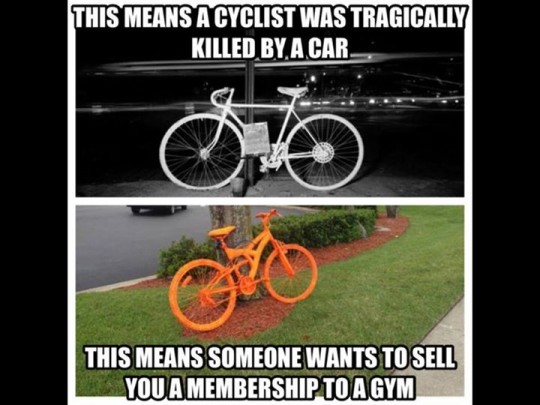 Despite those concerns, it appears as though this company feels the “buzz” and attention the bikes get outweighs people’s sensitivities around ghost bikes.

So far we haven’t heard of anyone being offended by the Orange bikes in Beaverton. People just seem curious.

Have you seen them? What do you think?

I bet they love the free advertising, so why stop?

By posting this article, you’re just playing into their advertising campaign.

Adam. I’m very well aware of that. Thank you. But sometimes we need to tell people what’s going on in their world and that includes informing them about stuff like this.

Is it really playing into a campaign to describe what is going on?

How good a campaign is it when no one could even tell what was being advertised?

Explaining what the campaign is doesn’t change how people react to it, each will make their own decision based on finally knowing what is is about.

I look at it as interesting, but completely ineffective and wonder if the company runs the rest of the business in the same way, without focus and clarity.

An hour ago I sent Jonathan a note asking about the Orange bikes and now here is the answer. That’s reporting!

So are they locked to racks, taking up bike parking spaces? That’s not cool. Or, are they just littering up the City? Also not cool. Hopefully the bike thieves will go after them.

“Hopefully the bike thieves will go after them.”

We have a couple of these gyms here in Jacksonville, FL, 1st thing I noticed was how poorly painted the bikes chained out front are. 2nd thing is the complete absence of bike racks. 3rd was how much their logo resembled the old Cingular Network logo.

just about as annoying as those stupid plastic “I BUY HOUSES” signs you used to see everywhere.

Used to see. I tear them down whenever I see them.

“I tear them down whenever I see them.”

q`Tzal
Reply to  Chris I

Political signs after elections. Stuck everywhere, no one ever cleans up the mess and some of them are made of primo corrugated plastic.
If you get to them before UV damage sets in they are quite durable.

Kind of the color of rusty scrap metal, which is I suppose, the next destination for these pathetic looking bikes. I live in Beaverton, but fortunately, haven’t been yet been visually assaulted by the advertising service these bikes are said to be performing.

I wonder what the city regulations are for this kind of advertising. Also, how long whoever it is that has left the bikes where they are, will be leaving them there.

I imagine they wind up in the landfill. I’d love to learn otherwise.

I have seen three of them, one on Murray, and 2 on Sholls Fy, I dont think anyone will steal them since they are painted with a bucket of latex paint and broom!

At first sight, I thought that it was a new Yellow Bike Project, Portland’s first bike share.

that’s what I thought, too…

I saw the bikes in Beaverton and thought they might have been a reminder about an accident with involving a bike. Now that I know they are advertising, I’m annoyed. My daughter’s teenage classmate Austin Miller was tragically killed on his bike a few years ago. It was an unbelievable tragedy. I still think of Austin Miller and the promise that was lost when he died. The orange bike ad takes away from the important reminders of ghost bikes. Please *stop* this orange bike practice in honor of Austin Miller and others who lost their lives riding bikes.

Hijacking this by bringing up ghost bikes is very disingenuous and reeks of fake outrage. Ok, it’s a marketing campaign you dislike, fine.. but to turn it into something bigger than that is silly.

I don’t think noting the association with ghost bikes that these crummy orange bikes, would very likely evoke, is at all disingenuous.

I’ve no doubt that many people using the road know well enough after seeing them for some years, that bikes painted so that they no longer look as though they’re actively used, likely are placed where they are to memorialize someone that has been the victim of a traffic collision. This being so, it looks shoddy, insensitive, and cheap on the part of the fitness outfit’s publicity campaign to re-purpose (consciously or otherwise.) for profit reasons, if that’s the idea, the ghost bike memorials.

I find it interesting that we have a culture that includes, sadly, ghost bikes. We also have marketers who are clueless and don’t think. One bicycle company came out with a light grey frame with white wheels. I mentioned it to the owner of the the shop but all he could do was shrug. The shops can’t directly control the manufacturers marketing departments … like this situation.

You are being ironic, right, pixelgate?

Here is the money quote from one of the linked articles:

“It’s a very lazy and uninspired way to get people’s attention. Why not actually do something that benefits Orlando citizens, instead of leaving your shit everywhere for us to look at on a daily basis?”

Like the yellow bikes, makes them easier to find when dumped in the river.

I’ve never seen an orange ghost bike… I would never, ever think that a non-white bike was a ghost bike…

heck, I don’t always think of a cyclist death anymore when I see a ghost bike since I found out that they’re sometimes placed when pedestrians die…

I agree with pixelgate that it’s fake/misplaced rage…

Maybe they are just testing the reaction while considering becoming the sponsor for the long-rumored Portland bike share program.

I believe WebTrends was also “testing the reaction” of their controversy generation machine with “should bicycles pay road taxes?”

We shouldn’t give any of these marketers a free pass because they are from out of town and don’t know the customs of our strange land.
If this is important to you let the advertising company and the company that made the advertisement know the error of their ways in loud public ways.

Since the bikes are not vehicles and are left on public and private property for advertising only, they are in violation of city ordinances and the owners can be fined and the painted scrap metal disposed of properly.

I doubt ghost bikes even crossed their minds when they painted these orange.

Better not be any awesome vintage MTB’s in there. Would be a shame to scrape back the paint and see a “Team Fat Chance” logo…..
Department store bikes? Sure, go for it.

They did this in Madison, WI too. You’d think they would have learned:

Ghost Bikes placement: legal because of what? Ignored out of respect or apathy so far?
Commercial advertisements placed without property owners’ permission: very much not legal?

I live on one side of Tigard, and work on another side of Tigard. I haven’t seen these bikes, nor have I ever heard of this company.

That said, I do find this company’s lack of empathy and sense to be disturbing. As a Tigard resident, you can count on me to contact the company and ask them to take these bikes down.

I’ll also contact the City and ask them to remove the junked bikes “someone” is leaving around town.

Thanks to this article confirming the orange bikes are an advertisement, my company has asked the owners of our office building to remove it from the property, or give us permission to remove it.

Permission to remove my a$$: we have a “horrible” bicycle theft problem in the Portland metro area, don’t we?

They remove, we remove, someone with tools and free time removes it in the dark of night (wink, wink)…. it will be gone soon.

Alternative idea is to thoroughly u-bolt a large plywood sign to the orange POS crediting Orangetheory Fitness with the eyesore. I’m thinking it should be 4×8 and purple with neon green lettering. Those colors look great with orange, right?

Reverse Viral Marketing! SWEET!
Should be paired with hashtagged photos in a twitter smear campaign.

Dwaine Dibbly
So are they locked to racks, taking up bike parking spaces? That’s not cool. Or, are they just littering up the City? Also not cool. Hopefully the bike thieves will go after them.
Recommended 3

It’d be difficult to litter-up Beaverton. I think the bikes and the scheme fit Beaverton’s culture perfectly.

This is more similar to the yellow bike program from a few years ago except that it’s harder to steal the whole bike.

I sent Orangetheory corporate a nastygram complaining about the bikes. Got an email this AM that the bikes are being removed 🙂
Guess they were getting some real grief over them!

If these are not someone’s actual working bikes, is it legal to lock trash up all over town and call it advertising?

Wow people need to calm down. It’s a fun way to get attention, and they removed the bikes after hearing the complaints. PDX bike culture needs to take a cue from PDX Yoga culture and namaste…and you wonder why most people hate bikers around here (and I bike to work). Panties all up in a bunch over a company putting out a few orange bikes to try something new? Seriously. It’s not the end of the world, they’re not demeaning the ghost bikes. It’s just a marketing ploy that wasn’t received well and they responded by removing the bikes. Move on.

They’ve been spotted in the Llloyd District as well now. Aside from possibly playing off Ghost Bikes, they’re clogging up bike racks with their “promotion”. Totally lame