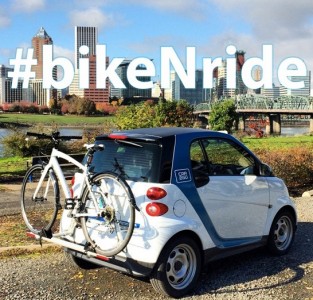 After what they call a “tremendous response” from a member survey, car2go announced today that they plan to outfit 50% of their Portland vehicles with bike racks.

Last month we reported on the company’s pilot of a bike rack for their Smart cars in response to requests from members. They put a few of the racks out on the road, got them in the hands of testers, and launched a member survey. Car2go’s Chief Marketing Officer Paul DeLong announced the results of that survey in an email to members today. 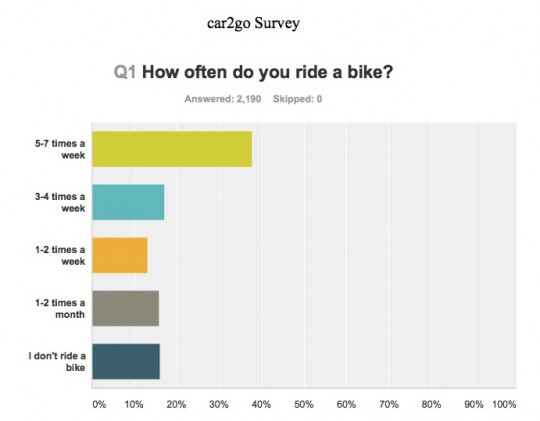 The new racks will be able to carry two bikes and members will still have access to the trunk via the rear window. When members pull the car2go app on their phone, there will be a special symbol for cars equipped with the racks.

They even made a little how-to video:


DeLong said if the program continues to go well in Portland, they’ll consider it in other cities.

“On behalf of car2go,” he wrote, “we are truly energized to launch this new initiative in Portland, and help provide a transportation option that continues to enable Portland to be the #1 bike-friendly city in North America.”

Awesome. Two bikes, even though the test pics and this video show one? Is that right? If so, extra good news.

I was thinking the same thing…perhaps the second bike is a Brompton and its inside via the rear hatch. 😉

It says in the email I got:
“The bike rack will include an additional rail for those needing to tow a second bike from Point A to Point B.”
So I guess there’s an attachment in the trunk.

That sounds to me like just a two bike rack. I don’t think they like to have anything removable on the cars. Reduces theft and user error.

Reading a paper on the future of smart and connected cities, it indicated an expectation that the trend of transportation moving from an owned asset to a service is likely to continue. That said, and with Car2Go as a prime example of that new paradigm, why hasn’t Car2Go, or even TriMet, moved into the bike share void in Portland, thoughts?

Funny you should mention that. Smart does manufacture an ebike: http://int.smart.com/en/en/index/smart-electric-bike.html As with the smart car, I don’t believe they sell well to end users. An on-demand bike rental service might be a way to put them to use.

This is a great business model. The externalize vehicle storage costs by using public streets. Would street fees be applied to them if that comes to pass?

“An aggregate analysis suggests that carsharing has taken between 90,000 to 130,000 vehicles off the road. This equates to 9 to 13 vehicles (including shed and postponed auto purchases) for each carsharing vehicle.”
http://tsrc.berkeley.edu/vehicleholdings

So they actually reduce the externality of the loss of public space resulting from the free storage of privately owned vehicles that streets provide.

So that would equate to 10,000 (very new) vehicles purchased by carsharing companies. How long are these kept in the fleet? I bet a lot less than the 11 years (= the age of the vehicles ostensibly shed by those who preferred the carsharing approach). It seems like we would do well to analyze not just the ghost fleet not purchased or retired, but the carsharing fleets as well.

That is an interesting study, which I won’t dispute but using it is a red herring to my point. Being that a commercial enterprise is getting a subsidy for vehicle storage that property owners are being asked to pay for.

Or ~$1200 per car, which is just over 500 hours per year of metered on-street parking per car. Not sure the formula they used to get there, but seems pretty reasonable to me.

I don’t get it. So I would drive somewhere to go for a bikeride and then have to bike ride home if someone else takes my car2go?

Clearly, you don’t get it.

RH
Reply to  Chris I

I guess not. When would you use this bike rack? To explore new areas of pdx ? So you’d put your bike on, drive, go for a ride , and then bike home if there isn’t a car2go around? I’d use it if my bike broke, but that rarely happens .

I’d even use it I got a flat. That only happens a couple of times a year, but repairing one outside in inclimate weather sucks.

And BTW, I’m not the chris you are responding to. Small “c”.

I’m with RH. Although the cars2go are cute and trendy, to me their small size and payload seem like they duplicate pretty much exactly what I can accomplish on a bike, except I have to have a smart phone and an account.
Adding a bike rack is clearly a win for a certain demographic that uses these cars for sport(?) but it doesn’t seem like a logical move to me if we’re talking about transportation.

Car2Go is the bomb if you’re biking across town, have your derauiller fall apart, and want to get to a movie in time.

Now, you’ll be able to bring your bike with you instead of leaving it locked up on some forlorn corner.

You actually don’t have to have a smart phone (but it does make it easier to locate the nearest car), just an account.

Car2Go allows you to “keep” the car reserved for you (i.e., it remains “In Use” by you while parked and thus unavailable to others) so that it’s there for you when you’re done with the bike ride and wish to drive back. But the clock is ticking and you pay for the time the car sits idle.

It’s the same as taking your bike on the MAX or the bus. It just gives people choices to make multi-modal trips.

“It’s the same as taking your bike on the MAX or the bus.”

Yeah, well, not in my book, but I don’t care for cars of any stripe.

Wouldn’t have guessed that.

Thanks, this makes sense .

I like the idea because if I have a mechanical I can’t fix on the way home from work, I just throw my bike on a car2go and for a few bucks I drove home in comfort!

This. When I go for a ride in the city I carry my ID, debit card and Car2Go member card in case of a mechanical I can’t fix with tire irons, a patch kit and a multi-tool. Only had to use it once but it’s nice to have just in case.

The largest demographic for this idea has to be mountain bikers, who have to drive to ride.

I always thought one of the best features of a mountain bike was that, unlike a lot of other varieties, it was a go-everywhere bike.

They are, but if you want to ride quality trails that would mean a 50 mile, one-way ride. I don’t see many people putting on 100 miles to ride singletrack, except those crazy distance racers.

That’s crazy talk. How did a bike—a bike!—become so specialized in its function that to enjoy it you need a car?

Except you can’t even leave the car anywhere in all of Portland (the zone stops at E 82nd), let alone outside Portland. The fees get pretty high if you would want to drive out to a place like Sandy Ridge with a car2go (except when they have their $50 weekend deals).

Ah, I didn’t know about the “rules.” Thanks for the clarification.

2) Now I can buy bikes at the bins even if I didn’t bring my cargo trailer.

Ted Buehler
— I’m one of the people that has shed a car, in part because of the availability of carshare.

The one-way trip with bike option will open up new possibilities.

Like, for instance, if you lived in SE Portland, you and a friend could drive up to Portsmouth and Willamette Blvd, then ride back hope via the St. Johns Bridge, Leif Ericson Trail, and Springwater Corridor.

If you live in the middle of the Car2Go area, or don’t mind riding more miles to do a full loop by bike, or like to go riding at hours when the roads are jammed, its not for you.

But, there’s possibilities out there.
http://portland.car2go.com/wp-content/uploads/2013/09/PortlandHomeAreaMap.pdf

Or, if you need to bring some bulky stuff to work, you can drive one way with the heavy stuff and your bike, then ride back home light.

They’ve been advertising the code “CAR2GOLIFE” if you’re going to sign up. 30 minutes free and no sign up fee. I think it’s still good.

I’m not an everyday bike rider, but this will make me more likely to take my bike to work with me on a Car2Go and take a leisurely ride home if the weather is nice. It’d be cheaper than a $5 TriMet day pass (I work about nine or ten minutes from home in a car), and less stressful than trying to ride to work quickly on streets I’d rather avoid.

I’ve just started riding again over the past few months, so dealing with rush hour commuters on the fastest route to work isn’t something I really want to do quite yet, but taking a longer but quieter route home when I’m in no hurry is appealing.

For me this is great news!

I think this is really exciting, and I am going to sign up now while there’s still 30 free mins. Maybe I am superblind and just missed it, but is there information on when they plan to have the racks installed?

There are many possible uses for this, way to go car2go! For me, this sort of arrangement is perfect for when I’m already out on my bike, miles and hill climbs away from home, and then some other compounding factor arises–trimet not running, weather, injury/illness–which can inspire me to seek out options to get a ride home with my bike.

Another thing this does is allow me to take my bike with me on the first leg of my trip, and then bike home. I would use it in the same manner as I do a Trimet bus rack for when I want a lift with my bike on part of my journey.

The thing I don’t get is why the bike rack has to an either/or thing when it comes to using it or the trunk? The situation I’m most likely going to want to do this is when I’m out on my bike and I decide to get something that is too big to fit on my bike rack so want access to the trunk and to carry my bike. Yes, the trunk space can be access from the inside but it’s not the easiest thing to do.

The passenger seat will be more cargo space than the trunk though.

Not a Car2Goer, but it seems the real advantage it to ride your bike to Car2Go that is to far away to walk to pick it up. Then load your bike and off you go.

Nice design and great decision! On the video though, you should show the wheel chocks being undone first when removing the bike, then undoing the strap on the seat tube.