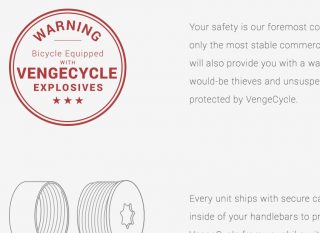 Here are the bike links from around the world that caught our eyes this week:

Modest anti-theft proposal: VengeCycle.com promises to “make thieves think twice about taking your bicycle” by strapping a GPS-activated explosive to the handlebars. (“Damage is generally limited to the hands and is not considered lethal. … You will have to purchase a new handlebar. … Make sure to check that unlicensed use of explosives is legal in your state beforehand.”)

Open streets: Here’s a map of every ciclovia festival in the Americas, Sunday Parkways included.

Nondriving dividend: Why is New York City so rich? The $19 billion it saves annually through low car ownership can’t hurt.

Road-rage verdict: A woman who deliberately sideswiped a Seattle man while he rode his bike on a neighborhood greenway, then fled, was found guilty Friday of second-degree assault.

Bike-through brawl: When a man on a bike refused to leave a Florida Taco Bell’s late-night drive-through window until he was served, employees called 911. He got in a fight with police and was arrested.

Car man: When a Beijing resident tried to beat a traffic jam by driving in a protected bike lane, one fellow stood in the way.

Bono’s wipeout: The U2 frontman’s “high energy” bike crash, caused when he swerved to avoid someone else riding through Central Park, broke his arm, his left eyesocket, his left pinky finger and his shoulder blade in three places.

Signal jamming: NYC activists crashed the 50th anniversary celebration for the Verrazano Bridge with a 200-foot banner calling for it to add biking and walking paths.

Autonomous taxis: Skepticism of driverless carsharing reminds Morgan Stanley automotive analyst Adam Jonas of the case against cars. “Why would any rational person want to replace the assuredness of that hot horse body trustily pulling your comfortable carriage?”

Finally, your video of the week is a time capsule of impressive fixie tricks from 1965. (BP reader Jessica Roberts also notes that Yokoi’s costume would look great on every BMX freestyle performer.)

CORRECTION: The original version of this post referred to VengeCycle.com as a “spoof site.” The CEO of VengeCycle says that while the product is “unlikely” to ever be sold in the U.S., it is “unquestionably a real product.” We regret the error.

Monday Roundup gets better all the time! Very impressive lineup of treats. Thank you, Bikeportland!

Totally agree! I don’t often comment on this column, but I look forward to it with interest every week.

In the Chinese news item…in addition to the car directly in the photo there is a second car approaching the cyclist in the separated bike track.

Have the Chinese not heard of bollards?

That “superhighway” is awfully narrow to be called “super”.

I’ll bet there aren’t any pedestrians on it, though—and probably no broken glass or light poles or dogs, or signs or storm drains to have to dodge. I’d love a path around here where I could hold a line without having to weave around any of the above or get face-whipped by overhanging blackberry vines.

I gather that for various reasons it’s not cool to like Bono or U2 anymore, but speaking as someone whom The Joshua Tree is still just about the greatest album of all time, man, that was a nasty crash, and I’m sure I wish Bono a full recovery. BikeLobby, whose tweets I generally get a laugh out of, crossed a bit of a line that day, I thought.

The ebike / density argument has its merits, but it is missing two critical reasons to have an ebike. Reasons that apply even in dense cities.

1) fun.
2) speed. Not because I want to be fast, but because I feel safer not getting passed by cars on narrow residential roads.

It will be easier and cheaper to use an E-bike than tear up the suburbs and build closer in, one thing there’s just too many people.

Great news on the e-bike front: Moab BLM bans e-bikes from non-motorized trails! I have always considered a two wheeled vehicle with a motor a motorcycle and it appears that the BLM agrees with that view. http://reviews.mtbr.com/moab-blm-bans-electric-bikes-on-non-motorized-trails

While I don’t totally disagree, splitting user groups apart and attacking individually is a tried and true sierra club tactic for eliminating use of trails entirely to allow their actual end goal, having the trails grow back over and become unusable.

Is the VengeCycle ‘sold’ anywhere? Seems like most civilized nations have laws to keep citizens from blowing up other citizens, thieves or not.

From the current issue of “The Nation”- “..one in every twenty two people in New York City is a millionaire, while 56,987 New Yorkers live in homeless shelters.”

Hey! My wife and I are on the masthead! I feel honored. And possibly a little bit like I’m going to be hunted down by deranged OregonLive commenters.

Why not an exploding seatpost that sends a slug upwards, through the saddle? (I can’t believe we’ve come to the point where anybody thinks that it’s a good idea to booby trap a bike.)

If a seat is a saddle, why isn’t a seatpost a saddlepost and a seat tube a saddle tube? Why isn’t a saddle bag a seat bag?

Why do people drive on the parkway and park in the driveway? :p

I agree it is a terrible idea to booby trap a bike with explosives (not least because it would get you into a LOT of trouble in this Homeland Security era), but I’m not above booby trapping a blinky light with a sharpened, hard-to-see thumbtack to slice up the finger of someone trying to remove it.

Unlicensed explosives are, I believe, what inflates airbags in most modern cars. Presumably the explosive power is along those lines. (But I’m no expert)

That video about the Transbay Terminal, once and future, is a fascinating document. You could say this is the fulfillment of many long unfulfilled promises of the late 20th Century US: re-build multimodal transit so that people using all the non-car modes can efficiently connect, get where they want to go, and, while we’re at it, make it attractive and well lit. The Transbay Terminal, in my experience (1991-2004), had become a pretty dark and grimy place with little hint of its past glory.
But the sad irony is that this is a 20th Century project a couple decades too late. Every brick and piece of wavy glass and LED artwork in that gargantuan piece of hopeful infrastructure is premised on the continued availability of cheap fossil fuels and electricity made from them. It will be interesting to see how this project meets the actual 21st Century needs of the people of California, once it opens.

The article regarding the NYPD enforcing “Vision Zero” is hilarious given the stated goal and the means delivered to reach the end goal. “The fundamental message of Vision Zero is that death and injury on city streets is not acceptable… [unless injury is the result of bringing compliance of Vision Zero against non-violent users]”

…hilarious, but not LOL hilarious…

It seems the only way to be “safe” on the road is to be in a car.

It would seem to me that if the Police Department in Anytown, USA (not just NYC) wanted to apprehend scofflaw cyclists, they could do it just like they would for scofflaw drivers: pursue them with a police vehicle with lights, sirens, and loudspeaker until the vehicle operator pulls over. If they don’t pull over after a few blocks, I guess they could be considered to be attempting to elude. But still, there have to be better ways to take your lumps for a traffic violation other than literal lumps.

I want to see that officer crash his patrol car into speeders and red-light runners to stop them… see how well he fares in the media then.