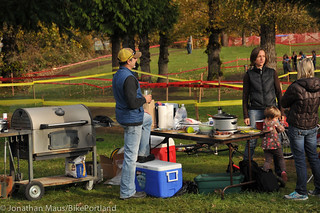 Which Cross Crusade team has the
best tailgate party?
(Photo by J. Maus/BikePortland)

When you mix one of the largest cyclocross scenes in the world with promoters who focus on the fun as much as the competition, you end up with events where there’s almost as much action in the team pit area as on the race course. This Sunday, the Cross Crusade pits will be even livelier as series organizers host the first-ever Tailgator Competition.

Cross Crusade Race Director Brad Ross says the tents add to the festive feeling of the day. Ross told us this morning that he got the Tailgator competition idea from Mt. Bachelor Ski Resort. “During spring skiing in April,” he said in an email, “the passholder parking lot always turn into a big tailgate party by about 10:30 in the morning. So the ski resort turned it into an actual judged competition on the last day the mountain is open. It’s pretty fun.” 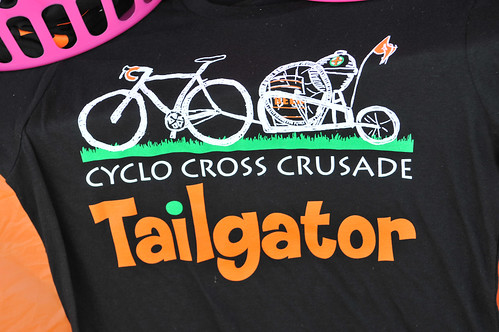 The competition is open to all OBRA sanctioned teams that show up for this Sunday’s event at the Washington County Fairgrounds in Hillsboro. 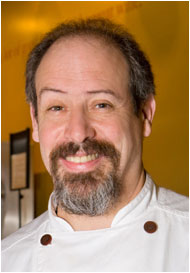 Chef Higgins, of the eponymously
named restaurant, will help judge.

The competition will be based on which team does the best job impressing a panel of judges. So far the judges are Ross, chef/owner of downtown Portland’s Higgins restaurant Greg Higgins, and Ross’ wife Melodie. Ross and Higgins will judge the food and drink offerings while Ms. Ross will critique the overall ambiance of the team’s tent and other, non-food offerings.

Teams are already busy strategizing about how to make the best impression. Ross has heard one team is planning a manicure/pedicure station, another is bringing in a masseuse, there are rumors of a wood-fired pizza oven being brought in, an on-site tattoo parlor, and there’s even a team that has hired local celebrity chef Chris DiMinno to cook up some succulent specialties just for the occasion.

Sue Hanna, a member of Oregon Bike Shop Racing Team said their tent will be, “Hell’s Kitchen meets Buffy the Vampire Slayer.” So there’s that.

If your team wants to compete, check in at the Cross Crusade merchandise tent in the morning where you’re receive a number to pin on your tent. Judging will take place between 11:30 and 1:00 pm.

Stay tuned on Monday when we’ll share photos and highlights from some of the entrants.

What no wood fired hot tub?!

I hope it is as nice as it was last Sunday…fall sunny day…it was ‘East Coast’ autumn gorgeous!

Pretty sure you mean massage therapist, not masseuse.

Wonder if whether the set up is delivered by bike or motor vehicle factors into judging. I’d reckon a great team pit delivered by people power (as per tailgator logo) should get extra points!

I’m always amazed at the planning that some have for race weekends. I’m usually just happy that I remembered an extra inner tube and my knee warmers!

= portable gas powered blender?
Or do they mean tailgater?