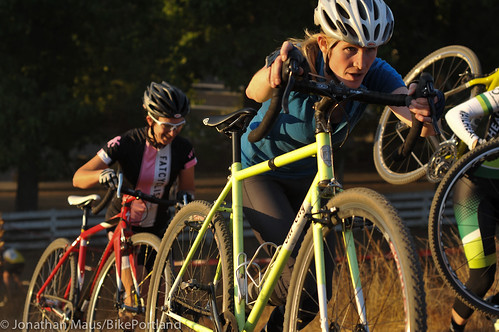 How did our guest author do her second time out?
(Note: That’s not her in the photo.)
(Photos by J. Maus/BikePortland)

This is Rebecca Hamilton’s second article in a series about her introduction to cyclocross racing. Read last week’s installment here.

It’s Week 2 of the Blind Date at the Dairy cyclocross series and here I am again, back for more.

“I’m a bottle rocket in tailspin and I know it, but I’m too drunk on my newfound velocity to stop.”

I wander over to where Portland Bicycle Studio leads their skills clinic and someone waves me toward the group. I know who that is – it’s Molly Cameron. I’ve met her once before, back in June when her shop was opening early to show the Tour de France. She’s quite nice. “You can leave your bag at our tent if you want. :et us know if you have any questions.”

I do have a question. I’ve only had skinny-tire road bikes before and last week’s race was the first time I’d ridden on the fat, knobby tires that all the cyclocross kids use. They kind of weird me out. “What pressure should my tires be at? I’ve got these at about 80 psi. Sound about right?”

Molly looks at me for a moment and blinks.

I know this look. It’s the same look that my family in Ohio gives me when I tell them what I’m doing with my life here in Portland. A look that says, “I can’t tell if you’re kidding. I’m concerned that you might not be.”

“Well, so… you want to be running at less than half of that. Go let some air out of your tires.”

To forty? Who runs their tires at 40 psi? That’s practically a flat. It would be like riding on gummy worms. I know I had my tires pumped up high last week and I did OK. I hold out a moment to see if she’s being silly. She’s not.

Molly runs a bike shop and I’ve heard she’s a pretty good cross racer, so I am willing to give her the benefit of the doubt [Editor’s note: Molly is a veteran professional racer.]. But I’m still suspicious as I hiss the air from my tires. As the Beginner Womens category lines up at the start, I ask around. “Hey, how’s it going? What pressure you running there?”

And once again, we’re off! Immediately I can feel that something is different. Last week I’d been rattling around so much that by the end it felt like I’d just had a half-hour seizure (which I’d assumed was normal) but now I’m gliding over the rocky straightaways like butter across a hot pan. And I seem to be faster… What’s going on?

I cut through a gravel swamp and snake through a series of curves as words from an ancient physics class form Tetris pieces and and fall into place: suspension losses-contact patch-traction-friction-rolling resistance… The tires! The pressure! Molly totally knows what she’s talking about. I’d started somewhere in the middle of the pack but I’m steadily passing riders left and right until at some point, there’s no one ahead of me. I accelerate.

But it’s not the smooth, controlled acceleration of a NASA shuttle launch. I simply do not have the bike handling skills to match my speed upgrade, which wouldn’t be a problem if I had the sense to slow down once my corners started getting sloppy. But I don’t. I’m a bottle rocket in tailspin and I know it, but I’m too drunk on my newfound velocity to stop. 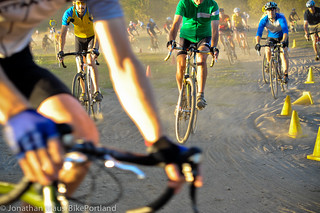 Inevitably, gravity does the stopping for me.

And now I am off the track having a pitiful conversation with my rear wheel. “Spin,” I explain helpfully. “Grrrrrrngggk,” it retorts, and mutters something snarky under its breath about speed not being a substitute for control. We glare at each other as every rider I’d passed now passes me by.

A guy from the crowd steps over and I have a small heart attack as he bends the derailleur hanger back into position with his hands. That may or may not be the right way to do that but hey, the wheel is spinning again.”Is your leg OK?” he asks as I re-mount.

What leg? I look down. Hmm… eww. But I’ve got no time for that now. I’m from the Midwest (regional motto: “Suck it Up & Walk it Off”) and I have a race to finish.

Which I do, in 14th place. Eleven spots lower than last week. Womp-womp.

My lower leg and ankle seem to have gotten tangled in the chainrings during my crash. It’s not horrible (my best friend will later tell me that it looks like I got attacked by a dachshund) but it could use a few Band-Aids. I shuffle over to the First Aid station and have a seat while the medic works on another racer.

As I sat there, I realized I never really understood why there were teams for cyclocross racing. This isn’t like a road race where you need a coordinated pack of riders to block wind for the sprinter. Maybe there’s a bulk discount on spandex onesies? Otherwise, why bother?

I watch the racer beside me. The medic is cleaning some furious-looking scrapes and it just has to suck. But she’s got three – count ’em, three – teammates around her. Someone’s got an arm around her, someone’s giving her a hand to squeeze, and her team manager is distracting her with jokes. “I’m sorry, hon. We’ve got no choice but to amputate.” She’s laughing even as the medic pulls gravel from her knee.

Tire pressure, trusting advice, and teams — that’s about all the learning I can handle for one night. I’m heading home. I’ve got seven days to learn how to ride my bike before the next race.

I laughed out loud at the “conversation” you had with your rear wheel. I’ve never had a wheel get snarky with me–at least not yet. Too funny. I’ve been wanting to try cyclocross for a couple of years. Heck, I’ve even got a cyclocross bike. Just might have to do it one of these days.

It’s interesting how people coming to cross from the road don’t sometimes believe how much lower pressure they need. And sometimes with mountain bikers it can be the opposite: can’t believe that their tires should be harder.
Tire pressure is an art.

I run MTB tubeless pressures down into the mid 20’s some days depending on the terrain. next maybe she’ll trust to pin her number on so the officials can read it, don’t urinate around race courses without using the correct facilities, give money to the velodrome, and listen to every single thing Candi ever says.