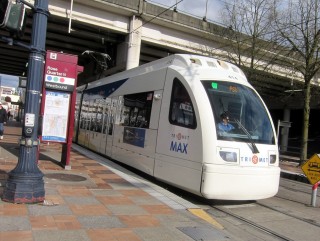 Not rolling west from the Rose Quarter for a week.
(Photo: M.Andersen)

It’s likely to be one of the hottest weeks of the year, but Monday, Aug. 11 through Friday, Aug. 15 is looking like a good time for east-side MAX riders to test non-air-conditioned alternatives.

The 10-block light rail connection between the Rose Quarter Transit Center and Lloyd Center, probably the highest-ridership stretch of rails in the TriMet system, will close for track and switch improvements that week, adding an estimated 15 to 30 minutes to trips in or out of the central city.

TriMet has full details about the temporary shuttle-buses that will connect the two stops through the week. But it doesn’t mention the fact that for everyone going to or from much of the east side, a bicycle will probably become the fastest link to the Rose Quarter and downtown during rush hour.

If you or someone you know has been waiting for a reason to learn your options for a bike route, seems like good timing.

And if it doesn’t take, no harm done.

“The switch replacement is part of ongoing investments that ensure our system remains safe and efficient for years to come,” TriMet’s news release says.

The switch at NE 11th and Holladay has been in awful shape for a number of years now. I’m glad to see they’re finally replacing it!

Thank our lucky TriMet starts that they’re working on that treacherous gauntlet of dips, ruts, and whoop-de-do’s that comprise the rail switching area in the intersection of NE 11th & Holladay, one of the worst handicaps in the junction of NE/SE bikeways.

Here’s to hoping that the outcome includes safer/smoother surfaces for the long term (I hope they’re using something more resilient or elastic than asphalt).

A long stretch of Eastside MAX maintenance 6 years ago in August was my inspiration to start bike commuting in Portland, and I’ve never looked back. It took facing an obnoxious delay to get me to ride for a few days in a row, but it ended up being so much nicer that it wasn’t a temporary change for me.

Does anyone know if this planned work will:
1) add heated switches for improved winter operations, and
2) if these switch areas (if in the rightofway) will have an improved design to be safer for bike and Ped traffic?

“TriMet said crews will replace the MAX track switch as well as track turnouts and infill between tracks and ties during the week.”

Vote Up0Vote Down  Reply
« If you could change one thing about Sunday Parkways, what would it be?
Even a 6-year-old can feel Portland’s massive bike theft problem »