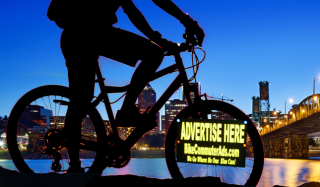 Here’s an idea: a local business is setting out to sell ads attached to each side of local bike commuters’ front wheels.

“It’s a first-of-its-kind-in-the-nation business, because it’s basically for the bike commuters, the year-round riders,” BikeCommuterAds.com founder Gary Courter said in an interview Tuesday. “They’ve been riding green all this time for nothing — years! — and we’re trying to change that.”

An ad on one of Courter’s riders’ private mobile billboards will start at $150 a month with a 12-month contract. Each month, two-thirds of the revenue goes to the person on the bike, Courter said.

Participants, who must be at least 18, share their “general territory and route” with Courter and sign a contract promising that they commute to school or a full-time job by bicycle. Future advertisers will be able to select billboards that ride through whichever areas of the city they want to target. Riders have the right to refuse any ad, and pay nothing other than taxes on any money they receive.

Courter’s colored vinyl banners can be fixed in place to each side of the wheel by the $6.50 wire brackets he’s designed. Each vinyl sign costs him $25, he said, so he’s hoping for long-term contracts with advertisers to keep costs low.

Courter, 58, said he bike-commuted himself to his job at Foreign Engine Service in Southeast Portland until an Achilles tendon injury about 10 years ago. He said the business concept came to him two years ago while driving home from his mother’s home in central Oregon.

“I didn’t let that idea die,” he said. “I just kept pursuing and pursuing.”

Among the things he’s realized since then: that the bike billboards may be valuable not only during their owners’ commutes but while parked all day along busy streets; and that businesses might use the service as a way to give a tax-exempt raise to their own bike-commuting employees. 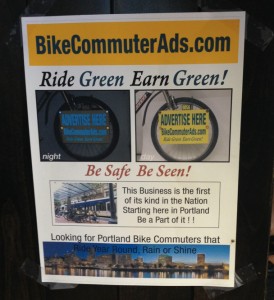 A BikePortland reader sent this photo
of a BikeCommuterAds.com flyer.

“I’ve rode year-round before, and you’ve got lighting in the front and the rear, but from the side you’re just a blind zone,” he said. The reflective text on the winter signs he’s tested would change that, he says.

It’s a side business for Courter, who started working at Foreign Engine Service when he was 21 and bought the shop 24 years later, in 2001.

“A lot of shops are having a hard time, struggling, in the automotive industry,” he said. “They say it’s been hardest for the honest shops.”

To sign up, participants bring their bikes by Courter’s shop near the Springwater Corridor path. He launched in early May and plans to install his fourth billboard on Wednesday. He hasn’t lined up any advertisers yet, so the first few riders are working on spec for now. Any rider who qualifies can submit an application on Courter’s website.

Courter is excited to be bringing his vision to market, though he laughs about reactions like one from the man he was trying to buy general business liability insurance from.

“He was looking at my website and the agent, he goes, ‘I don’t even know how to classify you,'” Courter said. “It’s been a crazy road. … I told my mom, ‘If this doesn’t go in Portland, it won’t go anywhere.'”

I cannot in good conscience support such a business.

I was looking for iambic pentameter but was disappointed.
Read to battle rap beat?

I’m a natural for this! I’m super-visible because I’m always riding on the sidewalk, riding the wrong way in the bike lane, and splitting the lane. What great exposure for the advertisers!

I was going to comment with some pissy snark, but that is already covered

As distressing as the billboard-ification of every available surface in our lives is ya hadta know this was comin`.

Maybe for next year’s WNBR we can all sell ad space on our backsides.

Think of it this way: in 12 months you might be able to fully pay for a decent new bike. I can imagine this would be a great incentive for a lot of people who don’t have a lot of resources.

I have never considered advertising for my lighted bikes and raincoats and I never will.

I think this sounds great. Will be filling out an app.

This is also a great way for the local homeless population to earn some cash.

According to the contract linked to, one must be at least 18 years old and either a full time student or full time employee using your bike to commute daily.

Which is really kinda silly. My bike is sitting tucked away in the corner of my office and will only be seen for a little more than an hour a day. Compare that to someone that who is out on the bike all the time.

You’d have to pay me a lot, and I don’t see how that pencils out. I could do it with political statements on my own, but not for money.

I was biking around Budapest a couple of days ago and saw this 3 wheeled bike with a giant billboard.

I have spoken to Mr. C. at great length in his endeavors and about this business of his to be honest its hard to get him to shut up you try and leave and he will follow you out to your car still yammering about his grand scheme of things, you literally hafta shut the car door roll the window up and driveway before he gets the hint that you are not interested in hearing him talk over you instead of to you,
His idea is sound, his managing of it is flawed, for example he has no plans of finding as he calls it sponsors in our world we call it contracts, he has not gone out and forecast his business, why? you may ask is because he is in firm beliefs that it is the riders responsibility to find clients for his business? huh… where is the logic in this?… how does this work you might ask well quite frankly he has all the charm of a snake oil salesman everything looks good on paper and in proposed monies collected for payment of his companies riders , but what the rider is not privy to is the fact that it is the riders responsibility to go out and as he calls it Sells Him/Her self… so all of the riders he currently has are under the false ideals that they are contracted to carry his signs for his company in lieu of future mounting of Contractual Contracts that are not being sought after.
Now I am sure there is a smart individual out there that is currently riding for Bikecommuterads.com ask yourself this are you being payed to ride around with his signs on your bike ? if not why? you did sign a contract to entitle you to be payed for advertising a company and to LEASE your personal space …just food for thought