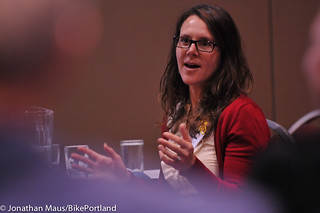 The Portland Bureau of Transportation has hired Margi Bradway to be their new Active Transportation Division Manager. Bradway, 40, comes to PBOT from the Oregon Department of Transportation where she managed the agency’s Sustainability Program and more recently became their lead staffer on active transportation policy. Bradway was also a close adviser to ODOT Director Matt Garrett.

Margi is a long time Portland resident with a background in environmental science. Before law school Margi worked for the National Wildlife Federation in Washington, D.C. on national wetlands policy. During law school at Lewis and Clark College, Margi worked for the U.S. Environmental Protection Agency and the Oregon Department of Justice in the Natural Resources Division. Margi was also an environmental attorney at Stoel Rives.

At PBOT, Bradway will take over the position left vacant after former Active Transportation Division Manager Dan Bower left the agency to run Portland Streetcar back in March. As head of this division Bradway will report to Transportation Systems Group Manager (and former city traffic engineer) Rob Burchfield and she’ll oversee staff that runs a variety of programs. 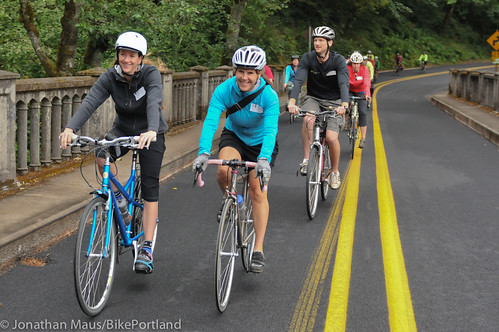 The Active Transportation Division at PBOT is responsible for planning biking, walking, and transit access as well as general traffic safety programs. The division is also in charge of, “ensuring the community has the tools and knowledge needed to achieve the goals adopted in the Portland Plan as well as the bicycle and pedestrian modal plans” according to the official job description.

In her new role (which offered an annual salary range of $90,000 to $120,000), Bradway will oversee such well-known programs as Safe Routes to School, Sunday Parkways, the SmartTrips marketing initiative, and more. She’ll also be responsible for project funding and budget development.

Bradway’s varied experiences at ODOT should serve her well. In the time I’ve known her, she’s proven to be an expert on everything from the minutiae of federal and state budget details to less wonky pursuits like hastening organizational change. Most recently, we wrote about her innovative effort to use GPS ride data from Strava users to help inform ODOT policy.

Back in January 2012 we shared Bradway’s remembrance of the late Gail Achterman, a former Chair of the Oregon Transportation Commission who had a broad influence on active transportation statewide. Bradway’s feelings about Achterman, which I’ve pasted below, should help us understand what type of leader she’ll be at PBOT:

She [Gail] could take in immense amounts of complex and technical information – not only about transportation, but also about the environment, equity and economics – and then she could figure out how it fits together. This ability, along with the ability to build partnerships and coalitions, was what made her such an effective Chair of the Transportation Commission…

Gail was also persistent. She was passionate about sustainability, biking and walking and the environment. But she knew how to channel those passions in through the administrative and legislative process… Prior to Gail’s Chairmanship, ODOT was a highway agency. At the end of her tenure as the Chair, ODOT was a different agency. One that was more multi-modal and integrated.

Bradway lives in North Portland with her husband Scott Bradway and their newborn child. She and Scott can be found most weekends — especially in the fall — racing their cyclocross bikes in mud and dirt across Oregon.

“Prior to Gail’s Chairmanship, ODOT was a highway agency. At the end of her tenure as the Chair, ODOT was a different agency. One that was more multi-modal and integrated.”
That’s great for Ohio…

Someone should look into the amazing influence Lewis and Clark graduates have had on bicycling… Craig Beebe, Margi, erik tonkin, earl blumenauer, yet the only bikable route to Lewis and Clark, Barbur, still sucks

Barbur is not the only bikable route to Lewis & Clark. Many enjoy a lovely ride through Riverview Cemetery every day.

Catherine Ciarlo, Meghan Sinott, Ellee Thalheimer, and I are also LC alums…as are YOU (don’t be so modest).

What was her role in the review of ConnectOregon Grant applications, and was she one of the folks covering up PBOT’s lie re: having secured a bike sponsor? Honesty is important to me.

She worked at ODOT. What is her legacy there? Did she get anything done outside of Portland? Because from my standpoint I never see any active transport being funded outside of Portland. Here in Salem ODOT is quite happy to fund widening roads and support new unneeded bridges across the Willamette.

Congrats, Margi! The bio above neglected to mention your Ultimate Frisbee prowess!

I still know her as the author of the CRC EIS and champion for the project. But I think she’ll do great things in this new role. She’ll be great.

Her legacy within ODOT is that she is that she was completely tireless. She had her pulse of the agency for everything active transportation. She helped shape breaking down silos of agencies within ODOT to listen to bicycle pedestrian advocates. She elevated ‘our’ voice in all things transportation. Always on the go, but able to listen when button holed about substantial issues, it was always great to quarrel and play devil’s advocate about the best method to have the OTC listen to us. That greatness was really dependent on the fact that she had respect for us and could be a consummate listener. People are always more important than roads and ODOT has a giant bridge to replace in Margie’s empty post.