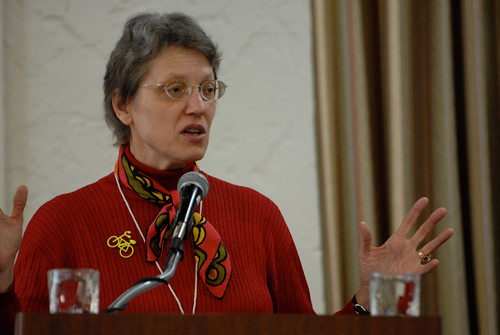 Gail Achterman, known and respected by many for her role in setting Oregon transportation policy, died this afternoon after a bout with pancreatic cancer. She was 62 years old.

Achterman served on the Oregon Transportation Commission from 2000 until August of last year. She resigned her post as chair of the commission on August 25th due to health concerns. She had served as chair since 2007. 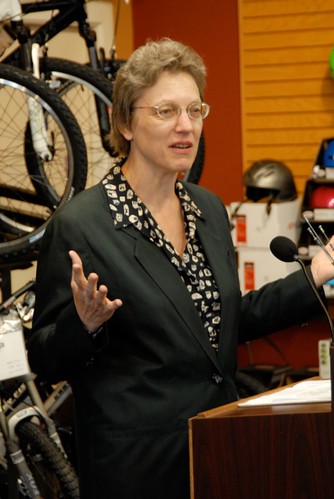 Speaking at the downtown Bike Gallery during the celebration of Portland’s Platinum Bicycle Friendly City award in April 2008.

Achterman’s public service spanned nearly four decades across a variety of issues. Her influence on transportation came not just in the policies she helped craft and the direction she took ODOT; but in the people she worked with and inspired. 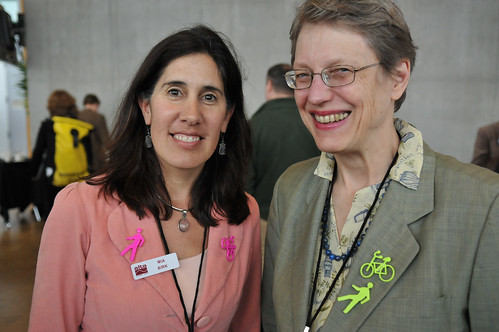 With Mia Birk at the 2011 Oregon Active Transportation Summit.

A.J. Zelada, a member of the Oregon Bicycle and Pedestrian Advisory Committee, emailed me this afternoon as news of Gail’s passing spread. Zelada spoke of Gail’s ability — and willingness — to think big and think creatively about solutions to the transportation problems facing Oregon. Zelada credits Gail’s “pushing the boundaries” as one of the things that led to ODOT’s recent formation of an Active Transportation section within the agency.

Zelada said Gail’s “ability to listen and to question and to think,” has had a big impact:

“That was Gail. Giving respect, loving ideas, making ideas into reality, knowing history and context… ’tis a big hole for our world without her. Listen, create, do, know thyself. A thank you to Gail for passing along these strengths.”

“It is incredibly rare for a chairperson of a state transportation commission would have such a clear vision for mobility. She possessed a rare talent for building consensus, cutting through nonsense, and building solid policy that we will all benefit from. My last experience with Gail was when she received an achievement award from the Willamette Pedestrian Coalition. This was one of the most touching moments in my transportation experience. She was fighting for balanced transportation even as she was fighting her cancer…”

Margi Bradway met Gail when she was a first-year associate at the law firm of Stoel Rives and Gail was a partner in the Natural Resource Section. “She was one of the best, if not the best, environmental attorney in Oregon. Many lawyers give her credit for creating “Environmental Law,” which didn’t exist when she started practicing.”

Margi remembers Gail as a person with a profound intellectual capacity:

“She could take in immense amounts of complex and technical information – not only about transportation, but also about the environment, equity and economics – and then she could figure out how it fits together. This ability, along with the ability to build partnerships and coalitions, was what made her such an effective Chair of the Transportation Commission…

Gail was also persistent. She was passionate about sustainability, biking and walking and the environment. But she knew how to channel those passions in through the administrative and legislative process… Prior to Gail’s Chairmanship, ODOT was a highway agency. At the end of her tenure as the Chair, ODOT was a different agency. One that was more multi-modal and integrated.

My memories of Gail are fewer and further between than I now wish they were. Years ago, when I first started getting serious about this site, people would say, “Have you heard of Gail Achterman? You should know who she is.” So when Gail spoke, I listened.

I liked Gail because she wasn’t afraid of big ideas and she always spoke candidly with me.

Culture at an agency as large as ODOT does not change easily; but Gail was undaunted in moving the agency away from its highway-centric legacy.

I remember, during a hearing in Salem last year when the OTC was trying to decide whether or not to fund TriMet’s Portland-to-Milwaukie Light Rail line with flexible fund dollars, Gail said, “Let me ask a question, and everyone in the room might have heart failure, but what if we took $15 million of the $21 million and just funded it all at once?”

I also remember when she had the guts to bring up bicycle licensing (which is almost as controversial as helmets for some people) at the 2008 Oregon Bike Summit. She said, regardless of what a hard pill it is for some to swallow, it’s “a conversation we might want to have soon.”

At the 2010 Oregon Bike Summit, she didn’t beat around the bush when talking about the sorry state of bicycle funding. After adding up all the money ODOT spends on bicycling from all the various small pots of money, she said:

“We’ve got $11.8 million year going out through various drib-drab programs… But what are we getting out of all that that matters? We don’t know how the money is being leveraged. You’re spending a lot of time pushing paper and not delivering projects; and all this money comes with different conditions…

I don’t know the answer, but I do know that we need to develop a strategic focus and build a statewide, integrated, active transportation plan. If everyone in this room can really start focusing on that, and really think about that, we can get there.”

Gail helped steer the OTC to investing 100% of its federal flexible funds into non-highway projects.

On the issue of declining state gas tax revenues for transportation, she implored bike summit attendees to find another source of funding. “I don’t want to fight a bloody battle over a declining revenue stream,” she said.

[If you’re curious, Gail favored an “odometer based tax with congestion pricing.” “There’s no other choice,” she said, “That’s the revenue source of the future.”]

And, while she said finding a new revenue source would be “One of the toughest political things we’ve ever done in this state,” she added in a fighter’s tone, “It’s absolutely essential for the future you want.”

As an activist, her words inspire me to get out there and push harder. As a reporter, I wish I’d taken more notes during our conversations and I wish I had just one more chance to sit down with her for an interview.

— Learn more about Gail’s decades of public service in The Oregonian and read more about her final months on her CaringBridge site.

Nice lady, did a lot of good. I willl not forget her.

My thoughts and prayers are with the Achterman family and friends as they grieve the loss of their loved one. Her legacy will have a lasting effect on the people of this state.

Gail was a wonderful person and terrific environmental leader. I did not have the opportunity to see her often, but whenever I did she would always greet me like an old friend and talk about some important project she was involved with — typically aimed at improving life in Oregon in some way. The last time I saw her (just after her diagnosis) she was addressing the “Policy Peloton” (a group of state on local leaders out for a bike ride) about the importance of active transportation. She couldn’t ride that day (I suspect that she probably would have despite her illness, but she had yet another speaking engagement later that day), but she also couldn’t pass up the chance to speak to other Oregon leaders about the importance of cycling as a vital element of our transportation system.

Her loss leaves a big void.

My deepest condolences to Gail’s family and close friends. We have all lost a treasure. Gail will long be remembered as one of Oregon’s icons of progressive transportation policy.