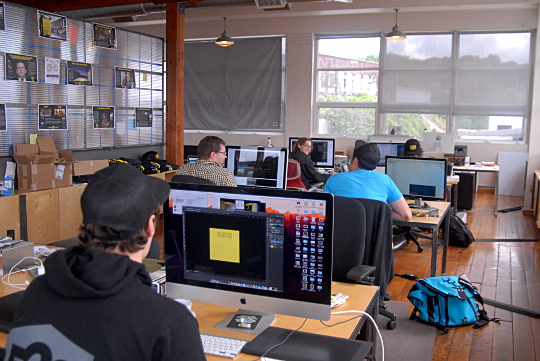 The Project 529 team in the office on Wednesday. Their new free mobile app makes it far easier to track and report a stolen bike, but the company has bigger plans.
(Photos by M.Andersen/BikePortland)

Working from an office high above Interstate Avenue, a team of Portlanders has spent the last year quietly building what might be the country’s most ambitious bike-specific software company.

Funded out of pocket by three co-founders and led by the lead creator of the XBox, the ten-person company calling itself Project 529 hit the Internet last month with a web and mobile app that aspires to be a next-generation Stolen Bicycle Registry and with an attention-grabbing petition asking eBay and Craigslist to begin requiring serial numbers for the bikes they sell.

But the most interesting part of Project 529, which is pronounced “five two nine” in reference to the hours of rest and recreation, is what it wants to do.

J Allard, the company’s ballcap-clad CEO, says the firm might create “the eHarmony of trails,” matching riders to their perfect outdoor adventures. Or it might track maintenance reminders and fitness routines, becoming to “the regular Joes” what Allard says the six-year-old Strava has become for “the pros.” Or it might become a digital toolkit for bike shops that need to upgrade their services to compete with online discounters.

Or all of the above.

“We’re thinking long-term,” Allard said in an interview Wednesday. “I want to be the trusted brand that helps you get more out of your bicycle.”

Wherever the company might be headed, its first product, a free bike registry and stolen bike reporting tool called “529 Garage” with no obvious revenue model, certainly looks great:

“We’re kind of starting backwards, right?” 529 spokesman and co-founder Jason Scott said. “Most companies start on a commercial venture and then they give back.”

Instead, he said Project 529 is starting with a social mission — pitting mobile tech against bike theft — and “seeing where it goes from there.” The company developed its free anti-theft app’s features with input from the Portland Police Bureau and Portland State University security, among other law enforcement agencies.

One of the many nice touches: the moment you list your bike as stolen, the app automatically sends a push notification, with photo, to the phones of 529 Garage users for 10 miles in every direction, warning them to keep an eye out. 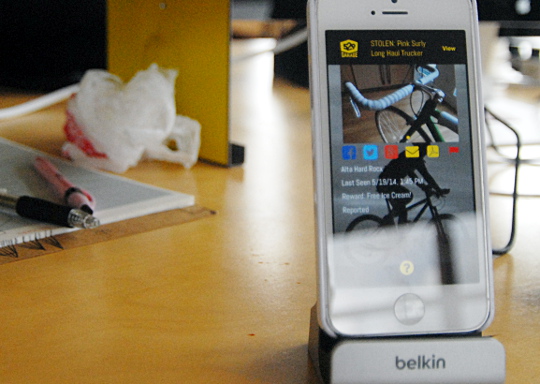 529 Garage users can get a push notification when nearby bikes are stolen.

Another: the program automatically creates a printable PDF of a reward poster for your bike. 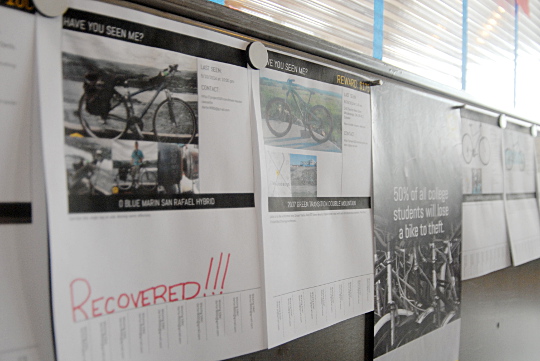 Posters of lost bikes hanging in the 529 headquarters Wednesday. One has been recovered so far.

“We are looking at different ways to monetize what we’re doing. but we probably won’t pull that together until version 2 of the product,” Scott said. “We’ll go out for funding after we launch our initial product. So right now we’re in beta with the Garage, and we will launch the fully functional iPhone version around the second week of June, and I think we’ll have the Android version soon after.”

The pilot area for this initial experimentation is, of course, Portland. This Thursday, 13 local bike shops will offer free Project 529 anti-theft stickers and assistance registering bikes on the new site and app:

Project 529’s founder and CEO is J Allard, whose official bio says he “crashed his first bike at 4” and later led the development of the XBox project for Microsoft, leaving in 2010 after 19 years with the company. His co-founders are Lara Ferroni, another former Microsoftie who moonlights as a cookbook writer and commercial photographer, and Scott, a onetime Intel employee who’s worked in political marketing and several startups. 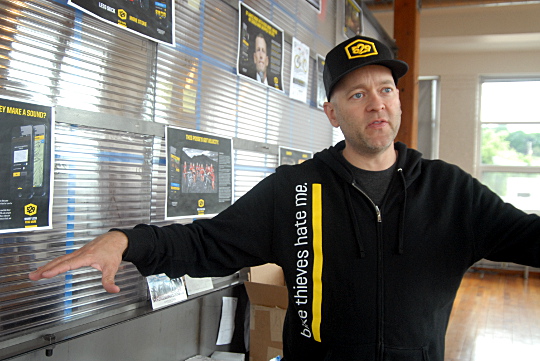 J Allard, Project 529’s CEO, is a former Microsoft executive and bike lover who became fascinated with bike theft after his own bike was stolen in 2012.

Scott said they settled on bike theft as their first problem to solve after a series of meetings with contacts in the bike industry and elsewhere.

“There was a lot of value that technology can bring to the table that wasn’t being leveraged,” he said.

“Bike theft is a $400 million problem,” said Allard, who two years ago tapped his own digital knowhow to track down and reclaim a $7,500 racing bike that had been stolen from him. “Thieves will steal as many bikes as bike shops will touch this year. … We’re going to find a business model.”

Wherever Project 529 goes from here, though, it’s clear that like so many Portland-born projects, this one is driven primarily by its creators’ passion for two things: good people and good bicycling.

“One of the many nice touches: the moment you list your bike as stolen, the app automatically sends a push notification, with photo, to the phones of 529 Garage users for 10 miles in every direction, warning them to keep an eye out.”

No thanks. In Portland that would be scores of notifications a day alone!

Actually, it’s less than 6 per day, according to the statistics for 2012. I would bet that you would love to have a whole community of bike thief haters looking for YOUR bike if it was stolen.
I will be using this app. I despise bike thieves and am willing to have a little extra messaging coming my way if there is a chance I can help someone get their bike back. I had mine stolen, I knew the serial number but there was nothing like this service available.

I wouldn’t sign up for those notifications either, but I’m sure they’ll be opt-outable.

Would be really sweet if we could get those durable weatherproof metalized stickers cheaply to apply on our bike frames in a socially agreed upon place.
A quick little QR Code sticker representing the serial number could be scanned in 529’s app by anyone attempting to buy any bike. If the lables are sold by 529 to defray costs of this service AND the serial number is encrypted properly the sticker itself world be an unforgeable deterrent. If you saw one without it you’d be instantly on guard.

I love it. Great idea.

Great idea! There were 2050 reported thefts in Portland in 2012. If all of those people were users of this app, that would be about 6 notifications per day. I realize that there are many more thefts that aren’t reported, just as not all victims of bike theft will be dialed into this app. I can handle 6 notifications a day as a fair trade-off for possibly recovering a bike I love.

Though i like the idea, not sure why stolen bike info isn’t easily available from the PPD? They actually refer you to this sites registry.

PPD currently takes the time to Google map every traffic stop and every call for service, doesn’t seem like it’d be too hard for them to set up and maintain a public data base.

Sure you don’t get the notifications, but how many times are you going to keep looking for a stolen Trek 800 series, Specialized Rockhopper, or Schwinn Cruiser when those notifications go out? Just too many of some brands/models on the streets for the notifications to be very effective.

Why the bold in this article? None of the others are, but the text, and comments here are in bold.

The snippet on the front page is bold. A tag somewhere is unclosed.

Michael Andersen (News Editor)
I wouldn’t sign up for those notifications either, but I’m sure they’ll be opt-outable.
Recommended 0

Why sign up then? You’re saying you don’t want to be bothered with alerts, but rather just be the beneficiary of community fueled recovery?

Well, sure. 🙂 But actually, I don’t see the push notification to however many good Samaritans might want to participate as the main benefit of registering with this app — I could be wrong but I don’t expect a ton of bikes to be reclaimed that way. It’s more about easily storing records, photos and so on of my bike in the cloud for the time when I’ll need them.

re: petition requiring Craigslist and eBay to require listing bike serial numbers.
Sounds good, but IF I were going try and sell one with that requirement, I’d just lie about the serial # or change a digit or two. How are they going to verify? Maybe they should require a photo of the serial number.

The buyer would have to verify the serial number physically at the time of purchase.
Quite frankly it wouldn’t be difficult to use the same “spelling assistance” technology to suggest that a fudged serial number iff of a CL listing us very close to a know stolen bicycle(s) then provide a list of pictures of said bikes to compare to the CL post.
Also it is quite reasonable to assume that manufacturers use a know format and series of numbers in their serial numbers. Knowing this 529 can provide a generalized lookup that could tell a buyer if the serial number provided by the seller is totally fiction.

I’m really excited by this. Think something akin to an Amber alert for bikes. Having felt violated in the past by having bikes stolen, and being involved in the extremely satisfying act of helping someone get their bike back, I am all about the alerts and having a community looking out for each other. Excited to get bikes registered for free at the Lumberyard today!

I’ll happily have my butt buzzed six times a day with an alert on my phone letting me know a comrade’s bike’s been nipped. Nothing would satisfy me more than personally helping someone get their own bike returned. Rampant theft does more than cost consumers money; it’s created a sort of learned helplessness. My work in a bike shop has shown me time and again how reluctant people are about buying new bikes because “it’s just gonna get stolen”. The fact that people ACCEPT bike theft as inevitable is unacceptable to me. It tells me bike thieves have stolen something MUCH more valuable than bikes… They’ve also robbed people of their outrage and empowerment. By joining the 529 community I’m taking a stand and staying “THIS IS OUTRAGEOUS AND I WON’T STAND FOR IT ANYMORE”. In fact, I’ll sign up for DOUBLE DUTY alerts in my geographic area.