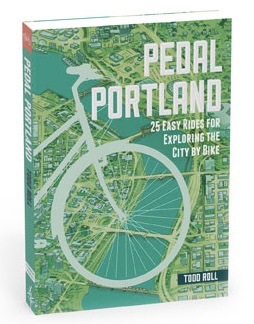 Around this time of year, I’m inviting friends from afar to enjoy the summer we yearn for after a long slog of grey and rain. But with some dry spells and surprising summery days this winter, I was able to get a preview of the rides illustrated in Pedal Portland, the new book from Todd Roll. (If Roll’s name sounds familiar that’s because he also owns and runs Pedal Bike Tours (and he also happens to be the guy who commissioned the now infamous “America’s Bicycle Capital” mural.)

In Pedal Portland, Roll outlines 25 rides that cover the entire region. From familiar bikeways in the central city to regional gems in Gresham, Hillsboro, and Vancouver. Like the guided bike tours offered by Roll’s company, the skill level of the routes ranges from very easy to pretty easy, which is great for my out-of-town friends, and great for reinvigorating the fair-weather riders of our fine city.

Many of the rides roll down familiar paths already identified by the city as greenways, so safety is really no concern. Furthermore, you can hit many of the multi-use paths — some of which I was delighted to find, like Beaverton’s eight-mile Waterhouse Powerline Park and connecting Willow Creek Greenway, on a raised boardwalk along the banks of Willow Creek and its wetland.

Passing through some of the popular streets like Mississippi, Alberta, Dekum, and Hawthorne, I found other reasons to enjoy this guide and improvise them when I lead others. Because the book is careful not to mention specific businesses (that run the risk of closing before press time), I noted bike-friendly and local businesses to visit, like North Portland Bike Works, Woodlawn Café, Breakside Brewing, Stormbreaker Brewing, and Moberi — a bike-powered smoothie cart. 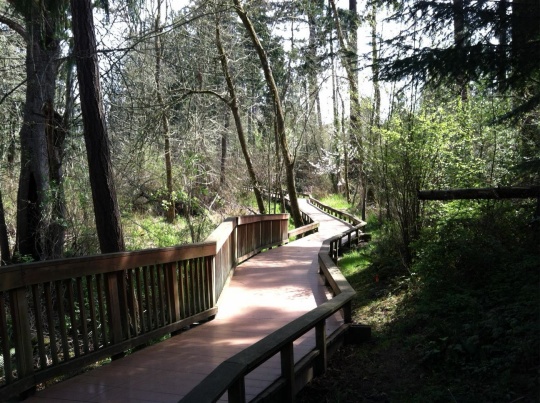 Along the Willow Creek Greenway in Beaverton.
(Photo by Nicholas Von Pless)

For families and beginners, Pedal Portland allows the rider to acclimate and explore with general ease and safety, as each chapter infuses neighborhood trivia, and provides a fun scavenger hunt that one can only solve at 10 miles per hour. The book also offers an entire chapter of how-tos and riding tips to help you pedal like a local. There’s even a brief history lesson that will give you a deeper understanding of how Portland’s bike network came to be.

For those unfamiliar with certain areas (as I was in Beaverton), the cue sheets can be exhaustive and I found myself checking the book against my phone’s GPS, and still was marooned in dead-end business parks. Mr. Roll acknowledged the difficulty, and was pursuing perforated cue sheets or a GPS-assisted smartphone app. Still, the presence of way-finding signs along many of the rides provides added confidence to the journey.

With Pedal Portland, Roll has created more than just a collection of routes. The illustrations, maps, healthy serving of historical insights, and high-quality production value make this something worth adding to your library. And the best part? This book will inspire even more people — both locals and visitors — to enjoy the simple pleasures of a bicycle ride.

Does it have links to printable queue sheets or maps you can load on your phone?

Tom, that’s a great idea! From my interview with Todd, he was totally on board with those kind of supports. I would think that readily available maps would preclude book sales, but perhaps secondary printing could provide exclusive access to printable cues and maps.

Just put a hold on it at the library. Thanks.

My wife and I are moving to Portland from Chicago in a month, so a book like this seems perfect for us.