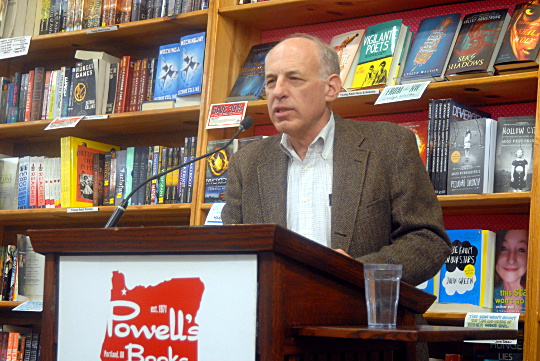 People who speak out against investments in density, biking and public transit may claim to be motivated by things like traffic, parking or crime, Ben Ross said Monday at Powell’s Books.

But though they might not realize it themselves, they aren’t. And that means that addressing their concerns won’t silence their worries.

That’s Ross’s claim, at least. A successful volunteer transit advocate from the inner suburbs of Washington DC, Ross is on tour for his book Dead End: Suburban Sprawl and the Rebirth of American Urbanism, in which he tries to explain the causes of the developed world’s urban revitalization and offer advice for navigating its politics.

“I think what we are really seeing here is a clash of two different value systems,” Ross told a packed room at Powell’s Books on Hawthorne Monday. “Over a century … we’ve built up a system of beliefs based on the idea that living in a single-family house and getting around in an automobile is socially superior to other forms of life.”

This association of suburbanism with wealth shaped the midcentury generations’ perceptions of cities, Ross said. But once the postwar economic boom put the suburban life within reach of most Americans, the children of the middle class stopped associating it with virtue.

“Historically, the idea of the single-family home with the automobile was for the upper-middle class, and it got copied by people further and further down the ladder,” said Ross, who spoke as part of 1000 Friends of Oregon’s McCall Society Speaker Series. “By the 1970s, having your own house with a front yard and moving in an automobile was no longer something that put you above other people. You had a more run-down house and a more run-down car, but you still drove to work.”

People who share the assumptions of the old system, he argues, can be confused or threatened by people who subvert it.

Ross said his research was mostly qualitative, based on other books and his own observations. But he said his one bit of data-driven research was to look at auto use by generation. 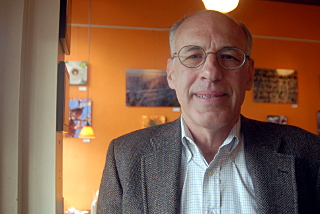 “People who’ve been born since roughly 1970 are driving much less and living in cities more,” Ross said.

Ross’s lesson for advocates follows from his dualistic theory of urban politics: don’t bother negotiating with the hardcore opposition.

“The opposition is not really necessarily motivated by the particular objections it raises,” Ross said. “They have their reasons for their belief, whether or not they state them, and those are valid reasons.”

In a debate shaped by intractable assumptions about what people do or don’t want, logic isn’t much use either.

“Politically, every motivation is legitimate,” Ross said. “There’s no point in telling people they’re wrong if the real reason they’re against something, they’re right about. You just disagree with their value.”

Instead, Ross argues that advocates of urban life “should reach beyond what are often self-appointed neighborhood leaders and try to reach out to the grassroots.”

“Most people are somewhere in the middle; most people have some of each in them,” he said. “When we look out on the street, on Hawthorne Street, you are seeing one of the results of Tom McCall’s vision: this lively walkable street. … What you want to emphasize is that this success needs to be built on, that replacing some of the auto repair shops and parking lots with more of what everybody loves would be good for the community.”

Ross readily admitted that his thinking is shaped by his experience in Maryland. Listening to his insights, I wondered if they might be more useful in explaining suburban opposition to light rail than they are in explaining neighborhood-association opposition to apartment buildings.

But Ross’s explanation for the great decline of driving is interesting, and his case for urbanism — as a political philosophy that’s rooted, essentially, in a love of diversity — is compelling.

“It has to be presented in a way that this is not charity,” he said. “This is something that we’re doing to make something that is better for us. It will make all our communities better.”

“Instead, Ross argues that advocates of urban life “should reach beyond what are often self-appointed neighborhood leaders and try to reach out to the grassroots.”

As for “self-appointed,”well I don’t recall voting on who would be a good livable streets spokesperson.

Hawthorne grew organically, and you’ll never take away the parking in front of the head shop. All develpers do on Hawthorne is suck the
bohemian energy out of the block and replace it with something “weird” like American Apparel. Edgy.

I look forward to a fight for the grassroots- especially when people write “qualitative” books, aka fancy book reports, and are light on data.

Ross can talk past the neighbors- and that went on at the town hall re; street fee I attended. But I watched Novick watching the enraged elders because they vote. He was tuning out the well-worn testimony of the livable streets advocates.

What was that guy’s name over on Cornell Rd.? Oh, yeah, Rob A.

I guess share the world comes to mind so much going thru my head right now, after reading Rob A and we have ppl living with small views.

Ross
“I think what we are really seeing here is a clash of two different value systems,” Ross told a packed room at Powell’s Books on Hawthorne Monday. “Over a century … we’ve built up a system of beliefs based on the idea that living in a single-family house and getting around in an automobile is socially superior to other forms of life.”

A big part of this is the” frontier man spirit” in America. Our nation was built on the notion that anyone “man enough” and who had enough “grit” could make a reasonable success of themselves by going out to the untamed wilderness and taming it. These American Mythical Paragons are held highest of all as people that suceeded with NO HELP AT ALL, certainly not from any government: federal, state, local or otherwise.

Mythical or not these are people to be admired. To truly be self supporting without needing any assistance ever is a rare skill that everyone could use a dose of.
There’s just 2 problems:
() The frontier is gone and every square inch of wilderness is private property.
() Even the loner frontier man benefited from costly government services like the local sheriff, court system, roads, and military protection from aggressors.
The whole planet has become as crowded as Europe was when people where willing risk certain death for a chance to be free of a stifling society.
Now there is nowhere left for those with frontier itch to go… but mad.

“Ross readily admitted that his thinking is shaped by his experience in Maryland. Listening to his insights, I wondered if they might be more useful in explaining suburban opposition to light rail than they are in explaining neighborhood-association opposition to apartment buildings.”

I disagree. The arguments given publicly by the opposition to the apartment buildings weren’t their actual reasons for opposing them. My reason for believing this is that the solutions they clamored for (parking minimums primarily) are not effective at assuaging their supposed concerns (parking congestion, increasing rents). When this was shown to opponents, they either moved on to other concerns or ignored the evidence.

No one has demonstrated that parking minimums and rents are related. This is due to he fact that the Real Estate market is not efficient. Look at the Nobel prize-winning report by Professors Case & Schiller (my source for my contention that parking minimums have no effect on rents- just developer profits). Some markets are efficient- some not so.

So- I did lobby for parking minimums, and I have a belief, right or wrong, that parking minimums are good for neighborhoods like Richmond. It is not an irrational belief and there are arguments on both sides.

Telling the other side that they don’t know what they are talking about is unproductive. Since I dislike the New Urbanism, I recommend that everyone memorize this book. It will make you less effective politically.
Repeat Ross’ mantras.

Can you really believe that building onsite parking doesn’t increase the cost of housing in an urban environment?

Coupling parking with housing forces people to pay for parking spaces that in some cases can be equivalent to 1/4 of their entire apartment square footage. Underground parking, in particular, is extremely expensive. Professor Shoup makes many examples of this in his book and calls out Palo Alto specifically as intentionally using parking minimums to prevent affordable housing from being feasible.

I never said the other side didn’t “know what they were talking about.” I happen to think they knew quite well that what they didn’t want was poor people and renters in the neighborhood and they went looking for politically acceptable issues to rally behind.

I was sorry I missed the event; I accidentally went to the wrong Powell’s. Did somebody make a recording?

I think Ross misses something. Folks in suburbs weren’t threatened by a low income person riding a bike because they could select income segregated neighborhoods that effectively excluded such people. The only time they saw those people was when they blew past them in a car.

I think people in the city opposed to urbanism are *intensely* afraid of sharing a block with someone too poor to own a car, because they’d actually be at risk of encountering them in a situation they couldn’t exit at 60mph. They might actually have to deal with someone in a lower economic class as an equal, as a neighbor.