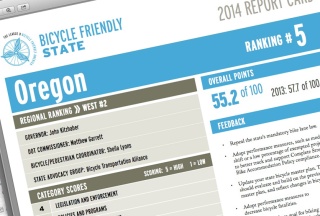 The League of American Bicyclists has ranked Oregon the fifth most bike friendly state in the nation. This ranking marks a slip of two places from our third place ranking last year. Since these rankings debuted in 2008, Oregon has only been out of the top five one time with an eighth-place in 2011 (which the Oregon Department of Transportation took exception to).

While no ranking system is perfect (and most of them are nothing but click-bait garbage) the League of American Bicyclists does have some credibility and they have a rigorous set of criteria that they use to weight a state’s success in integrating bicycling into transportation plans, policies, and projects.

In these latest ranking, our neighbors to the north in Washington have once again nabbed the #1 spot. Rounding out the top five, and placing ahead of Oregon are Minnesota, Wisconsin, and Delaware. Check out the full rankings below: 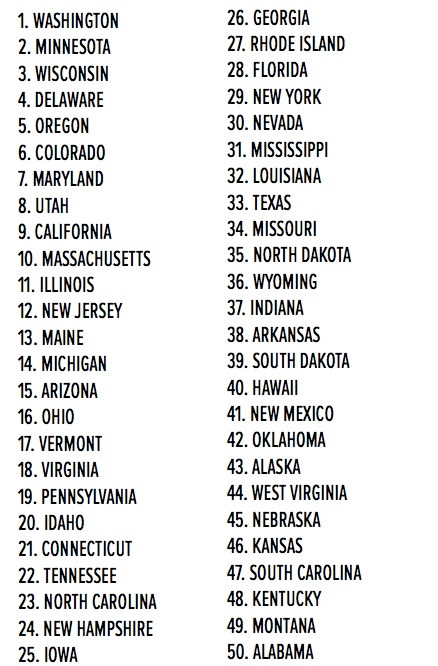 For each state, the League has created a “report card” complete with grades on each of five judging categories, the “top 10 signs of success” and a list of feedback.

With a grading system of 1-5 (5 being best), Oregon failed to get any 5s. We received a 2 on infrastructure and funding. When it comes to specific feedback about how we can improve our ranking, here’s what the League had to say:

• Repeal the state’s mandatory bike lane law.
• Adopt performance measures, such as mode shift or a low percentage of exempted projects, to better track and support Complete Streets/ Bike Accommodation Policy compliance.
• Update your state bicycle master plan. The plan update should evaluate and build on the previous bicycle master plan, and reflect changes in bicycle user needs.
• Adopt performance measures to decrease bicycle fatalities.
• Adopt a mode share goal for biking to encourage the integration of bicycle transportation needs into all transportation and land use policy and project decisions.
• Adopt the National Association of City Transportation Officials (NACTO) Design Guide.
• Adopt a Vision Zero policy to help Oregon reduce crashes, injuries, and fatalities.
• Increase the dedication of funding to bicycle and pedestrian projects from 1% of state transportation trust funds to 2%.
• Adopt a policy requiring state office buildings, state park and recreation facilities, and other state facilities to provide bicycle parking.
• Since arterial and collector roads are the backbone of every transportation network, it is essential to provide adequate bicycle facilities along these roads. Increase the percentage of state highway network that has paved shoulders or bike lanes.

Those are some worthwhile goals and targets for Oregon to work on.

There’s widespread public support to repeal our mandatory sidepath law (a law, ORS 814.420, that states a bicycle rider must use the bike lane if one is present) and we’ve seen recently how that law is open to controversial interpretation. However, we haven’t seen interest from lawmakers or the Bicycle Transportation Alliance to take this legislative change on.

When it comes to statewide planning, the good news is that ODOT has already kicked off an effort to update its Bicycle and Pedestrian Mode Plan. As for adopting the NACTO guide, we reported last month that Oregon’s use of its own bicycle facility design guide might be why we haven’t made that move.

If there’s one glaring thing this ranking system misses is that, in Oregon’s case, our state DOT is doing many forward-thinking things internally that don’t necessarily show up on the League’s radar. Even so, it’s always good to be reminded that we need to push further ahead, faster.

Shame to see Montana on there next to last. If ever there was a beautiful state to bike in…

not sure what city in Delaware is a bicycling mecca…

From what I have read (sorry, forgot where), Wisconsin has received some recognition recently for bike touring on their county roads.
The last time I visited my motherland, Sheboygan, there were sharrows on some streets. I almost fell off my bike.

It’s nice my home state got #1 but it shows how far this country has to go in mainstreaming bikes.

I’m really curious how this pertains to actual rider experience. If the same rider went and compared 4 hours of riding in Seattle to riding in Portland, or Bellingham to Eugene, what would the difference be?

I lived in Seattle from ’03-’05, and while I’ve heard their biking infrastructure has increased since then, I definitely didn’t find it to be anything better than Portland. If anything maybe worse.

Yes…this is a Statewide assessment…so if one stays within the urban bike mecca bubbles then all is always good…kinda like biking only in Davis in the 1980s…the area outside the bubble is not so good and that is the point why they added the state level rankings in 2008.

Administratively adopting the NACTO guide should have been worth a point..too bad ODOT is sitting on the fence for than one…pretty soon it will not gain any extra credit once states like Texas adopts it…

I really like the last bullet: “Increase the percentage of state highway network that has paved shoulders or bike lanes” (assuming those shoulders or lanes are wide enough and well maintained).

I know that in some places the space may just not be there, like along the cliff faces on 99E between Oregon City and Camby, but on most highways it seems both workable and desirable.

Agree with Paul H on “Increase the percentage of state highway network that has paved shoulders or bike lanes.”

To me that’s by far Oregon’s biggest deficit compared to other states I’ve lived in (admittedly those other states came in #1 and #2 in this ranking). My experience is that In most of rural Oregon, most state highways lack any shoulder whatsoever. Not even a gravel shoulder to bail onto if a truck is bearing down on you. Just a ditch or dropoff, inches beyond the fog line.

Compared to Oregon, Washington seems to have a lot more state highways with at least a 3-4′ shoulder. That is still not much if there’s heavy truck traffic – hello US 97! – but other than really busy highways I usually find that to be at least adequate. In my native Minnesota, most state highways have 8-10′ paved shoulders, a relative rarity in Oregon though somewhat more common in WA.

“• Increase the dedication of funding to bicycle and pedestrian projects from 1% of state transportation trust funds to 2%.”

Want to see Oregon score better on this list, and be better for riding a bike? Send a nice note to your elected officials.
https://www.oregonlegislature.gov/FindYourLegislator/leg-districts.html

I live in a rural area on the Olympic Peninsula. If Washington state is number one, the U.S. is in big trouble. I’ve got nada for any kind of bike infrastructure within 3 1/2 miles; and beyond that it’s just a 3′ paved shoulder.

Yeah. Oh man, I biked out from Portland to a wedding near Mt. St. Helen’s, and it was treacherous! The roads were all windy with limited shoulders, cars whizzing by… Oregon can beat that!

Nice to see them taking my homeland of New York to task. Brooklyn and Manhattan probably give the other 99% of the state an artificial bump to #29 (and all the headlines) but I would put money on it being a worse place to bike than most of the states below it on the list.

We’re going to have to work a miracle to decrease those beyond last year’s numbers.

That’s not hyperbole. There were zero last year. To get any fewer we’ll have to start raising cyclists from the dead.

To that extent, I’ll forgive the state for not spending a lot of effort trying to reduce bicyclist fatalities specifically. Let’s work hard to maintain, though.