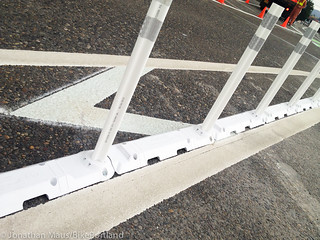 Separation similar to this is coming to
Williams Ave north of Broadway.
(Photo J. Maus/BikePortland)

As the Portland Bureau of Transportation (PBOT) gets closer to breaking ground on their North Williams Avenue Traffic Safety and Operations Project, they’ve released a set of new plans that include some key modifications. Among them is a protected bike lane in one of the busiest and and most important sections of the entire bikeway: just north of Broadway where bicycle riders will merge from right to left as a high volume of traffic enters the I-5 freeway.

And strangely enough, the idea came at the request of the Oregon Department of Transportation.

In an email to members of the project’s Stakeholder Advisory Committee late last week, PBOT project manager Rich Newlands shared the 60% plans and highlighted several changes from the 30% plans released back in January. Back then, we noticed that the plans didn’t call for any physical separation. Instead, PBOT’s plans were to rely on buffer zones on each side of the six-foot bike lane in order to create separation from auto traffic.

Now, thanks to a request by ODOT to prevent “auto encroachment”, PBOT will use a combination of “candlestick wands” and a “16-inch wide traffic separator.”

Newlands said the final design will be per ODOT standards and that it will likely end up looking similar to what Multnomah County installed on SE Hawthorne Blvd back in October. (The Williams version, he added, would have wider spacing of the candlesticks.) According to PBOT’s plans, the separator will be 16-inches wide with the wands will be placed every five feet.

PBOT’s initial designs relied only on green paint, buffers and signage. The addition of physical separation, Newlands confirmed with us today, arose from ODOT concern that people driving northbound on Williams might make a sudden move across the bikeway transition zone. “The separator,” he said, “would prevent that possible conflict.”

Here are the new plan drawings (NE Broadway is at the bottom): 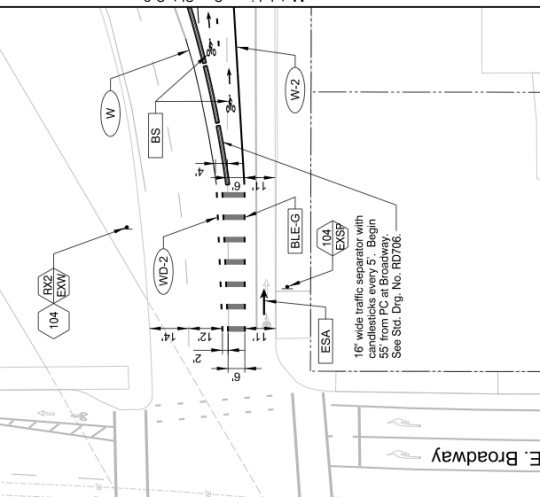 PBOT says they still hope to begin construction on this project later this summer, with plans going out to bid in late May.

— Learn more about this project in our archives.

There are better products designed for this type of multimodal facility…its just too bad “no one” has started making/ importing them widely into this bike friendly region…and also adding them to the standard details.

Though this one comes closer…(I spent 5 seconds to Google it, so there may be more)…

I am glad PBoT is tweaking the spacing from the County example provided…and perhaps 5 feet spacing is still too tight?

And better would be to only use the candles/wands at the beginning and end of conflict zones (driveways and intersections) and to place the delineator in the middle of the buffer zone (vs. tight to the lane stripe).

I like the idea of further physical separation, but that plan view does not make sense to me. What am I missing? Aren’t autos still allowed to travel north on Williams? These flexible bollards look like they go right across the middle of the auto traffic lanes diverting all northbound motor vehicle traffic onto I-5.

Looks like autos that want to travel north on Williams will already be positioned to the right of the bicycle lane. Note the light gray line is the existing position of the lane today, but that the black writing indicates an 11′ auto lane there for the future (to the right of the transition zone).

the problematic hawthorne design was also foisted on cyclists with little input or advanced warning.

why does ODOT get to make this decisions without any public input?

Looks messy. I predict car drivers going up the so-called bike lane. I kind of wish they’d quit fiddling with it.

Chris I
Reply to  Robert Burchett

Albeit unconventional, the design seems clear enough to me. For a driver to make it into the bike lane, it looks like they will have to either be 6ft wide, or knock down a bunch of candlesticks and drive over the divider… so… you’re exactly right, people will probably knock these down almost instantly and start driving in the bike lane.

Here’s a thought, why not just use standard steel-reinforced highway barricades here? That 4′ buffer on the left allows for something wider, and concrete would be much more effective than plastic wands.

Robert Burchett
Reply to  Chris I

Who would have thought a motor vehicle operator would make it halfway across the 205 bridge in the bike lane?

I love how they are actually reducing the bike lane width and creating a physical choke point. As if that area doesn’t have enough congestion as it stands.

If so, I see a very tight pinch point for cyclists and a couple of wide open freeway entrance ramp lanes (which I believe merge down into one lane just a bit south of the top edge of the drawing).

If they insist on using physical separation like this, at least it should be at the outside edge of the buffer zone, and not the inside edge.

And they should have learned already NOT to repeat Multnomah County’s mistakes on the Hawthorne viaduct.

Chris I
Reply to  Buzz Aldrin

We need the pinch point to be less than 9′, or everyone is going to drive right through it. Even at 8-9′, you are going to get a bunch of Car2Go’s all up in there.

Rob Chapman
Reply to  Chris I

This is terrible but the mental image of Car2Gos in the bike lane made me giggle. Who has the Mario Kart stencils for the new bike lane anyway?

I miss those Mario stencils…imagine how fast my ride would be if they went up to the Interstate Bridge!

Off topic, but I noticed that two unrelated businesses along MLK from Tillamook to Knott have Mario graphics on their lit “shingle” signs. Not sure what that’s about, but sure seems to relate via proximity to the N Williams stencils.

No, you’re looking at the northbound I-5 onramp. The southbound onramp isn’t near Williams.

how do you know that? not one of the streets in the image is labeled, nor is the orientation of the figure.

Look at the shape of the curb corners (esp. the bulb-out on the lower left curb) compared to Google maps, and note that the call-out in the drawing states the candlesticks begin “55′ from…Broadway”. Also note that the street on which this work is to take place is Williams Ave.

I’m pretty sure North is up in the diagram because Williams is one-way (North) and the bike stencil has the arrow facing up.

I’m used to reading engineering plans & the image dosen’t have enough information to make any sense. We need a larger image.

I can’t really make any sense of that drawing. Are there 2 lanes or 3? Why is there a crosswalk that runs down the middle of a street?

This appears to be a transition point where bike traffic is moved from the right to the left side of the street. The lanes that veer off to the left are the freeway entrance, while the lane that goes straight up (North) is a shared lane (the transition being marked by the “crosswalk” stripes that run N-S). Once past the transition zone, behind the candlesticks, bikes continue to stay left, apparently into a two-lane bikeway, while motorists continue on staying to the right. The 17′ entrance to this area (11′ for motor vehicles, 6′ for the bike lane) is intended to allow bikes and cars to pass through; motorists driving into this area are not “driving into the bike lane”, they are sharing a shared lane in a R-L transition zone.

I should add that the apparent purpose of the bollards is to prevent last-minute merges from the freeway entrance back across the bike lane onto NB Williams.

We do not need physical separation. Especially these.

We need proper police enforcement that makes people afraid to break the law….
That forces people to pay attention.
Instead however,
we have the Portland Police Dept.

Police enforcement is expensive and sporadic. separators are 24/7 and low cost.

Considering the fact that we are already, and still going to be, paying the police to do their job, and the fact that these bollards are not in place yet and will cost something to put in, I would have to state that the enforcement we are already paying for (but not getting) is the better deal.

Design issues aside, I hope this project stays on schedule, and that the May bids are processed on time. The proposed changes to N Williams are much needed.

Something is needed, otherwise cars will most definitely drive straight over the bike lane. I imagine bollards and plastic curbs are a start; if cars drive over them, then a more damaging barrier can be used.

Cyclists are going to switch from the right side of the road (south of Broadway) to the left side (north of Broadway)? Is that correct? I wonder if there will be bike signal timing, signage, or some other aid for this maneuver.

I wondered the same thing. It looks like it would be absolutely necessary to have a bike signal to avoid 50 bikes trying to merge left across a busy street at the same time. I’m most concerned with the treatment at the intersection of Weidler and Williams. The intersection of bike traffic coming from the Broadway Bridge and the bike traffic coming from the Rose Quarter is very dangerous. If you arrive and the bike lane is full of people waiting for the light, in order to not crowd to the front, bikes currently ride the wrong way against traffic down to the end of the line. Its a blind crossing if there are motor vehicles waiting and you cross in front of them to the bike lane. You can’t see bike traffic coming from the Rose Quarter. This is one of the most dangerous aspects of Williams.

yes, that weird left is horrible… the bike lane is always crowded on Williams… but it’s fun to merge across 4 lanes of traffic to make a real left from the streetcar lane…

the concepts are much clearer on the web site and in the final documents. Currently, north of Broadway, Williams has 3 auto lanes and the center one can go on the freeway or north. After, the center can only go on the freeway. South of Broadway, cyclists are currently on the right side. After, they will have a bike lane left of the northbound through only auto lane. Going through the intersection, cyclists will be on the left side of motorists and the separators and wands reinforce that the center lane can no longer go north on Willams or cross the bike lane.
Final report found here:
http://www.portlandoregon.gov/transportation/53905
page 14.

Are the 60% drawings available online somewhere?

Stuff like this makes me think Mr. Forrester was right. For some related hilarity, go to SW 14th. Av. & Taylor. Approach on foot.

On a somewhat related topic. Does it seem impossible for PBOT to install bollards on the island diverter at NE 15th and Going St. I noticed the latest attempts were reinforced with internal cables. Middle on didn’t last a week. Plenty of people or one determined person feels very compelled to drive over them and rip them out.