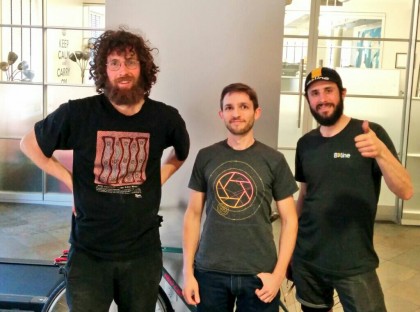 Portland is great at delivering things by bike: flowers, pizza, beer, plumbing. A new company wants to be a platform for delivering … bike repairs.

The two-week-old Sprocket Fly is a mobile bike repair service that plans to affiliate with several different bike technicians who’ll travel to homes and businesses for on-site repairs.

“I’m not a huge aggressive commuter or biker, but I enjoy biking, me and my wife and kid here in Northeast Portland,” Sprocket Fly founder Dan Hahn said. “One of the things that has always been a pain for us is getting it into the shop.”

So Hahn, who’s worked in web development and is also an adjunct professor in Portland State University’s psychology department, decided to put together a business that makes it easy for bike users to bring the shop to them.

Like most local shops, Sprocket Fly offers three levels of tuneup, priced at $69, $119 and $189. Its techs accept jobs voluntarily and receive 40 to 60 percent of the net revenue as independent contractors; Sprocket Fly handles parts, marketing, payments, accounting and other overhead costs.

“We wanted to make sure that our bike techs that we eventually attract and come on board feel as though they’re really well compensated,” Hahn said. “The way our compensation works out, as soon as we ramp up here, our techs are going to be among the most well-compensated in the local community.”

Sprocket Fly also gives a portion of the revenue from each job to downtown antipoverty charity Sisters of the Road.

Hahn said one of Sprocket Fly’s first affiliates is Tim Ennis of Rolling Wrench, whose bike shop on wheels we covered here a few years ago. The team has three other techs so far. Hahn hopes to have seven or eight on call during the peak of bike-repair season, probably with each tech committing to take calls on a certain day of the week.

Much of his marketing, Hahn said, is focused on offering on-site bike repair services to central-city employers who want to offer midday repairs as a benefit to their bike-commuting employees.

Here’s a video Hahn made explaining the service, in the style of the about-us videos of web startups that Hahn said helped inspire his entrepreneurship:

Though Hahn doesn’t expect this to be a full-time job any time soon for anyone, including him, he said he looks forward to homebrewing beer for Sprocket Fly team-building events.

“It’s my goal to build a cohesive unit of techs,” he said. “By no means are we just kind of a tech dispatch service. We’re going to be a close-knit group.”

What a great idea! Good luck!