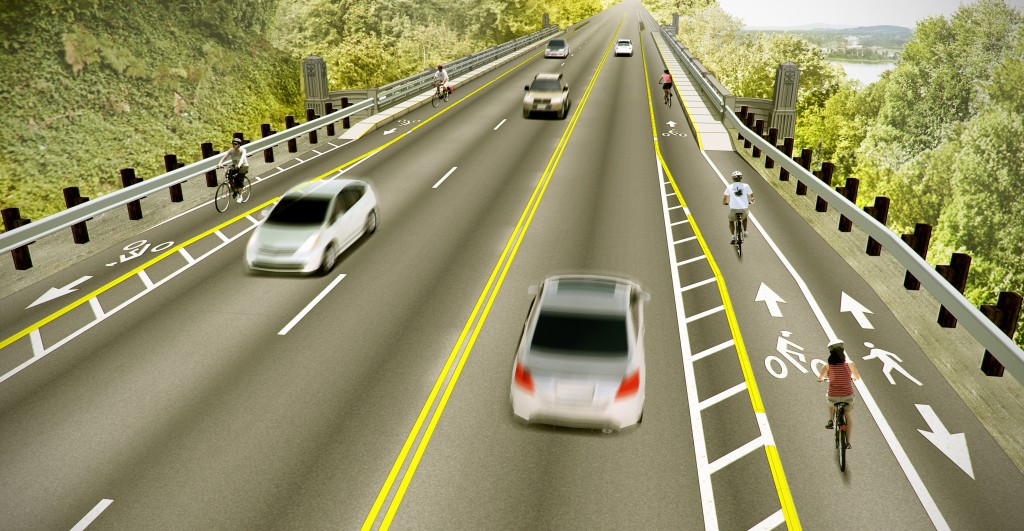 If SW Barbur Blvd were redesigned to improve safety and bicycle access — a.k.a. be put on a “road diet” — how would the changes impact traffic? That question is the key sticking point for any big changes for the road.

When this issue made headlines last fall, Transportation Commissioner Steve Novick promised a traffic study as a way to satisfy the concerns of “Barbur road dieters.” Now, the city is outlining its plan for doing so: it’s going to pay close attention to traffic patterns during road work on Barbur this summer.

The Oregon Department of Transportation will conduct the road work, a series of upgrades to two narrow bridges on Barbur, over four months starting April 21. It’ll require closing one lane in each direction on each bridge for about two months each.

In some ways, this work will be similar to the proposal from street safety advocates: that one northbound lane of Barbur across the bridges be repurposed into two dedicated bike lanes. Such a change would remove the need for bikes to merge into a 45 mph auto lane, as they currently do. Last summer, a Metro traffic analyst said bike lanes in this location wouldn’t significantly reduce the capacity of the road, because the traffic signal south of this stretch, at SW Terwilliger, is the chokepoint.

Chris Warner, chief of staff to Portland Transportation Commissioner Steve Novick, sent BikePortland a statement from the city’s transportation bureau this week that the city “will collaborate with ODOT to evaluate what effects the lane closures have on Barbur Blvd traffic flow.”

“We have a good understanding of how ODOT’s contractor will phase the work and what phases of the construction will most closely simulate the effects of a lane reduction,” the city’s statement said. “We plan to collectively summarize this information and share it with the public. We believe outcome of this process will help inform whether a lane reduction merits further study.”

“One thing I hope is measured is diversion to local streets. That is always difficult to forecast, and some real observations would help inform the debate.”
— Chris Monsere, Portland State University professor

We asked Chris Monsere, a traffic engineering professor at Portland State University and nationally respected expert on road diet tests, whether or not a study during construction would accurately mimic real-world conditions if authorities were to convert a general travel lane to a bike lane along this stretch of Barbur.

Only in some ways, Monsere said.

“The construction lane closures might give a general sense of how making the road safer for all users might affect vehicles’ travel times,” Monsere wrote. “However, it will be challenging to make a direct comparison. Construction lane widths, lane merges, and construction activity are likely to have a significant effect on driver behavior/distractions and would make congestion worse than a final, well-designed roadway. There will probably be some really bad days, so hopefully in addition to congestion, detailed records are kept of construction activity so unusual days can be “thrown out.” Other performance measures, like improved safety for all users, will be next to impossible to test in the construction zone. One thing I hope is measured is diversion to local streets. That is always difficult to forecast, and some real observations would help inform the debate.”

ODOT spokesman Don Hamilton downplayed the chance that any findings from the study this summer will lead to any rapid changes on Barbur, saying the data will “be made available to the SW Corridor project to help them do whatever it is they do concerning Barbur.”

The Southwest Corridor project, a Metro-led effort that’s likely to include a proposed rail or rapid bus line along Barbur, isn’t expected to reach the construction phase for years.

When Commissioner Novick decided last fall that this study would be part of the deal surrounding Portland’s sign-off on the Southwest Corridor planning process, advocates from the Bicycle Transportation Alliance and Oregon Walks praised him for the decision. For now, the question is which sorts of data will be gathered — and what it’ll look like once it has been.

Isn’t portland one of the few cities where there are traffic pattern simulation computer models for the entire city? One of the Jame Jacobs books mentioned that I think. I wonder if those could be used to study patterns in cases like these.

They way ODOT and local jurisdictions build (or rather, don’t build) bike/ped infrastructure is ridiculous: there is an abundance of space for all modes to have their own separated, safe facility, yet ODOT refuses to respond to basic safety deficiencies out of fear that they’ll cause even the slightest inconvenience to their motoring Maharajas.

Rather than an emphasis on measuring inconvenience to motorists, a reasonable study would ask, “if we took away a lane, how much would motorists pay to add another in its place?”

Rather than saying that the bike lane needs to wait 15 years for the SW Corridor process, ODOT should be recognizing that the existing third and fourth auto lanes are extraneous niceties so long as we don’t have basic safety infrastructure for everyone regardless of how they get around.

Therefore ODOT should reconfigure the existing road to the way it *should* have been built in the first place, and then only construct extra automobile lanes if they can find the money for such supplementary appendages at a later date.

was carless
Reply to  Peter W

Absolutely nailed it. Basics above all else.

The Bethany BLVD expansion has got 4 lanes between Highway 26 and West Union, and no bike lanes currently, though the plans call for them. The speed limit on this road is 35.

Giving them the benefit of the doubt (the doubt in my mind being whether they will actually add these bike lanes in when the road is complete) I cannot understand why bike lanes weren’t added to the road during for the temporary setup (temporary meaning the past 6 months). Instead of having one car lane in each direction and a bike lane, it was apparently more important to have redundant car lanes instead.

“…inconvenience to their motoring Maharajas.

Rather than an emphasis on measuring inconvenience to motorists, …” Peter W

This type of tone and attitude you’ve chosen to use in your remarks, used frequently by other people as well, could be a key reason reconfiguration of roads to support biking is not something that is going to be enthusiastically embraced by people that drive.

People that drive are the majority road users. The vast majority of road users. If you’re seeking to lose any opportunity there may be to reconfigure this road by way of a road diet to better support use of bikes for travel on it, you’ve certainly chosen the right approach for dismal failure.

ODOT was founded to serve The People not the automobile.
Someone needs to remind them of this.

but those who voted for a pro-business dino governor also need to be reminded that they voted against a more progressive transportation policy.

Anyone with two eyeballs in their head could watch Barbur for an hour and determine the impact a road diet would have.

I ride Barbur during rush hour every day. There is rarely more than one lanes worth of traffic at peak times. When it full, it’s because people are bypassing I-5. In this case, traffic barely moves at all because it’s backed up all the way into downtown.

was carless
Reply to  gumby

The future Barbur Blvd/SW Portland MAX line would help a lot with that.

This is one of the common misconceptions about high-capacity transit. It generally does not eliminate congestion. It will usually reduce it for some time, but it will also drive growth along the line. Some people will shift to taking transit, and others will shift to driving or change their commuting hours. After a few years, congestion is generally equal to its previous levels. This is one of the reasons why so many of us oppose the CRC.

Transit and bike infrastructure do provide options, though. It comes down to the type of city you want to build. Do you want to force people into cars, or give them options?

It will be interesting to see how they control for the rubbernecking in this “study”.

That’s my biggest concern. It is likely that a one-lane Barbur with construction will be much more congested than a clean, finished configuration. All it takes is one person to go too slowly through the construction zone and it creates a backup. ODOT would then point to the study as a reason to not do the diet.

PorterStout
Reply to  Chris I

On the other hand, knowing that the road is under construction may cause a number of drivers to choose alternate routes on those days, like braving I-5, when they would normally drive Barbur. There are lots of variables that have to be accounted for. Hopefully this study is just one small component of the larger decision process.

“…one person to go too slowly…” Chris I

Constricting the flow of motor vehicle traffic, is a similar outcome that could result from one of the roads’ two main lanes in each direction between reduced in one direction, to just one lane.

If ultimately, a road diet-lane reduction were to be installed on this road to provide through bike lanes across the bridge constriction points, people biking would be left with essentially the same type bike infrastructure that exists on the road currently: bike lanes located directly next to motor vehicles using the road. So, the improvement a road diet could offer bike travel on the road, is modest at best.

Meanwhile, it may be far more helpful to use of the road for travel by bike, if more people riding it were reporting their experience with bridge transitions now aided by the sensor activated flashing bike signs ODOT recently installed. Considering estimates of 800 or so people biking the road daily, the mere two or three people having posted a comment to bikeportland stories about their experience with the new signs, doesn’t help much to determine how effective the signs are, or with further adjustments, how well they could be made to work.

I live in the neighborhood just to the west of the bridges and will have a close up view of the action. I both ride and drive this section of Barbur so I experience the danger faced by a rider and the travel time by auto. Beyond that, I wonder why I still see the elevated walkway on the bridges. There is room for a whole bike lane if the elevation stays flat.

“…I wonder why I still see the elevated walkway on the bridges. …” Steve Brown

I don’t know what the word from ODOT is, but in a few comments to stories about Barbur’s bridge bike crossing situation, people have said the elevated walkways are a structural component of the bridge. In other words, the walkways can’t be brought down to pavement grade without work to the bridge supporting structure itself.

We’re lucky that at least there isn’t any parking on this street. (It ain’t Foster).

It’s high time for a safe and equitable bike lane here. I was seriously injured on my bike and got to go to the ER from it nearby.