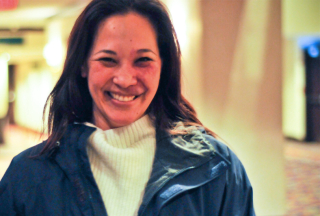 After all the enthusiasm for Women Bike and growing awareness about the importance of including women’s voices on the national advocacy stage, how could the League not include women in the two opening plenaries? If the League really embraced the spirit of Women Bike, why not integrate women leaders, speakers, and activists more fully into the Summit, instead of having a separate Women’s Forum?

Some might see the lack of women at the Summit plenaries as a glaring blind spot and proof that the League has a lot of work to do. Others say the League did have a lot of women leaders at the Summit, they just scheduled all of them for the Women’s Forum. Suffice it to say, this is an ongoing discussion among advocates and among the League itself.

This issue also came up during a recording of the Talking Headways podcast. Joining me on the show were host Tanya Snyder of Streetsblog USA, activist Doug Gordon of Brooklyn Spoke, and bike tour leader Suepinda Keith of Triangle Bikeworks in North Carolina.

“I’m the only person of color in my state delegation. I need to be in those [congressional] offices to speak up for low-income communities and people of color to make sure those voices are heard.”
— Suepinda Keith

“Inclusion was front and center at the Women’s Forum,” she shared, “I saw a lot more diversity and a feeling that ‘we’re in this together.’ As a woman, coming into the Summit [plenary], I was scanning the room for people of color. They need to be here. And if they aren’t, what are we doing to address that?”

But despite those initial feelings, Suepinda found her place at the larger Summit event. She attended every session she could that dealt with equity and women’s issues (she’s especially inspired by what activists are doing in Los Angeles). I could tell that Suepinda enjoyed her time at the Summit and she seemed invigorated by the new people she’d met and the information she could take home.

And today, Suepinda is joining the her fellow North Carolina advocates on Capitol Hill to lobby their members of Congress. She’s a bit nervous about it and she’s never done anything like this before. And, she said, “I’m the only person of color in my state delegation. I need to be in those [congressional] offices to speak up for low-income communities and people of color to make sure those voices are heard.”

And here’s why all this matters: Suepinda would not be lobbying on Capitol Hill today if it weren’t for the Women’s Forum event. It opened doors for her and gave her the building blocks to move past her usually shy and introverted personality (by her own admission) and become a strong voice for bicycling. She has some great stories to tell and I think they’ll resonate loudly on Capitol Hill.

Suepinda’s story is a great sign for the League. While they can continue to tweak how best to make the Summit more reflective of the inclusive and welcoming spirit of the Women’s Forum, they’ve clearly made important strides in the right direction.

I enjoyed this article – thanks for bringing these questions about inclusion and marginalization to the forefront.

This was also discussed in length at the Summit. Scroll through #bikes4all on Twitter for some of the discussion.

“yucky”, really? Based upon what? My impression is that this was based upon her own superficial ascriptions. Is this not what we are trying to reach beyond?

Better that she should pause, observe, look past skin color, age, gender, etc., and judge these speakers and attendees by the merit of their character and contributions. Is this not what we want?

Or maybe we should trust and listen to her experiences and not argue back, you know? She’s a woman of color saying she didn’t feel comfortable. Perhaps we shouldn’t assume she’s in the wrong.

Is it really that superficial to want to see yourself represented at a National Bike Summit, at more than just a forum specifically labeled for/aimed at you?

Judging speakers by the merit of their character is what we want, yes, but we can’t just “look past” skin colour, age, gender etc.. Those are attributes that guide how people are treated throughout their lives. A woman of colour is going to experience life differently than a white man and vise versa. Those varying experiences are what we need to bring to the table, instead of shoving them off the table entirely (by, say for example, booking exclusively male speakers at a national forum) and refusing to acknowledge them in the interest of a version of equality that suits the majority party’s tastes.

Note that she said it *felt* yucky. She’s reporting her reaction to it, not saying that the event was yucky.

It would be interesting to me to hear more about why it felt wrong to her. It sounds like it was partly that she didn’t see people of her background at the Summit. But it could also be that the more traditional approach of bike advocacy didn’t suit her. What’s empowering to some can come off as overly emotional “rah rah” to others.

If all of the women’s issues were herded over to a separate forum, but not discussed in the main event, I suspect it felt yucky in the same way as being 19years old and relegated to the children’s table with your 8 year old cousins at thanksgiving. Or being told to use the segregated drinking fountain. Recall that separate-but-equal isn’t.