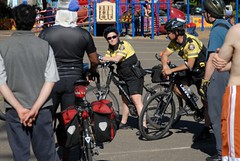 The last few days really kicked the fun up a notch here in Portland.

Pedalpalooza is now in full swing and the events are coming faster than I can keep up with.

Here are some brief reports and photos from two events that happened on Friday: 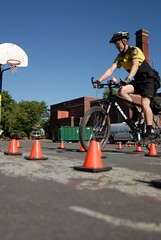 Officer Pickett showing
how it’s done.
Watch him in action below!

Officer Robert Pickett (“PoPo”) gave a presentation that included some fancy bike moves and he explained why bike patrols are such a great tool for community policing.

After his presentation, we were able to test out our own maneuvering skills on a series of coned-off courses Pickett had laid out.

And check out this short video clip of PoPo in action: 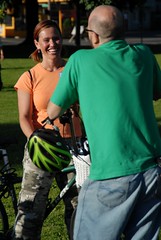 The first singles event in Pedalpalooza history was a great success. Around 40 well-dressed single cyclists showed up to Colonel Summers Park to see if they could make a love connection (or maybe just find a friend).

Mr. CuddleBuddy.com led the event. He had the men (there were a few more guys than gals) form a circle and the ladies were on the outside. After everyone paired up, they chatted for a few minutes and then the ladies would rotate to the next guy.

It was the first bike event in Portland where I smelled perfume and cologne! Not sure if any magic happened but by all the smiles and laughing I think everyone had fun and given the crowd, I bet we’ll see more singles events in the future. A few more photos below:

Check out all the latest photos in the 2008 Pedalpalooza Photo Gallery.

We were having lunch on the patio at the Lloyd Center Nordstrom Saturday, when I heard a bunch of hooting and hollering. I looked up to see 50 or so naked cyclists riding on NE 9th at Multnomah. What a riot! The older couple at the table next to us were quite amused.

Do you think there will be a repeat of the Police on Bikes demo at some point? Because a) it seems like a really fun, positive police-community bike interaction and b) I missed this one but would love to go to a future one. I want more chances to embarrass myself on someone else\’s hotshot obstacle course!

the next Police on Bikes demo will have an added feature, pulling people off bikes at night and then tazering them!

What fun! Did officer pickett demonstrate how they can tackle and tase you at the same time?

My favorite bike cop move is the one they use at protests. They put the bike sideways holding the seat and bar. Then they repeatedly pick up the bike and smash its tires on the ground with a loud grunt, each time taking a step forward. They do this in a line, sort of like a chorus line gone mad.

Why must we continue glorifying these brutes?

You may not like some of the actions taken by some police officers in some highlighted cases where you only know a handful of details (sometimes secondhand) mostly from one side of a situation, but they generally do a good job. We are much better to have them and work with them than to be hostile and form blanket opions about all police and all situations.

I would have liked to have seen the police bike demo. I really like how community events take public vision of the police and turn them into people who are generally doing their best to help the communities that they work and live in.

Ooooh, brake slide. There must be only a few million former BMX kids my age (40s) and younger who can still do that.

What sucks is that for a profession allowed to use deadly force, a few bad apples is all it takes for the public to lose all respect for the police. Until Officer Smith is removed from the force, I will not have anything good to say about or to any mamber of the PPB. End of story. Sorry, PoPo.

Note to self: don\’t surround your spelling corrections with HTML brackets.

This is PPB attempting to interact with the community in a positive way. Improving relations and communication can only help reduce ugly incidents like the other night. (Which by the way are maybe 1% of police interactions.) So either do YOUR part to improve community-police relations, or knock it off already.

I was sick this weekend and missed all the fun. 🙁 I hope PPB will do this again as it sounded really cool.

I like that video. How to make a safe and quick dismount is a great thing to share with the public. For similar reasons I like bike polo and zoobombing. Learning how to successfully negotiate traffic is very important and will make you more comfortable riding.

The PPB definitely needs more positive cycling role models, cause no one wants to live in fear.

I think it’s great that people are coming up with new speed dating themes such as singles on bikes. I wonder what the success rate of the event was. I run speed dating events in Manhattan, and have found that special interest-related themes work very well and that many success stories come from these events.

This reminds me of roller coaster speed dating… everyone seems to be coming up with new speed dating ideas.