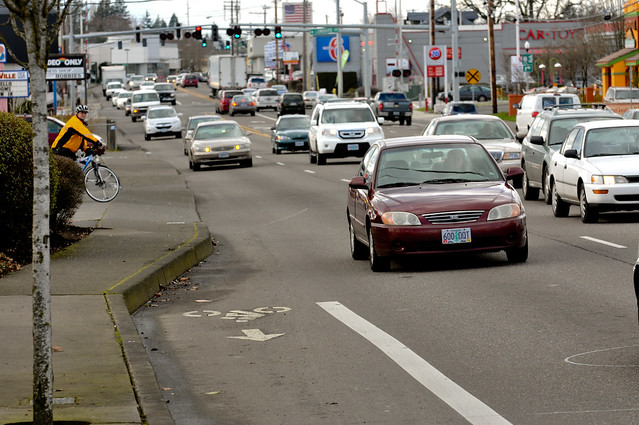 Jim Parsons of Beaverton (upper left), attempts to join traffic at the corner of Southwest Canyon and Lombard in 2011.
(Photos by J.Maus/BikePortland)

A public meeting in Beaverton Thursday will give Washington County residents a chance for in-person feedback on a 20-year transportation plan currently slated to devote vast amounts of money to widening local streets.

Some of the biggest changes would come to east-county streets like 185th Avenue, which would grow from five lanes today to seven corridor lanes. At intersections, it might bulb out to 10 lanes of traffic.

“This is the time to provide comments on these type of changes, not when the project is under design.”
— Shelley Oylear, Washington County Bicycle and Pedestrian Coordinator

The on-street bike network, meanwhile, will keep making progress here and there. At the current rate of about seven miles of bike lane per year, finishing the remaining 431 miles of missing bike routes along arterial and collector streets would take 62 years. Finishing the county’s 140 miles of missing sidewalks, meanwhile, will take 23 years at the current rate of about six miles of sidewalk per year.

In an April 2013 poll commissioned by the county to inform its 2035 Transportation System Plan, 46 percent of residents ranked the biking and walking network as one of the county’s top three priorities, while 35 percent of Washington County residents said new and expanded roads should be a top-three priority.

Percentage of Washington County residents that ranked each activity as one of the county’s top three priorities, 2013.
(Source: DHM Research)

The list of roads to be widened or narrowed over the coming decades is on page 13 of this PDF. Others among the 37 stretches of road that would be widened (in these cases, from two lanes to five) include parts of Parkway Center Drive, Lower Boones Ferry Road and Roy Rogers Road.

Shelley Oylear, Washington County’s bicycle and pedestrian coordinator, said that “this is the time to provide comments on these type of changes, not when the project is under design.”

She also said many residents may not realize that roads marked as having a certain number of lanes may in some cases expand much wider.

Oylear, who BikePortland contacted for a rough estimate of the time it’d take to build out the bike network, added that it’s a complicated calculation. 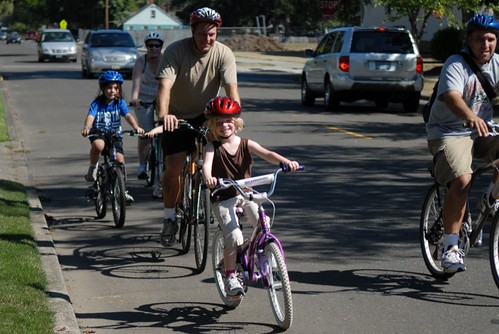 “We are still trying to identify all the bike/ped needs around the county,” she said. “We have info about bike lanes and sidewalks in the urban area, but are still identifying specific projects and cost … not to mention the rural road needs.”

There’s no question that many Washington County residents rely on auto travel, and no one is expecting the county to become the next Portland overnight, or even by 2035. But it’s a little odd that the county’s plan seems to contradict the preferences expressed by its voters in the county’s own polls.

So here’s what makes no sense. Washington County wants to widen all of these roads and make them into near freeways, but they won’t coordinate traffic lights. What good will 5 or 7 and 100 lanes on 185th and any other street do if traffic just rolls from one red light to the next? I will definitely be making comments.

Who controls the traffic lights through Tigard? I wonder if it’s the same people that are pushing for light rail….

They’re already near freeways!
Crazy the contrast between that mentality and the fact that we’re actually NARROWING roads in Portland.

Keep in mind that Washington County is narrowing some roads too! Just not too many.

At the open house Thursday evening, I tried to ask a gentleman with the county, about what prompted certain roads to be narrowed.

Seems as though maybe I was having trouble asking the question I wanted the answer to, which is how much the decision to narrow, may have had to do with residents asking this be done in an effort to relieve traffic issues: cut-throughs, speeding, noise, danger, etc. Guy I talked to gave me a lot of info about process involved in making the decision, but not what prompted the process.

Nowadays, more lanes are not added to shorten an individual trip, they are added for vehicle storage between lights as you note. No individual will be able to go “faster” down a newly-widened street, but more individuals may go slow at the same time, thus increasing “throughput” without making anyone’s trip actually any faster. Although if you compare extremes, such as imagining 185th with one lane each way and then picturing the backup (SB) from the Tanasbourne intersection going all the way back to West Union (single-file), vs. letting that back-up fill into 5 lanes instead of one–the line gets shorter even if it doesn’t move any faster.

Every road project is designed with future traffic projections(always increasing) in mind, what if they designed to decrease the amount of auto traffic?

For example, instead of spending $15 million to expand Walker Rd for cars around Nike, they could use that money to add bicycle lanes along areas of Walker that don’t have them.

Washington County is failing to ask, “How do we decrease driving?” in regards to planning not only roads, but all aspects of county planning as well.

That section of road Jim is on is crazy design.

I agree, BeaverTRON is a daunting place to ride.

Hey WAR come out more West 😉 you will be total shock how drivers I feel treat ppl on 2 wheels. I ride from Wilsonville to Beavertron to PDX. have for 7 years now. we need more bike lanes. section Jim is on ppl can ram you from the back at anytime

The thinking that may be prevalent amongst county officials, is that widening roads for more car carrying capacity can support anticipated and desired economic growth, far more effectively than can sidewalks and bike lanes, making this latter two the lower priority for construction.

A road such as 185th, can be considered as an example of the results of road widening and lane additions on area livability. Between Hwy 26 and TV Hwy, 185th was formerly a two lane, rather heavily used road passing through modest neighborhoods. Despite the roads’ traffic, being next to the road, or traveling the road was generally a quiet, peaceful experience.

Compare that to the 185th of today: sprawling, heavily congested, traveled by motor vehicles at an excessively high mph speed, very noisy. Not attractive or peaceful anymore. Bike lanes make it doable, but not a good road on which to ride a bike, or walk along.

It’s time to do a better job of encouraging and helping people to live closer to their employment, school and so on, so there isn’t quite so much of a need to develop modestly traveled roads, into what 185th has become today. Widening roads and adding lanes to them, has a tendency to do the opposite.

The good thing is that the county’s survey cited “add sidewalks and bike lanes to fill gaps” was ranked as the #3 priority, well ahead of build new roads and add capacity. I hope the commissioners take this seriously. Unfortunately there seem to be a few VERY vocal anti-bike-facility people in the county who try to blame bikes and spending on bike facilities for the county’s transportation problems, and I’m concerned these squeaky wheels will get too much of the grease.

Although westside cycling has increased to the point that drivers, coworkers and store personnel are no longer surprised to see cyclists, we’re still much further out of the mainstream than in the city, and it’s harder to communicate the value of cycling facilities to the average drive-everywhere westsider.

While Beaverton is one of the best biking suburbs I’ve been in, that’s only by suburban standards. Overall connectivity is still substantially worse than in the city, and bike lanes along busy roads still come and go for no apparent reason. Piecemeal construction sometimes adds an isolated bike lane segment (such as next to Lanphere Honda), but the stretches before and after the spot are still dangerous as hell.

Well come on out to Valley Catholic High School tonight and/or submit comments. Later on please vote. There are important Washington County Commission elections coming in the next few months. I personally want to see more and better bike facilities built in this
County within my life time.

I was there this evening, Commissioner Schouten, and the staff listened very attentively. It was a great opportunity to discuss everything from bike lane problems to connectivity and resources for transcontinental bike touring cyclists. Overlay the implications of the Salmonberry Corridor plan and the bike route improvements in the Gorge onto this transportation plan and things get VERY interesting. We could find ourselves in the middle of THE premier transcontinental bike route.

Yes, Washington County staff at the open house were upbeat and listening carefully. Being there early, not many comments had yet been written on the big tablets on easels. On the tablet, one person expressed their feeling that the area needs the Westside Bypass…now… .

There was a map and comment tablet for bike modal plan, pedestrian modal plan, transit modal plan, freight routes. There’s a lot of info I didn’t take in. I’d like to be able to say I saw or heard something suggesting that there was among county staff, a strong sense of importance to be working toward the development of communities where more people work, go to school, and so on, in the community they live in; a development approach that could possibly relieve some of the dependence on excessive arterial motor vehicle travel.

There may be some of that thinking on staff, going on, but I didn’t see or hear it…maybe someone else did. Looking at the maps showing road changes planned, it may be the typical two lane widened to four/five lane approach that’s primarily being taken (Someone else that has a better sense of what’s going one, speak up if you’ve got a better picture on this.).

Road widening in hopes of enabling sufficient increase in road capacity to handle greater numbers of motor vehicles on the road occurring from anticipated population increase, just seems to me like so much wishful thinking. I’ll leave it to someone else to try prove that widening roads can adequately keep up with motor vehicle travel demands made upon them, without substantially diminishing area livability.

The most recent improvements to SW185th resulted in bike lanes to Aloha High School. Do not see how this can be a bad thing. When roads are improved in Washington County, sidewalks and more often than not bike lanes are added.

Yes, bike lanes may be added, but they are added next to 3 – 5 lanes of traffic in one direction. Right-turning drivers lose track of cyclists in that sea of autos, and if you ever have to turn left off of one of these expressway-sized neighborhood streets, good luck. You will be making a “pedestrian” left turn and likely waiting for 5 minutes for both of your “walk” lights to change. Then when they do change, you’re dodging yet more right-turning drivers who have been looking the other way hoping for a right-on-red opportunity (possibly from more than one right-turning lane)…

Adding bike lanes to freeway-sized “streets” is not really that much of an improvement; it is only done to satisfy legal requirements and for bragging about later–it does not really improve things for cyclists when it is accompanied by the creation of 10-lane-wide intersections.

it’ll take me way more than 62 years to move to Washington County, so no worry there.