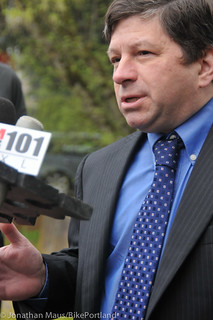 Steve Novick is setting the stage
for the upcoming debate about
transportation spending.
(Photo by J. Maus/BikePortland)

If The Oregonian’s opinion pages are any indication, the City’s campaign to persuade Portlanders to help fund transportation investments is heating up.

On New Year’s Day, the leader of a local walking advocacy group called on Transportation Commissioner Steve Novick and Mayor Charlie Hales to step up for street safety. Then on Saturday (1/11), Novick used The Oregonian’s opinion section to publish his plea for more money to spend on “investments in sidewalks, flashing beacons and other pedestrian amenities.” One day prior to Novick’s article, the Oregonian Editorial Board shared their perspective on what our transportation spending priorities should be

Novick’s article comes as walking advocates pressure the city to step up in light of the 10 people who died while walking in 2013 and while the Portland Bureau of Transportation assembles the pieces of a major campaign to raise new revenue.

Oregon Walks president Aaron Brown also published a guest article in The Oregonian that referred to the deaths as a “public health epidemic.” Brown’s piece opened with, “In Portland, you should be able to walk your dog across the street without fear that you won’t make it to the other side.”

In his piece on Saturday, Novick said he agrees with Brown.

Here’s an excerpt from Novick’s article:

As we reported last month, Novick plans to use every possible opportunity that arises to promote what many people believe will be a new “street fee” to fund transportation infrastructure.

While Novick and Brown are putting sidewalks and safer crossings front and center in the discussion about transportation spending, The Oregonian Editorial Board’s recent foray into the same topic made no mention of them. In their article published on Friday (January 10th), The Oregonian Editorial Board stumped for “unimpeded” auto traffic flow and more, wider roads. Their article painted a picture of frustration for people who drive and deal with congestion on Portland area highways while it dismissed the role of bicycles and mass transit.

The Oregonian editors blamed “a profusion of bicyclists competing for limited space on roadsides” as just one reason why, “People often struggle to get to their destinations on time.” While they gave a nod to bicycles as, “an efficient, healthful mode of transit that needs to find expansion through a deeper integration into greater Portland’s transportation infrastructure,” they said instead of aspiring to be the “next Amsterdam” the “more realistic and productive conversation turns on how to make things better for both cars and bikes…”

The Oregonian’s top thinkers aspire to a future that looks like the fantasy landscape we often see in car commercials. “Unimpeded circulation within the city,” they write in the final line, “and throughout its suburbs, is the region’s lifeblood.”

With a citywide transportation funding package imminent, we expect a lot more opinions to be shared in the coming months. In that time, Portland will have to decide the balance of our priorities. Will it be possible to create (and fund) conditions for “unimpeded circulation with the city” while still making our streets safe to walk and bike on?

Wow that O editorial said so little. What was the point other than to say we have problems with transportation? I took away from it that we should have been driving facilities, biking facilities, and transit.

And I’m not even going to comment on the writing style.

Ah yes, The Oregonian, still holding the torch for Robert Moses. Their sad and wrong-headed history on such things should be noted. They supported the Mt. Hood Freeway and opposed removing Harbor Drive. If they’d won on either of those things, Portland would be worse off for it. Seriously, what HAVE they been right on when it comes to transportation?

They wanted the Mt. Hood Freeway and it would have devastated Portland. There comes a point when an organization is so wrong so often that people should hear them out and do the opposite.

So, I bike, drive, and walk (obviously). Never have I slowed someone down in a non-driving mode (in a way they couldn’t recover the time) nor has anyone walking or cycling slowed me down while driving. Get real.

<The O>
This is a zero sum game: only one transportation mode can survive.
You’re either wit-us or again-us.
</The O>

If there is anyone still subscribing to the Oregonian who reads this, I urge you to cancel, and tell them why. Their views not only do not match the views of most Portlanders, but, if they got their way, would destroy Portland as we know it.

I’d love to see their proposal to ensure unimpeded circulation in the city. Maybe demolish some buildings to make all the downtown streets four lanes wide?

It is truly a fantasy. Any one mode that is made more convenient simply attracts more users, filling up the added ‘space’. Amsterdam demonstrates this as much as Los Angeles or Atlanta.

How many bicycles are on I5 instead of the adjacent bike path on the bridge during rush hour? Isn’t all of that traffic people from WA going to/from PDX in SOVs?

“Unimpeded circulation within the city and throughout its suburbs!”

“Eight lanes of shimmering cement stretching from here to Pasadena! Smooth, safe, fast. Traffic jams will be a thing of the past.”

The O = Judge Doom from Who Framed Roger Rabbit: discuss.

Mostly agree… but…
Back in the days of Joseph Pulitzer, William Randolph Hearst and Yellow Journalism the media saw themselves molding public opinion to what they saw fit.
Now we see once great newspapers serving as propaganda wings of their corporate masters with almost no control over their own content.

Oregonian articles make much more sense if, when you read them, you imagine the voice of one of the Clampetts from the Beverly Hillbillies.

The Oregonian reminds me of an embarrassing relative who is growing tiresome and you’re concerned is no longer mentally competent, so the assisted suicide law could never be invoked.

While you’re at it Oregonian, why don’t you come out and make the case for the repeal of all safety standards for automobiles and the city? They’re taking away your freedom with all this insurance, the DEQ, seat belts, cell phone laws, drunk-driving restrictions, those oppressive speed limits, etc.

Mr. Novick, thanks for your push on this. When I drive I’d have no problem slowing down or being rerouted if it is going to make the environment safer for those walking or not driving automobiles.

This more recent editorial by the board, which I earlier posted reactions to in a comment to the bikeportland story just mentioned, isn’t so good. What the board is suggesting in terms of actual traffic congestion easing infrastructure, is hard to say, because for whatever reason, they don’t say.

The board doesn’t mention widening roads, but does say, as this stories’ writer, Maus points out, ithat:

“…Unimpeded circulation within the city and throughout its suburbs, is the region’s lifeblood.” Oregonian Editorial Board

That’s almost funny if it weren’t such a pathetic display of naivete, dreaming, or…I’m not exactly sure what. At least during rush hour, and increasingly during the much of business hours, it’s been so many years, decades in fact, since circulation within Portland was unimpeded.

I think many people in the Portland Metro area have realized for some time what the Oregonian editorial board may not: the big interconnecting roads such as Hwy 217, Hwy 26, I-405, I-5, probably are not going to get wider than they already are. At least not enough to ever accommodate anticipated area population growth.

The critically important roads I’ve just mentioned are already at capacity with excessive motor vehicle use. Contrary to what the O ed board may think, bikes as transportation may not be ‘the’ solution, as in ‘the only solution’, or ‘the biggest part of the solution’, but bikes and good land use planning to complement the use of bikes as transportation, has huge potential for easing congestion problems caused due to excessive use of motor vehicles for transportation.

Even for Transportation Commissioner Steve Novick, the street fee idea may be a tough sell, even though he’s wisely thought to associate it with such things as the idea that people shouldering the burden of another fee, could help make it safer for them to walk their dogs across the street. Whether they’ll find that believable, I don’t know. Most certainly, they’ll be concerned about chances the money will just disappear down various other rat holes, as was done with part of the money the water bureau had as its resources.

Not necessarily easing congestion, but potential to continue meeting travel needs of increasing numbers of people, in the face of already peak congestion for motor vehicle traffic.