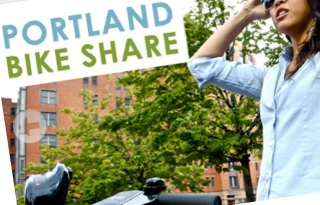 After a year-long hunt for private sponsors that left many doubting whether it was possible, Alta Bicycle Share and the City of Portland have lined up agreements that will bring a publicly funded bicycle sharing system to Portland.

“Bike share private sponsorships are secured and available before the initial system launch in 2014,” the city wrote in a state grant application dated Nov. 21 (PDF).

It’s not yet clear who the sponsor or sponsors might be, or what their terms with the city might be. And no contract has been signed — nor is one certain to be before the formal announcement, which city officials said might be made in a matter of weeks. Reached by phone, Portland Active Transportation Division Manager Dan Bower said he couldn’t expand on the details beyond what was in the grant application.

“The things that were in the grant application, we stand behind,” Bower said.

Like all high-profile sponsorship deals, bike sharing sponsorships are typically kept private until full details can be released, in order to maximize media exposure of an announcement.

Of the anticipated $4.6 million launch cost, $1.8 million came from a federal grant, the rest from private sponsors. After that, Alta says it can pay for operations through a combination of private sponsors and revenue from the system’s users, though expansions are likely to require public funding for the new equipment.

This grant application was made public by Willamette Week last Wednesday; but no one shared this small, important detail about the funding. Earlier today, a BikePortland commenter who goes by “babygorilla” mentioned it in a comment so we contacted PBOT and confirmed the news. 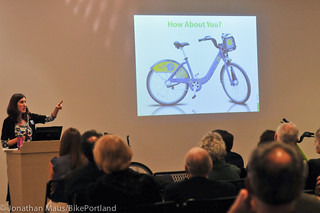 The application said that Phase 1 of Portland’s bike share would have 75 stations and 750 bikes, mostly in the downtown and central east side. That’s the same size as the city has been promising for more than a year, suggesting that the city has secured something close to the full $2.8 million in private sponsorships anticipated for the launch.

Unlike in some other cities, it was operator Alta Bicycle Share’s responsibility to secure a sponsor, rather than the city itself. In its proposal to the city, Alta suggested ambitious sponsorship totals that reflect what the company thinks will be particularly strong bike sharing ridership here in the country’s most bike-friendly major metro area.

In September, we used Alta’s formal proposal to report on many details of the proposed system, including the likely membership cost (about $75 per year, or $5 a day for tourists and other dabblers) and pricing structure (once you have a membership, each individual ride from one station to another would be free within the first 30 minutes).

If approved, the state grant in question would rapidly scale that program up to 1,050 bikes by 2015 and expand the system into Portland’s close-in east-side neighborhoods.

Public bike sharing has been a long time coming in Portland, ever since former Mayor Sam Adams visited Lyon, France in 2007 and set a goal to be the first U.S. city with a modern bicycle sharing system.

That milestone went to Denver in 2010, and dozens of U.S. cities have since followed, including Minneapolis, Washington, New York, San Francisco, Austin, Chicago, Columbus and Chattanooga, Tenn.

Having this funding secured is a major step forward for Portland Bike Share. But at this point, it’s still anyone’s guess who the sponsor (or sponsors) is.

Update 3:05 pm: Willamette Week reports on a Dec. 4 memo in which Alta’s Mia Birk told the city that her company is “continuing to make progress on resolving the outstanding issues of the agreement.” Willamette Week concludes that “no agreements have been reached.” We stand by our reporting.

— Browse our past coverage of Portland Bike Share here.

Well this is good news…Congrats to both the City and to Alta Bikeshare. Alta had a very tough task to pull off…given the responsibility, level of sponsorship needed, and the fact that Portland is not in the top tier advertising revenue, like NY; nor as ad friendly as Chicago, etc. It might have only been tougher in Honolulu fro Alta to pull this deal off.

Jonathan’s still tweaking this story himself but we’ll add this clarification to the text ASAP. Thanks.

We need to get to the bottom of who is funding this, so we can protest them, get the funding pulled, and get back to complaining about how we do not have a bike share system as soon as possible.

I hope it’s an oil company or car dealership for maximum hand-wringing.

One of the best learning moments I had during my first CarFree Cities conference (Berlin 2003) for program planning was this nugget: ‘when rolling out a large bike share project with majority sponsorship funding it was best to look for a wealthy [transportation focused] sponsor who needed their image burnished’…thus Deutsche Bahn AG (“DB”) funded Call-A-Bike.

So until the sponsor is made public…could it be: the ODOT (CRC), Tesoro-Savage (trying to open a refinery in Vancouver WA) or Millennium (owned by Ambre Energy and Arch Coal Inc. and the coal terminal proposal), or etc? Only time will tell.

Great news. It seems like the PBOT is picking up its tempo. Congrats to Commish Novick and Director Treat and anyone else who helped make this happen.

I’m guessing it’ll be Kaiser Permanente. Healthcare is going BIG. Kaiser already does a good bit of advertising locally, much of which encourages healthy lifestyles, some of it featuring bikes.

That would be a much better sponsor…or similar one like the Cover Oregon. Imagine getting health care credits for biking to work actually tied to your milage, feet of elevation gain and safety of your route…all based on big [bike] data!

Their “Thrive” campaign would be much cooler if it included bike share incentives (or ukelele lessons) rather than just reminding us that we need to exercise, use our minds, and have fun so that Kaiser has more money for marketing campaigns. I guess “thriving” might mean our premiums would go down, but Kaiser never makes that commitment.

Anyway, snark aside, I think Kaiser AND Moda would be excellent sponsors. Let’s all move together? Er. The Thriving Yoda?

I am confused. What is going on here?

I think it’s that Aaron and I are reporting on similar facts using different sources, and we’re both talking to a city government that isn’t going to announce anything until it wants to. I’ve got massive respect for Aaron. Our reporting, however, is correct.

The memo from Alta (from December 4) refers to a “prospective” sponsor and states that Alta is confident that they will come to a final agreement in the coming weeks. Most agreements of these types would not be enforceable (meaning that there would be serious consequences from backing out) until a final version executed by both / all parties and that is surely the case here, particularly with the reference to the upcoming meetings with the prospective sponsor’s attorneys and the prospective sponsors desire to realize title sponsorship. Mr. Novick’s comments on December 9 also echo the prospective nature of at least the title sponsor.

The memo and Mr. Novick’s comments are well after the application was submitted / dated November 21st. So, either Alta and Mr. Novick are misinformed, PBOT identified and secured alternative funding not contingent on public sponsorship or PBOT’s application is untrue.

I suspect PBOT indicated a potential grant as a source of funds. They are confident that the sponsorship money will come in even though it is not guaranteed at this point until final agreements are signed. So, they submitted the grant anyway and glossed over / concealed that fact to bolster the chances that the grant will be awarded. Lovely.

Babygorilla- that was quite the story you broke. I read the application,
and the box that was checked (sponsorship secured) appears to have been
a deliberate untruth. The WW article has a link to the application. I suggest people look at the way the sponsorship was presented and decide
whether or not PBOT made a false statement.

It will be interesting to see if the statement re: sponsorship sinks the grant. It may give a sponsor pause. I am frankly surprised that PBOT
stands behind the representation re: sponsorship was secure. It isn’t.
You are supposed to be truthful when asking for money, and PBOT
may have made a big, big mistake.

Thank you Babygorilla for this information. It’s paramount that unethical behavior such as this be made public in order to reveal the true nature of these organizations.

I’ll believe there is a sponsor when I see the name of the sponsor on bikes.

I’m not counting any chickens until there’s a big, fat press release with *details*.

I use NYC Citibikes when I’m in New York for business, every couple of months, and I’d love to see a bike share system here.

The key is density. If the limited number of initial stations are scattered far and wide in the name of equity and inclusion, the system will fail and no-one will benefit. Start out dense and concentrated in the central city, be successful, then expand.

Bikeshare as a plaything for the central city elite and tourists, then.

As long as no city tax dollars are used, fine. Equity means no bike share outside of Nordstroms funded with tax dollars from the neglected neighborhoods.

Keep the reporters stirring, the curious guessing and the cynical posting. The buzz is good launch, and a successful launch is good for Portland. Mia’s marketing crew has a few of these launches under their belts.

If you don’t have a signed contract, you don’t have anything. Deals can and do fall apart at any stage of negotiations. PBS may have a high probability of getting a sponsor very soon, but it isn’t a certainty until pen is put to paper.

People back out of contracts all the time too. If the city says they’ve got a deal worked out in principal. I’ll believe them.

That does happen all the time, but in most cases it’s some time down the road after conditions have changed. The process of signing a contract generally forces the parties to resolve their major differences first. Especially when you’re talking about larger organizations with legal departments that insist that all the i’s be dotted and the t’s crossed. If there’s no signature, then the outside world has no way of knowing whether that process is complete.

I wish it were Paul Allen’s Vulcan, in which case we could have “cruisers”which would help us to “live long and prosper”

There needs to be a bike share category at the Mt. Tabor races. I’d play my part.

Well you’d need to get them back in 30 minutes and with the closest station being at SE20th that would require some SERIOUS sprinting. But yes, these bikes are definitely not that fun to ride uphill, though I found the 3 speed pretty generous on the bikeshare bikes in other cities I have tried.

I heard (from a commenter above) “Kaiser.” So I’m going with Moda. It just sounds right. “Moda Bike” 🙂

Moda got the arena naming right, so it makes sense that another health care concern would step up for the bike share sponsorship. Besides Kaiser, who else.? Maybe Blue Cross?

Fingers crossed for Starbucks and / or Wal-Mart

Maybe a consortium of sponsors? Like a pro bike team? With a theme?

Given the Cover Oregon scandal, I think Oracle should be looking for a good way to give 2% of its $150 million contract back into public relations.