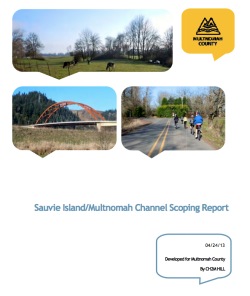 Multnomah County is updating two plans that govern Sauvie Island and not surprisingly, bicycling and road safety have played key roles in the initial conversations. After garnering public feedback last spring, the County has put together a ‘Scoping Report.’ That report (PDF) was a central piece of the agenda at a meeting of the Sauvie Island/Multnomah Channel Community Advisory Committee that met for the first time last week.

This public process will update the Sauvie Island/Multnomah Channel Rural Area Plan and the Multnomah County Transportation System Plan, which will “inform area policies, zoning code updates and transportation improvements for a 20-plus-year planning horizon.” The current plans have not been updated for 16 years.

During the public outreach process to develop the scoping report, Multnomah County heard loud and clear that bicycling and road safety issues need to be addressed. In the section of the report labeled “Transportation Visions”, two items are listed: “Reduce Traffic conflicts between modes,” and “Provide for safe roads/facilities for all users.”

As we’ve reported on for years, Sauvie Island has been seen more than its share of road rage incidents and tense encounters.

The community’s concerns about road use behaviors and existing transportation conditions on Sauvie Island are also evident in the report’s “Transportation issues” section that identifies plan tasks and summarizes community feedback. 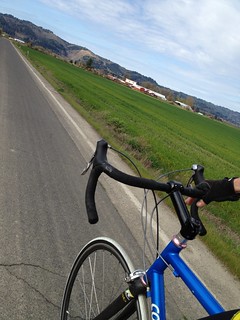 Another section of the report lists a set of recommendations for the update of the Transportation System Plan:

That last item, “develop a demand management strategy,” is interesting. It doesn’t say whether it would include people riding bikes to the island, or just people who drive there.

We’ll be following this process closely and we hope everyone who rides and/or cares about traffic safety on Sauvie Island will pay attention and get involved when the opportunity arises. We’ll post major updates here on the Front Page and on Twitter. For now, you can learn more at the official project website and you can send comments to simcplanning@multco.us.

Looks like they missed the most important item: roads are too narrow for two lanes of traffic plus bikes. 4 foot shoulders on each side would pretty much fix the mode conflicts as far as I’m concerned.

I don’t know, I think free mental health services might be in order for a community that harbors a disproportionate percentage of residents that are willing to attack people on bicycles (blow darts, pepper spray, general road rage) versus their tiny population.

I would rather see money invested to build a MUP between NW Portland and the island before they spend money to widen the roads on the island. People shouldn’t feel like they have to drive somewhere to bike safely.

I have always felt that the 6+feet of shoulder on Highway 30 is adequate from a safety perspective…though definitely lacking in appeal. Sauvie Island, on the other hand, puts bikes and cars on top of each other by design. If a car is passing you and another car is in the oncoming lane at the same time, there just isn’t room.

To me, conditions on Sauvie are pleasant, but fairly dangerous. Conditions on 30 are unpleasant, but fairly safe. My priority would be fixing the dangerous conditions, especially as less-experienced cyclists are more likely to be lulled by the bucolic scenery into biking on Sauvie, while the crowd on 30 tends more towards the strong and confident.

I think I agree with you. Shouldn’t we try and make 30 more pleasant, then? Get more people to actually ride out to the island? I feel like it should be both honestly, but that the island probably needs to be prioritized.
The lane is 6 feet on 30 most of the time, but there are a lot of pinch points and it’s not very well maintained(it’s honestly more of a shoulder than a bike lane). I feel like if ODOT made 30 a more pleasant experience( cleaning, uniformity of lanes, etc), more folks would ride it, and thus out to Sauvie.

It would help tremendously if Oregon laid down shoulders when they grade and pave. Besides reducing user conflict, they could just re-stripe instead of roadwork taking the highways down to one lane for both directions.

Must be that all-powerful flagger lobby.

Are shoulders generally not done here because snow plows don’t need room to shove snow off of the side of the highways?

Florida started paving shoulders years & years ago, but snowplows aren’t much of an issue there.

Something that does not get addressed is the fact that roads deteriorate from the edges in and wide shoulders make roads last longer. Bike lanes instead of shoulders are even better as shoulders don’t get as much maintenance as bike lanes because pavement quality is more critical for bicycles than for an unused (by design) shoulder.

While it does not resolve the (overall seldom) hostile regard toward cyclist, the island is perfect too much of the time to start developing infrastructure to accommodate a handful of businesses, hoards of summer sun worshipers (who would likely flock to an inner-city Willamette beach if it existed), and suburbanites believing “harvesting” involves hopping in the wagon queen family truckster for a trip over the West Hills to enjoy 45 mins of island-time traffic. In order of importance: The island as a sanctuary, the farmers, the other residents, the other businesses, visitor enjoyment, and lastly transportation, which to varying degrees in automobile form negatively effects the vitality of the others. Why are we talking about road rage, when the sight of exhaust fuming traffic backed around the island in both directions ruins all that is good about the island (let’s not blame it on traffic lights). Cars need to be restricted –somehow. Implement a cute trolley to the island, build gravel paths, charge cyclist a toll, but leave the island alone. Adding shoulders or wider lanes won’t make the island anymore perfect. I’ll gladly slide in single file and smile at a few honks if it keeps assfault pavers away.

30 is a good cycling road and has been for 35+ years, but Sauvies? Hicks in the sticks will drive with their dicks.