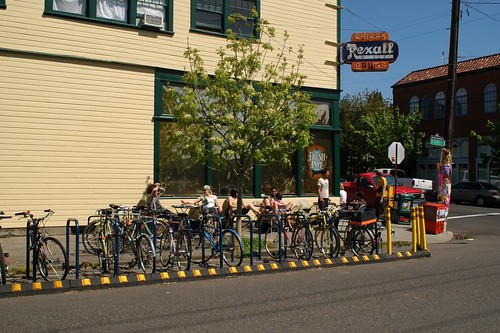 The city installed the first on-street bike corral at Fresh Pot on N Mississippi Ave in 2004. Today there are 100 of them throughout the city.
(Photos © J. Maus/BikePortland)

The Portland Bureau of Transportation (PBOT) has announced the installation of their 100th on-street bike corral. This milestone comes nine years after the first one was installed in north Portland in 2004. The 100th corral is installed at the New Seasons Market on SE Hawthorne Blvd.

To date, the corrals have allowed businesses to swap 163 auto parking spaces for 1,644 bicycle parking spaces. Fewer car spaces has led to more customer access and a healthier environment.

While these days it’s hard to keep up with bike corral installations, the program got off to a slow start back in 2004. The first ever location was on North Shaver at Mississippi in front of Fresh Pot. After that one went in, it took over two years for PBOT to install another one. The delay was caused because PBOT couldn’t settle on a design they were comfortable with replicating all over the city.

However, once the design became finalized, PBOT has struggled to keep up with demand. From 2004 to 2009, PBOT had installed just 20 bike corrals. Now they’ve done 80 in the past four years and there are currently another 98 bike corral applications under review. What accounts for the big backlog? As we reported in 2011, PBOT handles each request on a case-by-case basis and not everyone location gets the OK.

The map below (created by PBOT), shows all 100 of the current locations (you can also view a list of all 100 locations and the businesses responsible for them)…

Here’s more about the corrals from PBOT:

Bike corrals are groupings of six to 12 bike racks installed on-street. While most of Portland’s bicycle parking is provided on sidewalks, in a growing number of commercial areas the high demand for bicycle parking is exceeding sidewalk capacity. In other cases, local businesses simply prefer bicycles in the parking strip rather than autos in order to attract and serve customers as travel patterns shift from auto use.

In addition to increasing customer parking, bike corrals also free up congested sidewalks, and improve visibility at busy intersections for those on foot or behind the wheel.

Today, bike corrals dot many parts of the city (but there are still large swaths of Portland that have zero corrals)… 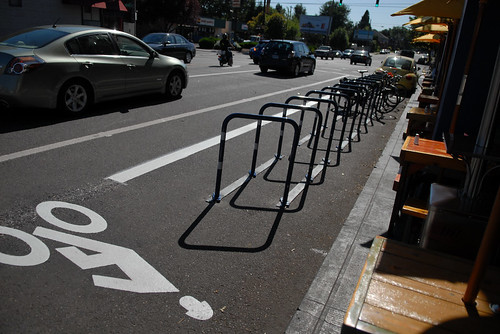 At Pambiche, 28th and Glisan. 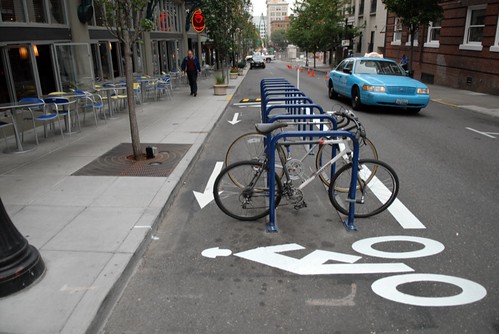 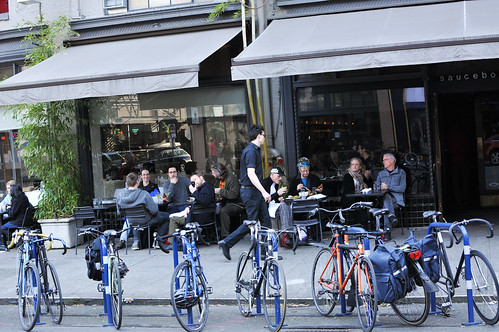 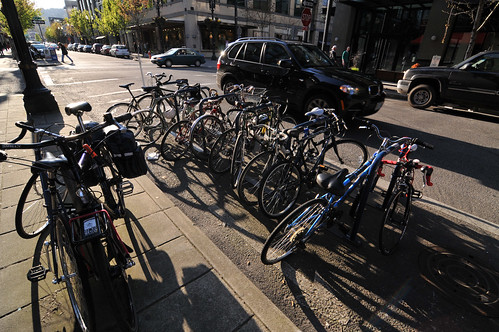 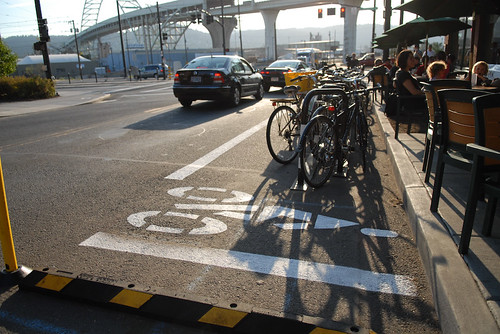 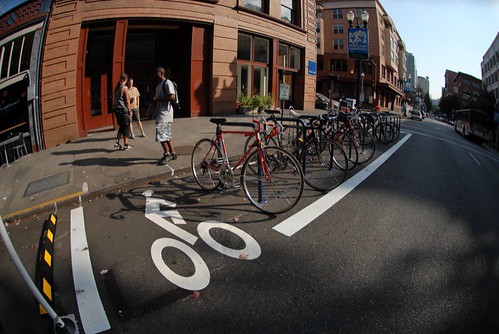 At Stumptown and Bijou Cafe, SW 3rd and Pine. 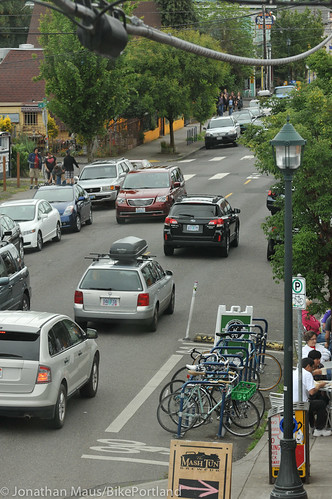 If you’d like to know more about Portland’s bike corrals, browse our archives: We’ve been covering the program since 2006! (Who can forget KATU-TV’s feeble attempt to turn them into a “bikes vs. cars” issue?) You can also get the official word via PBOT’s Bicycle Parking Corrals page. Streetfilms was also in town last week and they shot a short video to mark the 100th corral milestone.

This is awesome, but I think you can see from the map and experience that you can indeed go to a large swath of Portland and not see a corral. East Portland is greatly underrepresented in the bike corral department. I understand that a lot of this is driven by requests from businesses and this demand is greatest in inner Portland, but hope that as facilities improve in East Portland so too does the bike parking options.

That’s true MP. I’ve edited the story and added a few words a bit to reflect that. 100 corrals sounds like a lot, but when you zoom in on the map, there are some large sections of the city that don’t have any.

Jonathan, thanks for that blast from the past…the early photo of the first corral…that tree sure has gotten big since then…and Fresh Pot is one of the few remaining businesses from that early pioneer era now…other than Mississippi Pizza, Rebuilding Center, along with the even older food beer cigarette mart, etc. (I was surprised to see that you took the photo – I figured your photo history would start in 2005.)

100 corrals seems like a lot, but it’s over the course of 10 years. So that’s like 10 corrals a year. Which is basically 1 every 5 months or so. I don’t know. 100 over 10 years just doesn’t seem like a fanfare to me. It seems like in the last couple of years they could added a few more. Especially since bike parking is part of multi-modal road use. Update a road, put in a bio-swale, corral, bike lane, bus lane, etc.

Like all government bureaucracies, change moves at the speed of an iceberg. Thankfully, nobody will know that hyperbole means by 2030.

Curious if cost is a factor, too. Are the racks purchases after an application is approved, or are they already ready to go in a warehouse and just need to be installed?

Well, 100 is certainly better than the meager 10 (+/- since SDOT doesn’t list corral locations) scattered anonymously through the Seattle city area…jealous!

I took my bike on Amtrak to Seattle, and was horrified at the lack of staple racks around the city, let alone corrals. The Paramount Theatre, where I saw a show during my stay, did not have a single bike rack anywhere within half a mile, so it seemed. It boggles the mind!

They could DEFINITELY use another corral outside Powells on Burnside. It is always packed during summer.

Pambiche is a strange one. They got a city-installed bike corral, but then took it down, and re-installed their own bike corral, which is this super-duper fancy cast-iron looking affair. I want to give them total kudos for doing this, because it looks rad, and unique. The only problem is, their new corral is almost impossible to lock to, because the staple racks are way too thick to get a bike lock around. You can’t lock the wheel and frame, only the frame. Anyone else have this issue?

It would be nice if the City could advise businesses that want to create their own custom bike racks on what is needed to be both aesthetically unique **AND** practical.

Oh man. My old roommates are in that Fresh Pot photo. I remember that first little ol’ bike corral going in like it was yesterday…

Seeing the first corral reminds me of how they’ve gotten worse since then. It’s too bad the city decided to have no curbs or other protective barriers between the corrals and the auto travel lanes. I won’t use these. Even with my old bike, it doesn’t seem wise to put your bike right out there next to the traffic lanes with no separation. I also don’t like to be crouching down next to cars to lock the bike. Bring back the protective curbs!

I actually prefer the design without the curbs. Curbs make it hard for people to easily roll into the parking spots. And imagine someone with a heavy/loaded bike trying to lift it over a curb. Perhaps a rounded, mountable curb is a good solution. But in general, I don’t think everything in the street needs to be physically separated. At some point we have to take responsibility as drivers to not ram our cars into everything.

So…. large swaths of the city didn’t go out of business because there wasn’t enough car parking left?

I am curious though if there has been a study showing how businesses have suffered/thrived with bike corrals near by.

It really depends on the location. One corral on SE 52nd outside of Toast Restaurant, is underused. The fact that the restaurant converted its parking lot to outdoor seating and other geographical factors means that Saturday and Sunday around brunch-time there is a bad situation with jay-walking. Eventually there will be a customer hit while jaywalking. On the other hand, some corrals do stay full. The SE 52ns Corral should be removed, IMHO. If they work- they work. If they don’t- they have a negative effect on safety.

If you frequent the Mississippi area then you know that little tree in the picture was grown a lot in the last 9 years since the first bike corral was in stalled. The funny thing is no one ever seems to use it. I’ve locked my bike up to it many of times over the last couple of years and only a couple of bikes use it.

In regards to 100 not being a lot, I think it is. If I’m not mistaken, Jonathan did a story not long ago (a year I think) when he reported on Chicago not having many bike corrals at all. In the story, he mentioned the WHOLE city had 7-8 at the time. That’s nothing especially when some neighborhoods like Alberta and Mississippi have that amount by themselves. I’m grateful for all of them over the city, well inner city that is.

I’ve made good use of the Mississippi corral over the years, but then there’s a couple of staples right on the curb that work better.

I say better, because the added curb is an inconvenience that doesn’t offer much protection. I’ll risk the off chance of some idiot plowing the whole thing down or a bent rim from somebody veering off course. It’s not much different than locking up on the curb and getting backed into, bent frame and all.

And just like the street seats, I keep wondering when these hypothetical dangers will manifest.

I make use of parking corrals when I’m cycling in Portland–and also when I’m driving. When corrals are located on a corner, they prevent a delivery driver from parking their 9 foot tall box van where they can block visibility at an intersection.

Since it doesn’t seem like anyone else has done it yet, I want to give a shout out to Scott Bricker for bringing the idea to Portland and lobbying hard for that first one.

Congrats to PBOT, leading the way. With so many good ideas for bicycle infrastructure, all it takes is one city to have the motivation to test it out, and then many other cities will follow. Davis, CA finally has a couple Bike Corrals, it probably wouldn’t have gotten them had Porltand not led the way.

Remember, if you know of a business that has more than 10 bikes parked outside at one time, you can bring the PBOT “Bike Corral Request Sheet” to them and help them request a bike corral.

The more we ask, the more we’ll get.

Stumbled across this old article and wanted to offer one small correction – 9 years too late! The City of Portland’s first on-street bike corral was installed in the summer of 2001 on the north side of SW Morrison Street at the intersection with 18th (just across from the stadium). It went in in anticipation of the Women’s World Cup (which visited Portland that summer) and was – several years later – removed when the adjacent block was redeveloped (for what is now the Civic condominiums and The Morrison apartments).