‘Fog seal’ treatment has covered up about 100 sharrows; but they’ll return

A “ghost sharrow” near SE 41st and Stark.
(Photo © M.Andersen/BikePortland)

In the last few days, we’ve heard many reports of what reader Jenny Fosmire called “ghost sharrows” like the one in the photo above. It definitely makes it hard for the thermoplastic icons to do their job: indicating to all road users which streets have been designed for relaxed bike travel and hinting proper lane position for bike riders.

City spokesman Dylan Rivera said Thursday that the paving has created “about 100 sharrows that need to be replaced.” Rivera added that crews initially covered some sharrows during the fog seal application in order to keep them from being sprayed over; but they ultimately decided to spray over them, “to give a more finished, uniform appearance and better preserve the road surface.”

Rivera says PBOT has plans in place to replace all the ghost sharrows, “by the end of September, weather permitting.”

The timing might be unfortunate, since September is back-to-school season and an important month in Portland for introducing new people to bike commuting. But of course it’s good that the city is making these repairs to streets that are, after all, saving everyone money by putting more Portlanders on bikes.

By email, in person and on Twitter, readers reported missing sharrows at SE 41st and Stark, NE Going Street, SE 35th and Taylor and NE Klickitat from 57th to 68th. We’re looking forward to their return, and we’re sure that many would-be bike users are, too.

I noticed these covered up on SE 35th at Taylor and wondered why in the world they weren’t masked first. I can’t imagine that wouldn’t have been cheaper. Why, I wonder, didn’t they stick with that approach?

Rivera added that crews initially covered some sharrows during the fog seal application in order to keep them from being sprayed over; but they ultimately decided to spray over them, “to give a more finished, uniform appearance and better preserve the road surface.”

I have my doubts that *two* layers of thermoplastic is going to meet the above criteria.

They are going to have to place the new ones in a different location…..I am wondering if the old ones covered in the new surface and going to be EXTRA slick.

Anyone out there ride over a “ghost sharrow” today in the rain?

“They are going to have to place the new ones in a different location.”

PBOT didn’t get your memo, Terry D. On SE Taylor they have been placed right on top of the old ones, though the new ones use a different ‘stencil/font’.

We were wondering if PBOT actually budgeted for their replacement. Sometimes when the BES or utilities dig up the pavement for work you end up with half or a quarter of a sharrow afterwards that just hangs out afterwards …not getting any repair or respect.

One of the reasons many of the sharrows were installed was that Portland got Federal Stimulus funds to do them a few years back.

Wonder where the money is coming from to replace.

Recent fog sealing in my neighborhood did mask the sharrows beforehand, so maybe they learned their lesson.

I’d love to see a photo. I hope you are correct. But from Michael’s story it seems that they went the other way: started out masking and then gave up on that.

My guess would be that the fog seal liquid is liquid enough to flow beneath any tape they were using to cover the sharrows or (more likely) the petroleum based chemicals in the fog seal dissolves any adhesive used to hold down masking covers.
Either way at some point they realized that it looked like a$$ and they’d have to repaint any ways.

Instead of a solid masking barrier to block the fog seal they might consider taking advantage of the fog seal liquid’s weaknesses. Just like surface preparation a painter must do before paint will adhere to odd surfaces lest it peel of so too there must be some surface contamination that prevents the fog seal from adhering. Use that to mask surface markings.

The crews got it right the first time, cover the old sharrows before fog seal. Aren’t those sharrows, like, $250 each to put down? I saw some on SE Steele, W/92nd, that looked fine with an uncoated box around the old sharrow. They mask off speed bump markings for seal coats.

On my morning commute I saw a road crew prepping the SE Center Street neighborhood greenway for fog sealing by clearing vegetation and scouring cracks. I really appreciate the focus the city is giving to neighborhood greenways now when applying preventative maintenance.

I bet bright new sharrows will really pop and get drivers’ attention once they’re applied on top of the newly-darkened, fog-sealed roadway.

Give your kids some sidewalk chalk and put them to work. That should stick around through the next dry spell and hopefully until they can replace them.

Where “Back to basics” = a step backwards.

And if they had ground down the asphalt and repaved, the sharrows would be where, exactly?

Wait, because they saved (some) money using this cheaper repaving technique they are absolved of any responsibility to avoid having to spend the money saved reinstalling all the sharrow markings? That doesn’t make any sense. The same mindset that authorized the repaving option chosen could easily (and apparently did originally) inspire attention to preserving the sharrows. $250 x 100 is not pocket change.

I wonder if the powers that be assumed that crews would “seal around” the sharrows, as they seemed to have done in some areas, everywhere– thus taking the overall projected cost down a couple hundred thousand bucks. I’ll be pissed if suddenly there’s a lack of funding to restore ’em.

I’m of the opinion that the fog seal was just a quick fix for Hales to boost PR and deliver on his campaign promise, rather than a lasting improvement. Also curious how slick it’ll be in the rain.

I think this is a great opportunity for PBOT to lay down more effective markings. The should seriously consider “green-backed sharrows” like the ones used on the wiggle in San Fran 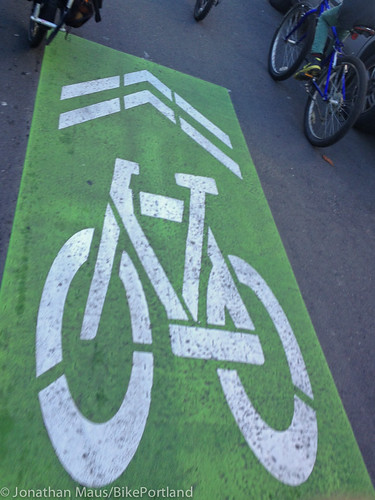 The current sharrow markings were not ever meant to act as wayfinding signs and/or designators of family-friendly bike routes. Adding the green backing would help differentiate them while not requiring a new design (which would trigger MUTCD compliance issues).

Roger G consiiders them wayfinding tools, as do some of the traffic engineers at PBOT, though not all.

If they put them closer to or even in the intersections they could be way finding tools. Many times I have to double back because I don’t see the sharrows in time to turn. Or I loop around in large intersections until I figure out the correct direction.

Don’t you need to know which way the greenway goes before you get to the turn? I heard a rumor the sharrow guidelines are changing.

I agree. We need separate markings for wayfinding.

I like this. Would make navigating unfamiliar sharrows much easier.

Fog sealing, what at waste of money, the benefits only last a year or two then they will need to be back again and we’ll have the same problems. I also noticed fog seal on roads that are way beyond getting any benefit from this type of treatment. Might as well save the money and do something that will last.

I’m curious to read more about this, as this is the first application I have seen here. Do you have some links to support your claims?

One should expect the old thermo sharrows to reappear after a winter or two depending on their lane location…so placing replacement sharrows now should be done with a thought to space them between the old sharrows vs. next to an old sharrow to avoid the “doppelgänger” effect.

Or I wonder if taking a “mop” and wiping down the sprayed sharrow might also help clear much of the coasting…or making a true mask/ inverse stencil of the sharrow out of sheet steel vs. just using a full piece of plywood to cover them (I assume).

I heard the fog seal is very sensitive to water, so a wet mop on the marking after a pass by the machine or crew should do the trick and still seal between the spaces in the marking.

To protect the graphics If specified the contractor could cover each sharro(s) with a removable and reusable mask prior to fog seal treatment.

Yes, as was suggested above.
Even a piece of plywood would go a long way.