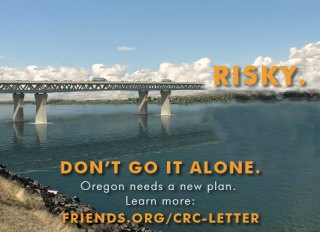 It appears that regional non-profits might be finally awakening for a fight against the Columbia River Crossing project.

This morning, 11 organizations — including 1000 Friends of Oregon, the Sierra Club, and the Bicycle Transportation Alliance — laid out their opposition to the CRC in a strongly-worded letter addressed to Oregon Governor John Kitzhaber. The letter was also sent to legislative leaders and key staffers at the governor’s office.

In the letter, the non-profits made their case against the project and urged Kitzhaber to vote against funding the current CRC plan. After the project was left for dead back in June, it has come roaring back to life in the last month. Now, backers want Oregon to go-it-alone with a plan that puts our state in an even dicier financial position.

“A renewed effort to resurrect the project financed and supported only by Oregon raises the concerns we have long held,” reads the letter, “while adding significant risk to Oregon’s finances, and particularly to Oregon’s ability to meet the many transportation needs around the state.”

“Oregonians do not deserve contorted attempts to revive this dead project.”

The CRC plan is, “a fiscally, environmentally, and socially irresponsible proposal,” they wrote.

Beyond making their opposition clear and public, this tone and action against the CRC by these non-profits is significant because many of them sat on the sidelines when the project went rumbling through the Oregon legislature last session.

As we reported in February, leaders of the largest environmental and transportation non-profits in the state were worried that if they worked to stop the CRC, they would lose political relationships and influence for their agendas in Salem. When the project died, some of these non-profit leaders must have breathed a sigh of relief.

Jason Miner, the executive director of 1000 Friends of Oregon, called his groups lack of organizing against the CRC last time around, “embarrassing.”

Now, Miner and his coalition members are making their opposition quite clear. Here’s what I think is the most powerful paragraph in the letter:

“Please do not support funding for the current CRC plan. The proposed CRC freeway expansion remains bad public policy for Oregon and the Portland-Vancouver region. The proposal is contrary to efforts to foster vibrant, sustainable, and walkable communities that help reduce green-house gas emissions, air and water pollution, farmland loss, and habitat destruction. The current CRC proposal would result in a net loss in efforts to address the public health, safety, and environmental quality impacts of our transportation system. Oregonians do not deserve contorted attempts to revive this dead project.”

With another chance to stand up and fight the project as it takes a final breath in advance of federal funding windows that are soon to close for good, 1000 Friends is one of three organizations we called out in February that have now taken a their anti-CRC stance public. The others are the Oregon Chapter of the Sierra Club and the Bicycle Transportation Alliance. Notably absent from the letter are the Oregon Environmental Council and the Oregon League of Conservation Voters. Those two groups represent nearly 20,000 dues-paying members and wield considerable political clout.

No surprise to see OLCV absent. Kudos to the rest for standing up to this colossal mistake.

OEC and OLCV are wholly owned by powerful, corporate, yellow dog Democrats. The official position among the Dems is to support the boondoggle because they are owned by two interest groups, health corporations and union corporations. OLCV and OEC are ok with minor environmental efforts if they work into their existing special interests, which renders the final outcome usually one step forward and a few steps backwards. Those who have signed on to this letter are a little bit more pro-environment, while still supported by institutional foundations that keep their advocacy limited. This is a minor PR move since they see it’s not going anywhere thanks to Peter Courtney and other defectors, and they want to declare a win to their members. It’s all about image for them, not about actually pushing the envelope and forcing action.

> This is a minor PR move since they see it’s not going anywhere thanks to Peter Courtney and other defectors, and they want to declare a win to their members.

Seth, I can speak only for myself and the work I’ve been doing, but I imagine that accusation is fairly offensive to folks working inside some of the organizations opposing this thing now not because they know it is dead but because they’re concerned it is *not*. If you don’t know you’ve won, you shouldn’t assume you have.

Peter, with all due respect to you and the activists on the ground in many of these organizations also as frustrated as I am at their weak inaction when it really matters in the face of the wanton destruction of nature, the policy decisions of the supposed leadership follows revolving door allegiances to politicians so corrupted by money and yet so unashamed that it needs to be pointed out at every opportunity. This is one such time. I for one refused to be silent on a moving train. They chose silence while then setting up claimed victories due to taking safe positions when they had political cover. It’s the same behavior day in and day out in Salem and it’s time it got called out in public as it deserves to be. How they feel about being called out isn’t my problem, it’s theirs. I don’t need them, but they need the public to believe in their pseudo-legitimacy.

If anybody should fear the absurd whack-a-mole zombie does actually resurrect itself, it is the same organizations that gave it cover in the first place through their silence. The reason it keeps resurrecting is because of unlimited campaign donations and that Salem is filled with politicians and officials (and formers) entirely bought and sold to the highest bidders, depending on narrow and practically useless criteria of acceptability by party. They know the public isn’t behind this one bit, and it’s why they put emergency clauses on the bills to prevent a veto referendum by petitioning — by the time a statewide petition can be filed through non-referendum processes, the bonds will already be issued. When they offer us no recourse to satisfy public opinion directly, you have to wonder why at the end of the day these same “environmental” orgs will be working to re-elect these traitorous turncoats despite their sellout status — is it because on the narrow range of bills that actually hit the floor some of them voted yea and others voted nay down party lines? No, it’s because power is curried and there’s money to be slurped up. Foo is angling to be the next staffer for Bar after Baz takes a teaching position at Tweedle-dee University. The doors are spinning so fast, it’s almost impossible to keep up with the latest arrangements of power and patronage.

Oregon is one of the few states left that overtly permits five and six figure checks from any corporation anywhere to directly buy off our politicians. Why? It’s not because of Republicans, those counties voted in favor of the campaign finance limit measures. It’s because Democrats and their staff work extremely hard to ensure there are no limits on campaign contributions. Five, six, and seven (with no limit) figure checks are perfectly fine in Oregon thanks to Kate Brown and the DOJ that defends her absurd interpretation of laws we passed that make it illegal for them to take such contributions — except they claim it isn’t illegal, so they keep on doing it and refusing to enforce anti-bribery laws we voted for as a public under no illusions that we meant for them to be enforced.

It’s always easy to attack those closest to you, and obviously I’ve done my share if that in regard to some of these groups. Clearly there’s been corporate take-overs of enviro orgs, and yes, we definitely need campaign finance reform. However, this unified statement lets politicians considering the ‘Oregon-takes-all-the-risk’ CRC plan know that these groups may not have their back in the future.

Is it the full court press we were told would happen during the regular session? Hell nope. Yet it’s an (almost) unified voice of condemnation to this utter and complete failure of transportation leadership from Salem. And it’s about dang time.

I appreciate how the letter repeatedly calls the CRC a highway project and a freeway expansion. Not too late to kick this thing in the gut. Our children will think you! And we will too of course, but they’d be the ones paying all the interest on that debt.

This is great news.

A coalition of Portland and statewide groups opposing this is exactly what is needed to provide local Dems cover when raising their concern/opposition with leadership.

Why do they even need cover? Is it because the only way to gain high office and its resulting power in Oregon is to accept unlimited corporate money in the millions of dollars, money that environmentalist average citizens don’t have? These same statewide Democrats refuse to enforce 2006 Measure 47 and actively opposed its enforcement with state lawyers and resources, adopting worse legal positions than even the Supreme Court provided for in Citizens United. Contested legislative elections run in the hundreds of thousands, and approach the million dollar mark frequently, even with only tens of thousands of voters participating. Can you afford to spend a hundred bucks per swing voter in a close election? Somebody can, but it’s not the average citizen. We need campaign finance reform, and we need it now, or we’ll constantly have to battle zombie projects like this intended to curry favor or have special sessions to satisfy corps like Nike or freeway widening unions and corps, and who knows what other corporate wet dream we don’t know what’s cooking?

Awesome! To the environmental groups coming around and/or waking up on this issue: can’t help but notice that you’re just getting on board now that the wind has shifted, but welcome to the party anyway.

Finally! Although Ive been waiting to see how big an erection Kiz thinks he can muster on his own…

This is so needed. I can’t believe OLCV is not signed on.

I’d like to see a statement from the OEC and the OLCV explaining why they feel this ISN’T an environmental issue on which they should take a stand.

This is good news but I won’t rest until we have finally moved on to something better. For example, how about a CRCC Coastal Recreation and Community Corridor?

That would be a non-motorized path from Astoria to Brookings accessible to people of all ages and abilities.

Better late than never! I appreciate the vigilance, this corrupt boondoggle has some impressive momentum

As far as I can tell, the OLCV and OEC are waiting for the State Treasurer to kill the CRC so that they don’t have to offend Big Labor and Big Business. Sorry, but honestly advocating for the big environmental changes we need includes offending Big Labor and Big Business sometimes. OLCV and OEC need to take a stand ASAP or lose a lot of credibility in the environmental community.