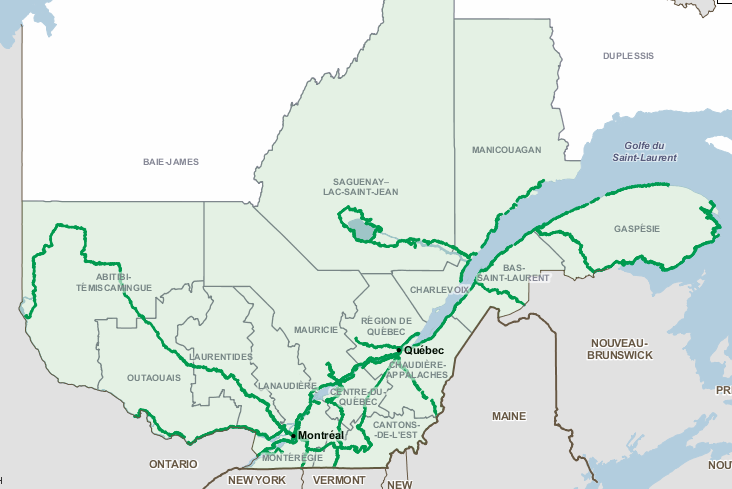 Portland has a network of neighborhood greenways, and they’re great. But Jean-Francois Pronovost’s is 3,100 miles long.

That’s approximately the distance from Portland to Nicaragua.

The Greenway (Route Verte in Pronovost’s native French) is a bike route network running all over the Canadian province of Quebec. On Monday, the vice president for development and public affairs at advocacy group Vélo Québec visits Portland to share lessons from this project and others in the first annual Ann Niles Transportation Lecture, a major new series produced by Portland State University’s Institute for Bicycle and Pedestrian Innovation.

The event is free, though space is limited to 240. I spoke with Pronovost Thursday to learn more about his life’s work, the best parts of Quebec bike touring and how his hometown of Montreal managed to replace 320 auto parking spaces with a downtown protected lane that carries 9,000 bikes per day. (When you read his responses, be sure to imagine them in a dignified French-Canadian accent.)

Can you describe your most famous achievement, the Route Verte?
The Route Verte [pronounced with hard Ts and silent Es] is now 5,000 kilometers all over the province, linking the major city centers. The most interesting thing is that partnership that has built over 18 years, which is still going on. Tons of organizations, hotels, lodging facilities, that sort of thing.

Do you know how much money gets spent in a year by people on the Route Verte?
A few years ago when we measured that with university researchers, we were $134 million ($127 million USD). That doesn’t include bikes and accessories – it’s only travel expenses.

In his campaign last year, Portland Mayor Charlie Hales called for more emphasis on big, inspiring ideas like a bike trail to the Oregon coast. Did Route Verte begin with advocacy from people at the local level, or at the provincial level?
It’s very rare, but it was actually a decision of the prime minister of the province. He decided it was a way to help regional development and to help young people be involved in a big mobilization.

I talk to a lot of people in the US and Europe. Their first priority is not to link to every territory and every country. It takes some perspective to see all the benefits that you could have linking every region, every city, every municipality together. In little rural communities, the bicycle was not the agenda. But with the Route Verte, they were asked to be part of the movement, and that was their first experience to see how to include bicycles in the community.

Let’s shift to talking about cities. Montreal pioneered the use of physically protected urban bike lanes in North America. Lately, there seems to be an almost religious debate within the U.S. bike community over whether these should be widely used. What do you think?
I think it’s less a debate than it was a few years ago. I remember in the 80s we had the first parts of the Montreal bicycle network being built. People were saying, “No, that’s not the way to do it, bicycles have to ride in the street.”

We were really glad to see the administration here build these kind of facilities, because it was one of the reasons why we find so many people on their bicycle in Montreal. It’s not the only reason of course, but it’s been over the years a major incentive to ordinary people. Many cyclists don’t need. But many, many people need.

Is it something that we can implement everywhere? Probably not. It’s not the magical recipe. It’s something you have to adapt in the context you are working in. But the general idea is to create environment where the ordinary people will feel comfortable. And we don’t even talk about “safety,” because safety is a concept that is really different from one person to another. Comfort – it’s a feeling. You feel comfortable. 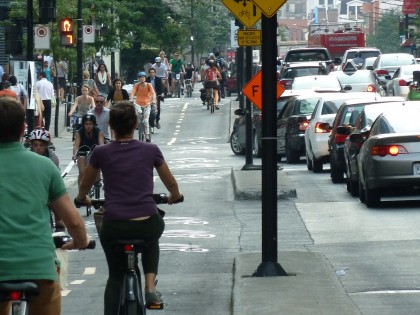 Lots of major bike projects lead to a removal of auto parking or an auto travel lane. What can you say to those who worry that these changes will hurt businesses or cause congestion?
I hate to say it, but merchants are often complaining. They complain for everything – they complain for the weather. I know that it’s tough to do business these days, but when you are in a neighborhood where a lot of people walk and bike, a lot of people who come to your shop will come by walking and biking.

For example, in downtown Montreal in 2008, when the city implemented the bike path on the De Maisonneuve Boulevard — it’s a big arterial street in the business district — they remove 320-something car spaces.

We have evaluated that in a corridor with 200 meters on both sides of the route, there were approximately 11,000 parking spaces. So 300 in 11,000 – you know, it’s almost nothing. The association of merchants was complaining of course at the beginning, and after a while everyone realize that it didn’t change anything.

And now you see that facility in downtown, where you have traffic of almost 10,000 cyclists a day. Everyone is happy. It’s a major improvement for everyone who wants to travel downtown by bicycle.

What’s the best thing about biking in Quebec that someone can’t find in Oregon?
Oh, geez. (laughs) I like biking in Oregon. I’ve been three times at least, mostly on the coast. What is interesting with the Route Verte is the connectivity. I’m able to leave from downtown Montreal with my bike and travel all over the province. We have 500 hotels that are certified “Welcome Cyclists.” So that means you arrive there and they are not scary about you. You arrive and you are welcome. They have special meals for you. So that’s very fun. And the geography’s very different – the St. Laurence River, the old villages, the French culture, the mix of the culture in Montreal – I think it’s fun to try at least once.

If you could go back in time and tell yourself one thing to make you a better bike advocate, what would it be?
We never do enough partnership and building relationship. Because it is the key to be able to influence the decision-makers. It’s a work that is taking so much time to try to bring people all together.

Imagine being able to ride (safely, on a protected or separated route) to Astoria, Mt Hood, Sisters, Bend, the Dalles, Pendleton and out to the Wallowas, and down into the remote stretches of Central and SE Oregon… then on to… Mt Thielsen, Crater Lake, and the Rogue River Valley. Imagine Oregon being *safely accessible* by bike.

Here in Slovania, there’s a big push to connect the country with separated bike lanes. There are plenty of gravel roads that are low to no traffic routes. I haven’t ridden on a highway yet, just bike paths and the gravel roads. If your looking for a bicycle adventure, Slovania offers much more interesting bike travel than the Netherlands could ever offer. And everyone speaks english, in case your wondering. Here’s are former Portlanders website about travel in slovenia http://www.twowheeltravelblog.com/

Sweet. Thanks for the headsup. Definitely going to be there!

My girlfriend and I are going to Quebec at the end of September for a two week bike tour between Montreal and Quebec City. Can’t wait!