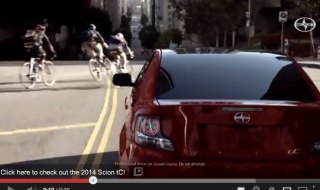 Scion has pulled an ad that referred to people riding bicycles as “obstacles.” The ad, which we highlighted on July 11th, had a fighting theme and the “King of the road” was its tC model sportscar.

Over the weekend, a reader pointed us to a blog post on Scion.com (which seems to be incorrectly dated to July 2nd), where the company addressed the concerns about the ad and announced its removal:

Scion sincerely apologizes to members of the bicycling community that might have been offended by a recent advertisement. It was certainly not our intention to do so as Scion has great respect for bicyclists. Scion is sensitive to your opinion and in response, has made the decision to remove the advertisement.

Your feedback is appreciated as it is through communications such as yours that we become aware of our customers’ expectations and reactions. It also provides us with valuable insight when developing future advertising strategies.

If you have any further questions or comments, call us toll free at 1-866-70-SCION, Monday-Friday 5am-6pm PST and Saturdays 7am-4pm PST.

Thank you for your interest in Scion.

We’re happy to see this ad pulled. There’s enough tension and anger between road users already. The last thing we need is a car company making it seem like some sort of game where the victory goes to the most aggressive and strongest player.

I’m delighted to have contributed to what must have been a deluge of negative feedback, astonished tweets, outraged re-blogs, etc. Scion did the right thing. Pulling the ad is one thing, but I’m also reasonably impressed with the wording of the apology.

Clearly they have great respect for bicyclists. Also for traffic cones and potholes.

I believe the reason for the incorrect post date is because they just swapped out the announcement for a new car model featured in that ad and replaced it with the apology.

This ad has not been pulled. I saw it on local broadcast TV last night.

Super annoyed by this ad, as one of the reasons I love my Scion is because I can fit my bike in the back without having to remove the wheels or use a stupid roof/trunk rack.

I removed the entire back seat of my car to fit my bike without having to remove the wheels. 🙂

Is the ad gone forever from the internet? There should be a record of this somewhere.

Nothing is ever gone forever from the internet!

Ah, the political uses of the subjunctive:
“Scion sincerely apologizes to members of the bicycling community that might have been offended by a recent advertisement.”

I don’t think members of the bicycling community might have been offended; they were offended. Hard to imagine you, Scion, taking this step of pulling the ad if your wording were accurate. And you, Scion mgmt. *might* want to explain how you came to approve the ad in the first place; what the thinking was that suggested it was in good humor, or whatever.

How about this odd ball theory:
Despite the reasonable assumption that the advertisement was written by a domestic ad company it is possible that final approval came from Toyota Corporate HQ overseas.
Anyone not from America might have a hard time understanding or believing the underclass status of anyone that uses a bicycle in America and thus might approve an advert that otherwise looks like normal USA machismo gone wild.

It always amazes me that a huge company like Toyota would want to piss anybody off. Why make enemies? At lest they did the right thing, finally.

JM:
I noted this on the 13th of July in your last article.
When I found the Scion blog I saw comments ranging back a few days before your first article. Of course I didn’t spend hours digging through the blog looking for fraud.

How are you determining that “JULY 2nd” is inaccurate?

I bet their ad company Attik is ANGRY. Hahaha.

Their apology was sincere,over a minor thing, seems like much ado about nothing. Even as a cyclist I have trouble finding anything to be upset about here.

Then you’re clearly not thinking about the consequences of referring to cyclists as ‘obstacles’ – we operate on roads that are already bursting with rage and aggression, and ads like this only intensify that.

And I’d also question the ‘sincerity’ of an apology that does it’s upmost to shine the best light on the company, rather than actually taking full responsibility for their decision.