“This came down in June from the head of pharm after comments on Twitter.”
— official Fred Meyer Twitter feed

Four years after a Portland woman won a social media campaign to get Burgerville to open its outdoor service windows to bike-riding customers, and just a few months after Walgreens also clarified their policy, the power of social media and the rising tide of bike awareness sweeping the nation has struck again.

Oregon retail behemoth Fred Meyer (part of the national Kroger grocery chain) is the latest company to clarify its policies and make sure customers that want to use outdoor service windows while on a bicycle are treated just like customers in cars.

After a reader who said she was refused service brought the issue to our attention, Fred Meyer spokeswoman Melinda Merrill confirmed with us on Tuesday that the store has joined the growing consensus among Oregon retailers that it’s perfectly safe to allow people on bikes to buy things at roll-up pharmacy, fast food and banking windows.

“People are allowed to use their bikes,” Fred Meyer’s Merrill said in a phone interview. “It was just one of those things we’d never faced before, so we didn’t have a policy.”

The corporate decision was made thanks to regular Fred Meyer customer and Wilsonville resident Robin Straughan, who told us her story via email:

On June 14, I rode my bike to the Wilsonville Fred Meyer pharmacy drive-through to pick up a prescription refill. I had done this before without any problem. The pharmacist on staff told me that they don’t serve cyclists or pedestrians at the drive-through. I asked why. He said it was a safety issue. I explained that I had picked up prescriptions here before. He stated that there is a policy prohibiting it, but he would serve me just this once. I asked if I could see the policy and he agreed to find it for me. I got my prescription but then he was unable to find the policy after a quick search and phone call. He told me he’d have it for me later if I wanted to come by another time to pick it up. I agreed and left.

Meanwhile I’d posted about this on Facebook and my husband tweeted about it, tagging you and Fred Meyer. He got a pretty quick response from Fred Meyer: “We’ll check on that and get back to you. Thanks for the question!” I tweeted about it, too, wanting to share more information and to see if I could also get a response.

On June 20, Fred Meyer responded to my tweet letting me know that “it’s OK to take the drive thru w/ your bike“. The same day I also got a phone call from the pharmacist at my Fred Meyer. He said that because he started digging around and people were asking about the policy, the director of Fred Meyer pharmacies took notice. It turns out that they did not have a policy prohibiting bikes. However because the question was raised, the director decided a policy was needed. He made the decision to implement a policy that allows bikes in their drive-throughs.

In the end, I was glad I raised the question and very happy with the resulting decision. 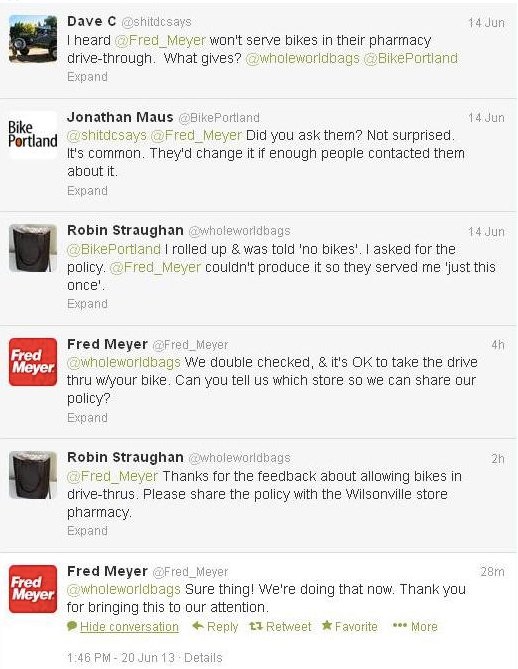 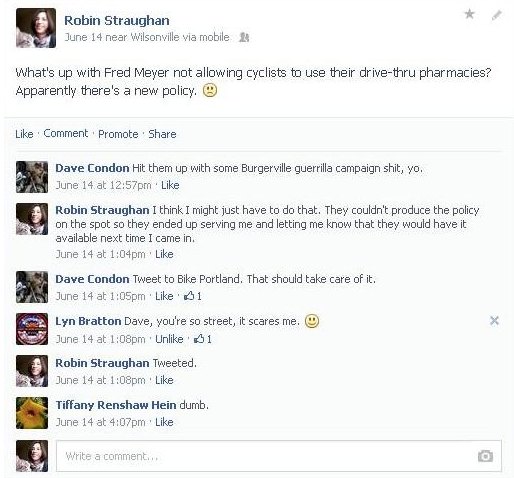 Merrill said in Tuesday’s phone interview that because “the Burgerville issue” failed to result in any injuries at Burgerville outlets, it seemed obvious that the practice is safe and that, therefore, Fred Meyer is in favor of it.

“The biggest concern is that no one gets hurt,” Merrill said.

Always nice to see a company do the right thing for its customers. Now the question is, when will everyone stop calling them “drive-thrus”?

Read an interesting essay about how car culture has co-modified our thinking about “driving” as an activity as opposed to propelling under one’s own impetus…(i.e.-a person actually ‘rides’ a car and ‘drives’ a bike by logical use definition), but the auto vernacular creates it’s own language.

“The biggest concern is that no one gets hurt,”

haha – so that is why we are (were) putting obstacles in the way of those who get around by a mode of transport that statistically hurts no one, and favor the most dangerous of all modes. Right.

I hope they include walking.

Awesome! A few weeks ago I was surprised to be refused service at Wendy’s for the same reason (it was late and nothing was open.) I can’t really see how allowing bikes or peds in the drive-thru could be construed as a liability to the business. If a car hits you in a parking lot would it not be the car’s fault just the same as if they hit you while waiting in the drive-thu que? It is the responsibility of the operator of the car to insure they do not damage people or property. Anyone with a legal/insurance slant care to chime in?

Hey, I just commented about my experience at a Wendy’s below… wonder if your comment was subconsciously on my mind as I rode by craving a burger today? 😉

Nice! Anyone think the same strategy could get Fred Meyer to support something other than the CRC (guess they have to now anyway, right?).

Doesn’t surprise me from a company who’s done so much to sponsor and promote juniors and local bike racing.

Just an anecdote – every once in a while after a hard ride I really crave a burger, and today after some hills I biked through the drive-through at Wendy’s in Sunnyvale, CA (alas, I miss Burgerville). The main problem I had was that the magnetic loop telling them to take my order wouldn’t activate, but after a short wait a car came up behind me and they came over the speaker. I ordered a simple burger and asked for no bag or condiments (as I often do). When I rode up to the window they handed me my burger but the manager and two young girls were clearly dumbfounded, the girls found it a bit humorous, and when I pocketed the burger and rode away I heard the manager say something presumably critical to the girl who took my order and she said “sorry, I was distracted – first bicycle [sic] I’ve ever served!”.

I don’t know that there was a camera here, but I really wonder what else was said/done after I left… specifically, I wonder if there’s suddenly a “no bicycles” policy in place!? I still wonder why riding a bike through a “drive-thru” (or anywhere else for that matter) is really such a big deal.