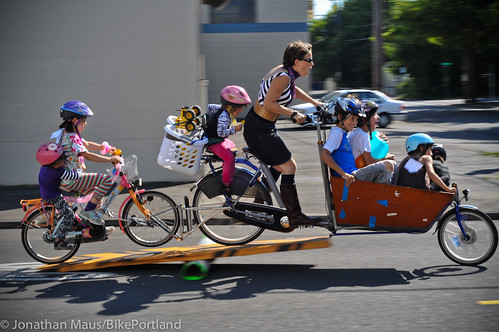 Emily Finch and her family competing in the Fiets of Parenthood in September 2012.
(Photo © J. Maus/BikePortland)

One year ago today we shared the story of Emily Finch, the 35-year old southeast Portland resident and mother of six who “does it all by bike.” Since then, the story has traveled far and wide and Emily became something of a phenomenon.

Since BikePortland started in April 2005, we’ve put 9,322 stories on the Front Page and Emily’s is by far the most popular thing we’ve ever posted (if you’re curious, the four other most popular posts in our all-time top five are coverage of the Naked Bike Ride).

I think there are a lot of reasons why Emily’s story resonated. For one, what she does is simply amazing. I’ve observed people bicycling in the most bike-friendly cities in the world and even in places like Amsterdam and Copenhagen, I’ve yet to see someone carry six kids on a bike with such determination and panache. I also think her story shocked people for different reasons. A lot of the discussion it generated (comments are still coming in a year later!) focused on the juxtaposition of bicycling and Emily’s personal choices about family size. But I think for most people (especially Americans) the idea of riding with kids in traffic — much less six of them — was a shock to their sensibilities. Like I said back then, when you read the story and see the photos, it forces you to re-think what’s possible.

What I’ll remember most about this story is how it provided an avenue for Emily to inspire others and to find her place in our community. From an appearance on the Ricki Lake Show in Los Angeles to an article she wrote in the upcoming issue of Bicycle Times Magazine, she has embraced the attention (well, most of it anyway) and has put it to good use.

Thank you Emily for tolerating the annoyances that come with making your life public. And thanks to everyone who read and shared her story.

— If you missed it the first time around, you can read it here.

Looking forward to seeing larger bike families on the road and in our dense urban environments. The large sustainable family is the new zero-carbon validation approach to a low kid lifestyle.

Sorry, but even living a completely car-free lifestyle will not even come close to offsetting the carbon and environmental impact of having that many children.

Listen,… you hate people havin’ kids, I get it.
You gotta feel superior in some sense,… I get that too.
That is what humans do best, and you seem to be a good example of a human.
This family’s existence bares little burden to the world at this late hour in human history, and you know it.
The die was cast for our demise over a century ago, and people are never gonna turn it around.. why not just keep it to yourself.

Yeah, but just like many of the readers of this blog, I went and shoved a bicycle up my ass and now I feel FANTASTIC!!!! If you have a few minutes I’d love to tell you all the ways I’m really, really awesome.

Hey MadKnowledge, how many people you offsettin’? And do they even thank you? The per capita resource consumption in the Finch household is quite amazingly low, with probably under 200’sq per person, food from scratch prepared in bulk, etc. If you don’t allow “per capita,” then it’s like Rhode Island bagging on Massachusetts for its footprint.

Yes indeed. It is of such little use to assess one facet of a complete jewel. Yes, “if all other things are equal, then…”. I follow that obvious laboratory hypothetical. We actually live in the real world and Emily is a beautiful model for me, the non-breeder. Rhode Island and Massachusetts!!!!

When this story came out last year, I forwarded it on to my sister, who lives in suburban Kansas City. I thought it might inspire her, but she didn’t get it. She lives in a midwest culture, where communities are designed around one form of transit: the automobile. I was there back in May, and was shocked as she (and nearly every other car) traveled down suburban roads at 40-45 mph. These are roads, where there are houses with children playing in the front yard!

We really do live in a different place, and there’s a consciousness about transit here that might be deemed an impossibility in so many suburban communities in this country.

For MadKnowledge up there to make a smug comment about Emily’s family size and carbon output has no freaking clue how the rest of this country lives. I’ve met Emily once on bike, and was charmed and awed how she was getting around with her family. I don’t know how she lives at home, but I have to imagine that it’s a drop in the bucket compared to the amount of resources that a typical 2-child family in the suburban midwest lives. Not to judge my sister, but she has 7… (yes 7!) devices that refrigerate or freeze food items! Her husband has a man cave in the basement that has two flat screens on opposite walls, so one never misses a play in the football game, as one walks over to the kegerator for a Miller Lite. Their house is over 2000-square feet, their spacious backyard is filled with lush, fertilized, and freshly mowed grass. They drive less than a mile to get groceries.

My sister lives this way, because that’s how everyone else lives in her community. She feels that she’s doing nothing wrong with her lifestyle, and in fact, feels that she’s trying to do the right thing in raising her two kids.

I celebrate what Emily is doing. Not only do I hope that other parents see what she’s doing, but hopefully urban planners, insurance executives, automobile manufacturers, and elected officials take note of her transit choice to help rebuild and rethink our communities. Go Emily!

I supose the computer that you wrote this message on was made of bamboo with the batteries recharged from power generated from hamsters running on wheel connected to an alternator.

Bet that none of said computer was produced in China with kids hands, and then shipped overseas put into a big store or wharehouse before you got it.

I bet none of that applies to your phone, or your microwave, or your TV, or any other “thing” you posses. Or that coffee you just drank, or those organic apples (well at least that’s what the sticker on them said) from New Zealand. Or your shoes, or your toothbrush, or…or …or

Unless you’re living in hut somewhere eating only what you grow or kill with your own two hands you haven’t got two legs to stand on when comes to criticizing someone elses choices in life.

With consumerism and industry what it is, perhaps the only thing you as an individual can really do lower your carbon footprint is to opt for a carless lifestyle.

Agree with Emily choice in family size or not she is an amazing example of the human spirit and what can be accomplished on a bicycle.

Besides you’re gunna at some point in your life going to need someone to empty your bed pan and spoon feed you as you retell the tale of how carbonless your life was back in the day at the old folks home, since you wont have any kids to take care of you.

Since you obviously don’t have any kids, you are already adhering to the advice I would give you….

Ferrying around six kids is stunning… But taking seven through the bike skills park is absolutely legendary.

It’s been a wild ride. I am forever indebted to you for the friends I’ve made along the way. Thank you gobs and gobs, Jonathan.

Well Done Emily. You are an inspiration to many. Keep up the good work!

Wow
The large sustainable family is the new zero-carbon validation approach to a low kid lifestyle.

I don’t understand this sentence. Any help?

I love that picture of ya’ll going over the teeter-totter/ramp thing. Nice!

Is she wearing a weight lifting belt in that picture?

Unless you mean that, technically, any belt she wears is a weightlifting belt, no. 🙂

Everyone should find the two-wheeling approach that floats their boat, so to speak, but aren’t at least 3 of those kids fully capable of riding their own bikes?

when you see adult passengers in cars, do you think “huh, can’t they drive their own cars? maybe they lost their licenses…”?

More like when I see 7 clowns get out of a car, I don’t think that practical and convenient transportation was the first thing on their minds. IDK, I love the “look at me!” of tall bikes and freak bikes, but this brand of “look at me” turns me off. I’m willing to accept it as a personal moral failing. 😉

Those kids look super happy, they’re going to have a great and unique perspective on life. Props to this mom for giving her kids what matters. Glad to see, though, that this story sparked so much discussion on the question of family size choices. Personally this whole thing is one of the biggest oxymorons that I’ve heard/seen.

I suppose the discussion was inevitable, but I for one regret the part I played at the time in driving it. It’s not that I feel any less strongly about the issue, but I’ve learned that personalizing it to any particular individual’s choices is not fair or productive.

Besides, any fool who tries to match wits with Emily is in for a drubbing. She can out-snark Tyrion Lannister.

How can both parts of this story not be right?

What Emily does on that bike and with her children is amazing. Having children is a net negative for the environment. Those aren’t mutually exclusive statements.

Happy Anniversary (again — interesting how those are close to each other). Sorry I missed it when the story hit, but I was out riding my bike. Apparently I am now “The Bakfiets Mom with the Covers.”

The world needs more people like Emily. If her kids grow up to be like her (and her physician husband, who also contributes much to the world) then she should have 6 more. Their combination of creativity, persistence, intelligence, and thoughtfulness will help us find solutions to problems in the world to come–not to mention take care of us when we’re old.

Dont worry Emily, I didn’t have any children and I married divorced woman with two children ( children that now effectively have 4 parents). So I will grant you my KCO’s (kid carbon offset). In all seriousness, IMHO we need more children raised in the manner that Emily is raising them, but that’s a whole other discussion.

No regard for the childrens safety is not a reason to get all excited here. She could at least set an example and wear a helmet herself while she is doing circus stunts.

The photo you’re talking about is from the obstacle course at last year’s Fiets of Parenthood. It is a “block party” in the sense that the streets are blocked off to car traffic. She’s setting a great example by showing her kids how to have a good time with other bikey friends.