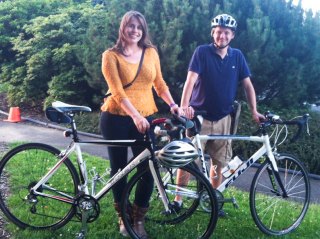 Late Tuesday night someone broke into Audrey and Neil Burkhardt’s garage and stole three of their bikes. Less than 24 hours later, thanks to the bravery and quick thinking of two bike shop employees, they got two of them back.

Audrey shared with us that the thieves smashed through a padlocked door just six feet from where she was sleeping in their home in the Piedmont neighborhood (near Lombard and Vancouver). “The emotional turmoil and the loss of my transportation, stress relief, exercise, etc., was hard,” she shared.

Audrey acted fast. She filed a police report and listed all three bikes on our Stolen Bike Listings. She spent the day dealing with the theft, then later that evening she got an email from Eric Swain, an employee at Revolver Bikes on N Interstate and Rosa Parks Way. They had recovered two of the three bikes.

“I was like, ‘You’re not getting out of here. This isn’t your bike’.”
— Ethan Furniss, Revolver Bikes

According to Ethan Furniss, another Revolver employee who helped get the bikes back, two “shady looking” guys strolled into the shop just before closing on Tuesday night and he immediately suspected the bikes were stolen. The bikes were sleek and new models from Fuji and Trek and Ethan said, “The dudes did not look like the type that would ride bikes made for hill climbing.” Both bikes also had clipless pedals (they wore tennis shoes) and the seats were way out of adjustment. So, even though the shop was full of other customers, he turned all his attention to the thieves. “I just chatted them up. I was kind of grilling them about the bikes, pretending there was nothing wrong.” Meanwhile, Eric jumped onto BikePortland to see if the bikes were indeed stolen.

Hoping to pull the bike closer to himself, Ethan convinced one of the thieves that his seatpost needed adjustment. “Let me help you with that,” he said with a smile, as he pulled toward his body. Just as Ethan made that move, Eric walked up and announced, “Those bikes are on BikePortland!” Ethan then shoved the bike he already had in his hands further toward the back of the store. Ethan says the other thief exclaimed, “No way! These aren’t stolen! I’m out of here!” and grabbed his backpack and the bike and made a run for the door. 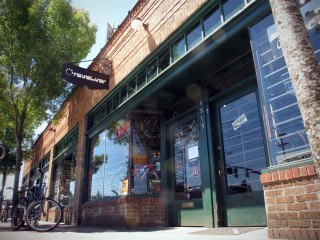 “It turned from inquisition to confrontation at that point,” recalled Ethan. They met at the shop’s front door. “I was like, ‘You’re not getting out of here. This isn’t your bike’.” As the two men struggled near the doorway, Ethan recounted his internal debate: “Do I continue with this confrontation, or do I let this guy go? My fist going toward someone’s face isn’t a natural impulse.”

Then Eric joined the confrontation, asking the thief why he was trying get away if the bike wasn’t stolen. Eric then grabbed bike, as did a third employee. “I kept saying, ‘You’re outnumbered!'” recalled Ethan, “I was just trying to persuade him to let us have the bike.” A customer who was in the shop also got involved by proclaiming loudly, “I’m calling the cops right now!”

At this point, the first thief had already left the shop, and ultimately, the one involved in the confrontation let go of the bike and ran outside. Ethan and Eric slammed the door behind him and locked it (they didn’t want the thief to damage the store and they wanted to keep the other customers safe). The thieves ran and headed east on Rosa Parks Way. Ethan gave chase but they were out of sight. Unfortunately, they got away.

Ethan is especially sensitive about bike theft these days. Revolver owner Mark Pickett got his bike stolen last week, and a customer had a bike stolen from a roof rack at New Seasons (across the street) a few days ago. “Bike theft is pretty rampant in north Portland right now. I want bike thieves to go to jail,” he said, “I want more consequences.”

For Audrey, she’s happy to have her bikes back safe and sound. “The guys at Revolver are badasses for recognizing a shady situation and thinking so quickly on their feet, and they’ll be getting my business from now on, and as many of my friends I can steer to them.”

She’s sad that her fully decked-out Marin commuter (which she named “Tank”) is still missing, but, she says, “Knowing now how dumb these criminals are, my spirit is buoyed that I’ll be reunited soon.”

Revolver is a great bike shop, this doesn’t surprise me at all.

They don’t have to go crazy, just make the penalty the same as for stealing a car.

are
Reply to  Dan

Happy about the good news and here’s to Revolver, a fine bike shop!

How awesome is that!!!

It looks like I have new bike shop to visit soon.

Yay for Revolver! I just spent some money there Wednesday night. I should probably go spend more!

Way to go guys! Thanks!

Why do bike thieves take their stolen loot into a shop the second they steal it? I am confused.

I wish the bike shop had a security camera. Those thieves will be onto the next dozen bikes already.

And for the love of Cheezus, LOCK YOUR BIKES UP! Even if they are in your garage. LOCK THEM UP!

Probably because they think the faster they can get into a shop or post it on craigslist, the less time the owner of a stolen bike has to get online and register it as stolen, which is exactly what prevented them from getting away with it in this case.

All bike shops should check all bikes’ serial #s every time. But I guess they’d lose business then, right?

Hey, now, that’s fair … most of them do. Or at least try to, but there is no nicely unified and accessible system for doing to. You can read some of the details in Sarah Mirk’s article ‘hot wheels’ (http://www.portlandmercury.com/portland/hot-wheels/Content?oid=2364030) that touches on the licensing/permitting issue if you want to, it touches upon the topic, which I believe is the same RAPID system used by pawn shops.

“Unfortunately, they got away.”

ENOUGH already. They’ll be back at it again tomorrow. This is sickening.

It’s time for Bike Portland’s edition of Bait Bike. It would be great at catching the crooks red-handed w/police and held accountable. Good journalism, too—really Jonathan, you need to look at spurring something like this on it would have tremendous support.

Time to be proactive, this issue is not going to away being passive like we are.

We’re getting picked off like crazy and I’m tired of feeling uneasy about locking my bike up and worrying about my stuff getting stolen while I try to enjoy a restaurant or other business.

Anyone with me or I am just that punitive?

Had a bike stolen, and retrieved (this in Massachusetts) because the thieves were awesomely stupid. Did a little research while it was at large, and ran across some sort of a Lojack-like device for bicycles called “SpyBike”. Seems like this would be perfect for a bait bike.

By-the-way, the bikes shops around here (Belmont, Arlington, Cambridge) are awesome. After I got the bike back, I rode it back by the ones I had dropped a flyer off at, and at two of them the staff were almost confrontational until I popped out the uncropped picture of me and the bike. At another, they recognized me, but they recognized the bike first.

Wow. They were stolen about 1 block from me. Time to put all my bikes in the basement.

Great job Revolver Bikes, and great job BikePortland for maintaining a stolen bikes listing that enabled a couple of quick thinking guys to check this out in real time. Kudos all around, though too bad no one also thought to snap a photo of the bums. Being dragged from a Bakfiets would be too good for em!

Of course, nobody has bemoaned the fact that the thieves were (accurately) stereotyped.

Sometimes stereotyping DOES work. I’ve seen many people on bikes they had no business being on. Heck, I even saw what I was 99% was a stolen bike transaction right on the sidewalk by my house.

The people at Revolver are the best.

I just had three bikes stolen from my garage last week about five blocks away from Revolver. I am pretty much devastated. I commute year-round to Beaverton and not having a bike has put a stop to my commute. Hearing this story makes me think that folks at Revolver are going to get my business for my purchase of my new bike. Thanks Revolver folks.

Revolver is a great shop. I’ve bought a bike from them, recommended them to 2 friends for purchases. We go to them for any work or parts we need.

Way to be, Revolver!

You may wish to contact Trimet with a copy of your police report to request the video footage from the time they entered and exited Revolver. There is a TRIMET camera at each end of the MAX platform…plus the Chevron and other area businesses may have cameras. Hurry though since TRIMET may only have a few days of storage (3?).

Awesome job by the guys at Revolver. It is good to see people care. Too often bike theft is just chalked up as a victim-less crime and there fore tolerated. My favorite quote was a year or so ago by the Homeless Advocate who described bike theft as people just trying to survive in a cruel world. It isn’t going to be a bike theft task force that ends the rampant bike theft. It has to come from the citizens and more direct action to say no to the petty crime and those who act to justify it.