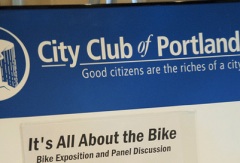 Following an overwhelming vote of support from their membership, the City Club of Portland is wasting no time in getting to work on implementing the recommendations in their report on bicycling in Portland.

On June 13th, City Club members voted 254 to 31 in favor of the report which recommended that local elected leaders and policy makers make a much stronger commitment to cycling because it is, “an affordable and efficient means of transportation that is essential to continued growth in the local economy and overall quality of life for Portland residents.” The report recommended a stronger focus on bicycling in local and regional transportation plans, more physically separated bicycle infrastructure, more bicycle counters to help with data collection, more funding set-asides for bicycle infrastructure, a 4% excise tax on new bicycles, and more. (See all the recommendations here.)

Greg Wallinger, City Club’s research and policy director, said they’ve already begun to form an Advocacy Committee that will lobby to implement their recommendations. The committee will be chaired by Craig Beebe, who currently works as communications and development coordinator at 1000 Friends of Oregon, a non-profit that works on land-use issues. Beebe recently discussed the report as a guest on OPB’s Think Out Loud radio program.

Advocacy committees based on their reports are relatively new in City Club’s 96 year history but Wallinger says they’ve become a more central part of the organization in recent years.

In 2010, the City Club’s Forest Park Advocacy Committee achieved seven of 13 recommendations outlined in their Forest Park: A Call to Action report. They successfully pushed the City of Portland to hire a park ranger and conduct user surveys to inform policy and funding decisions. City Club reports have also impacted policy discussions around major issues at the state level like PERS reform and redistricting.

Wallinger says the Committee will report back about the success (or failure) of pushing through their bicycling recommendations in 12-18 months. If you’re interested in being part of the committee, they’re still accepting applications via their website.

” Enforcement of the licensing of bicycle commuters is relatively easy. Since over half of bicycle commuters must cross the river at a very limited number of locations, it does not require a significant police presence to simply ticket bicyclists who have not contributed to Portland’s bicycle development.”

pick on the commuters ? stop traffic flow ? check points ? then, if you have been checked & cleared , get stopped over & over ?

Should probably do the same with cars for insurance and current tags then too.

No kidding. There is a car that someone drives on my block with expired tags on an out-of-state plate.

It should stick out like a sore thumb, but in two years of living on the street, I’ve never seen a ticket on it and the owners have yet to pay for Oregon plates/tags (and contribute to keeping up the roads…).

So they publicly release a report and THEN vote on whether to endorse it? Does anyone else find this kind of odd and backwards?

sure, but the thought that CC members could think this up and believe enough to write & submit this idea is scarey.

I’m so glad these city club elitists want to squeeze money of out me for riding my bicycle, while the polluting multi-ton death machines roll on…distracted drivers and all.

Unless you buy a new bike, this “fee” would not really affect you.

I would rather have a fee on car sales. Let’s tax the source of the problem not the solution.

First, City club is simply people who choose to pay $190/yr to join a club and then share their points of view. They are not elected, representative, nor experts.

Second, they have biases one would expect from any small random group taking on a topic. For example, the chair of another City Club committee said simply “Bikes have too much clout in city hall.”

Third, they are not always careful with facts. When a factual error was pointed out in the draft report on Forest Park a couple of years back, they said “It is difficult to make corrections once a draft has been made public.”

Fourth, there is no critical review. For example, members do not receive critiques or presentations from those outside the club prior to them voting to accept a report. I’d like to know what fraction of “draft” reports are not approved.

City Club clearly meets the needs of members in some positive ways, but I hope our leaders stay focused on people who are actually experts and on citizens, not on the opinions of one self-appointed clique.