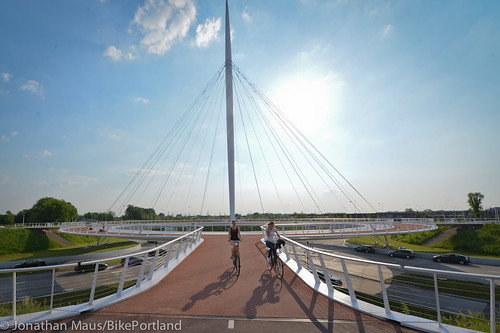 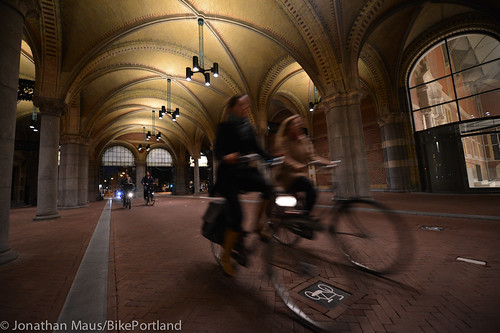 A bicycle-only path underneath the Rijksmuseum in Amsterdam.
(Photos © J. Maus/BikePorltand)

We’ve all heard of the Seven Wonders of the Ancient World right? After two weeks in the best bike cities in the world, I think it’s time we put together a list of the Seven Wonders of the Bicycle World. If such a list existed it would include two bits of infrastructure in the Netherlands: the bicycle path that runs below the Rijksmuseum in Amsterdam and the Hovenring in Eindhoven.

I’m not an expert on either of them (read the excellent Bicycle Dutch blog for more detailed coverage); but I have been in their presence long enough to understand that they transcend mere infrastructure.

The Rijksmuseum is “The Museum of the Netherlands.” It was founded in 1800 and moved to Amsterdam in 1808. The building it’s in now was built in 1885 and it was the first thing I saw when I stepped off the bus in Amsterdam (my hotel was right across the street). As luck would have it, the museum just re-opened in April after a 10-year renovation. One night I went on a walk and just by chance happened to see people riding underneath this amazing, palatial structure. Upon closer inspection I realized it was a designated bicycle path. My first thought was, “Oh my god!” And then I thought, “How come I’ve never heard of this before!?”

I stood, jaw-dropped and took it in. Then I pulled out my camera. 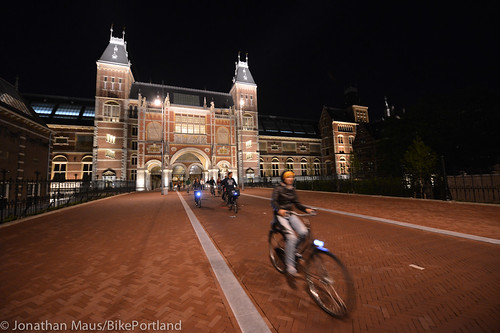 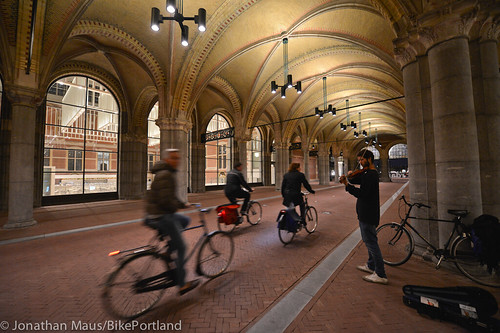 Yes, that’s a guy playing violin. It was magic. 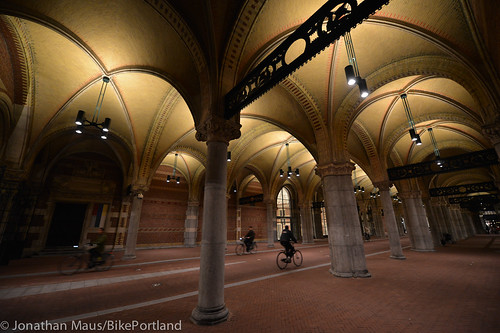 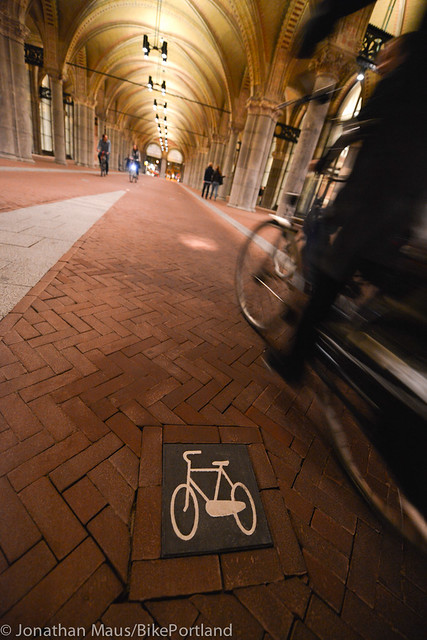 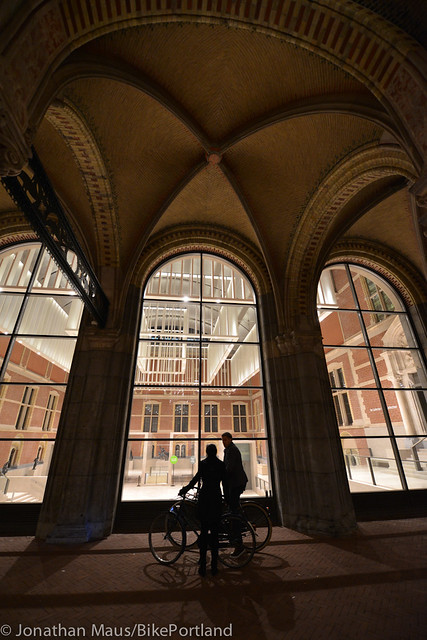 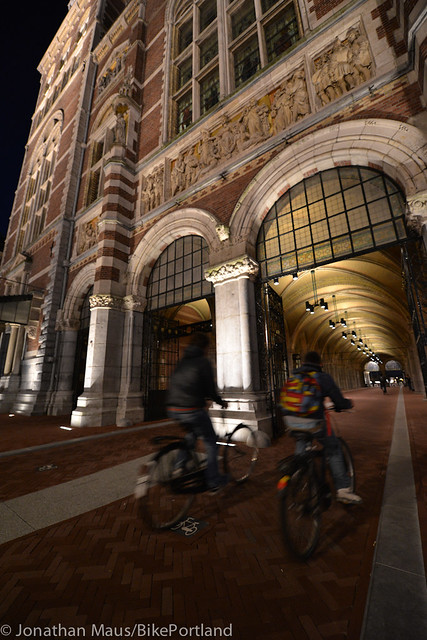 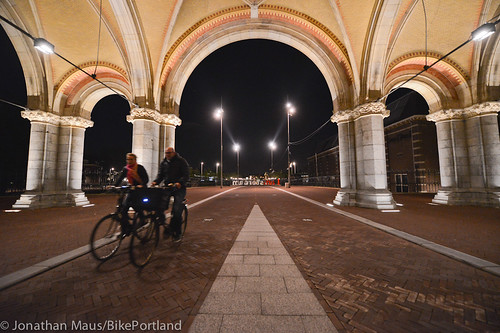 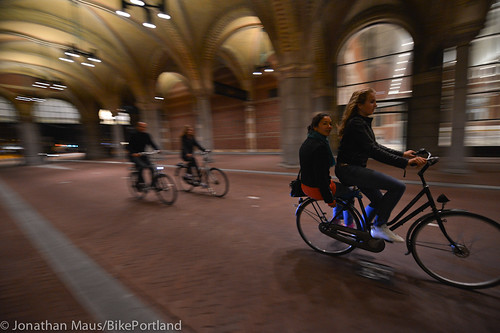 The ambiance on that path was awesome. Couples came by holding hands while riding. One young lady, sitting on the back rack of a friend’s bike, broke out with several bars of opera, then her giggle echoed amid the columns.

From what I’ve learned, there was quite a controversy about whether or not to allow this level of bicycle access. The architect and museum director didn’t want it, insisting that the presence of bicycles and their riders would detract from the deep cultural significance of the museum. According to a local source, one of the lead advocates pushing for the bike path, a woman named Marjolein de Lange, ultimately convinced the powers-that-be that bicycles belonged. Her winning argument? Bicycles are also a significant part of Dutch culture.

I first heard about “the Hovenring” — a suspended bicycle overpass — when pictures of it went viral after it opened last summer. Then a few weeks ago I saw it again — in the pages of none other than National Geographic Magazine. Located in Eindhoven (126 km south of Amsterdam), the Hovenring was built to get people on bicycles safely over the A2 ring-road a few miles west of the city center.

Yesterday I hopped on a train to make a pilgrimage to this amazing piece of infrastructure. I’m happy to say that it was just as impressive in person as I hoped it would be.

From every direction, very gradual and straight approach ramps (there are six of them) lead people up to the main ring. Once at the threshold, the path — like wide outstretched arms ready for embrace — welcome riders into the the ring. The rich red surface material (which feels like soft grip tape), contrasts with the bright white curvilinear railings. The path itself is very wide, at least 15-18 feet at least. A towering and pointed spear rises from the center and cables attach to the inside diameter of the ring. The path is suspended on the other side of the cables, so it feels (and looks) like you’re floating in mid-air over several lanes of the fast-moving motorway below. There’s no signage to clutter the aesthetics. No warnings about what not to do, and no directional markers to point the way. It’s just pure and simple and beautiful. The fact that it was made for bicycle traffic makes it even more so. 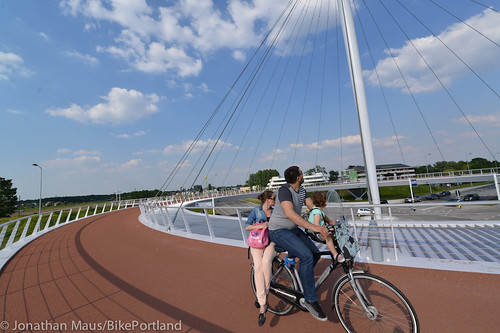 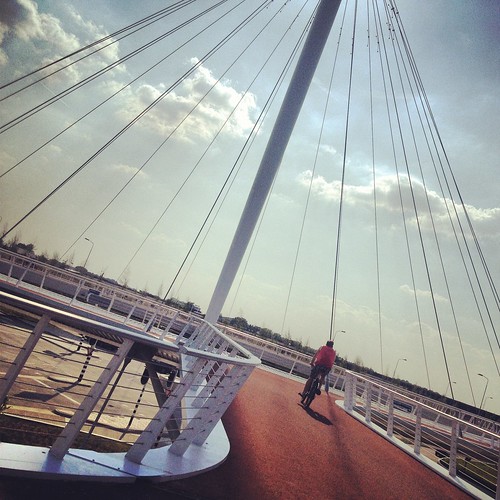 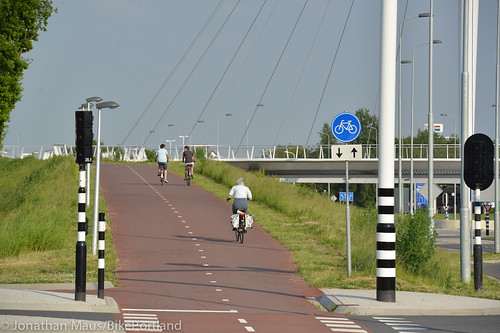 The ramps are very gradual. 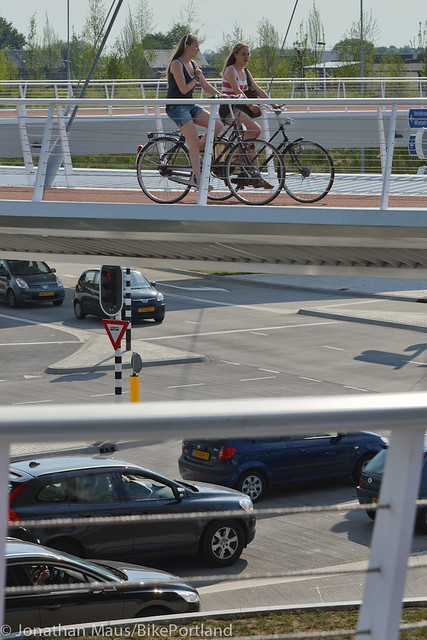 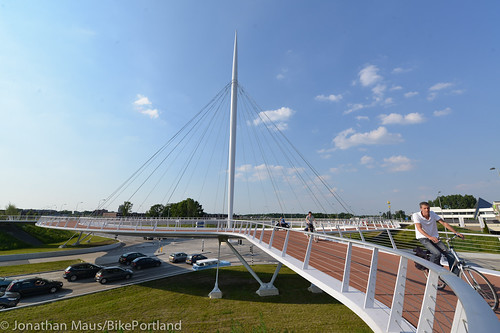 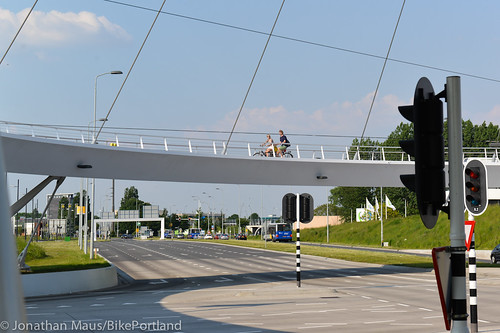 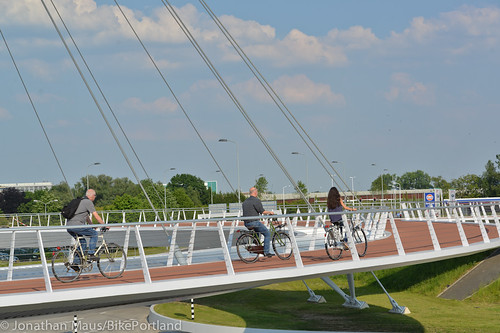 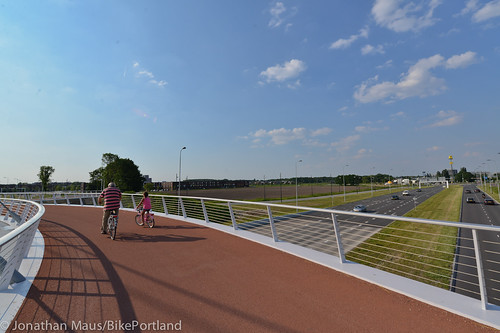 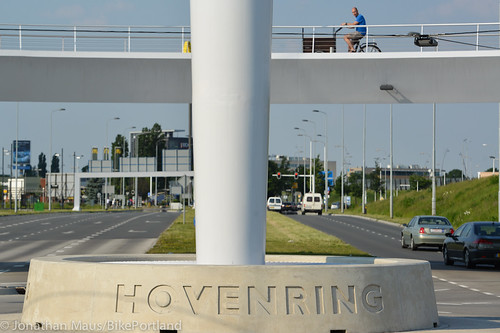 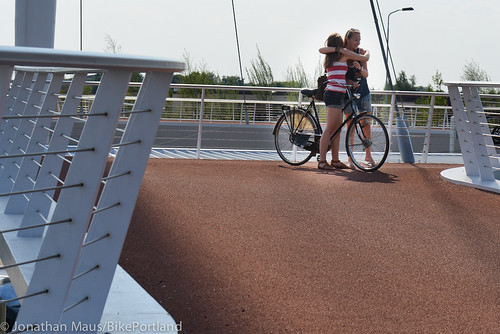 A hug in the middle of a major highway. 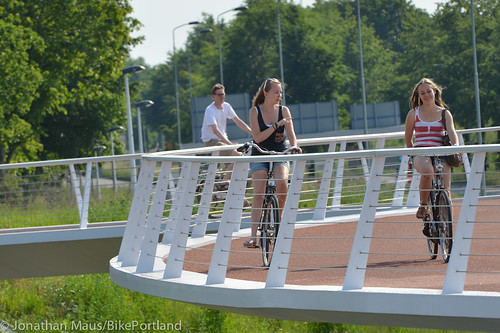 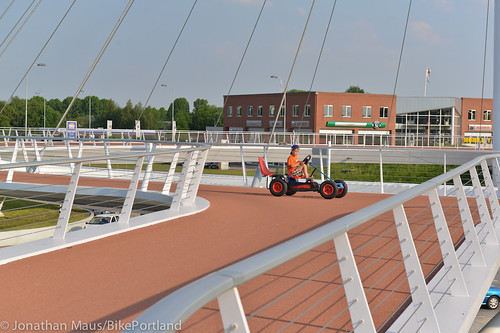 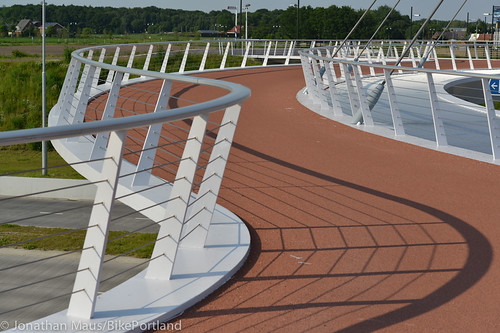 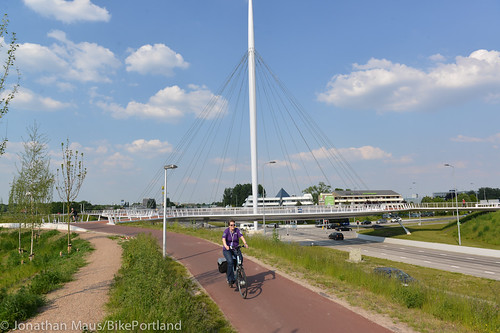 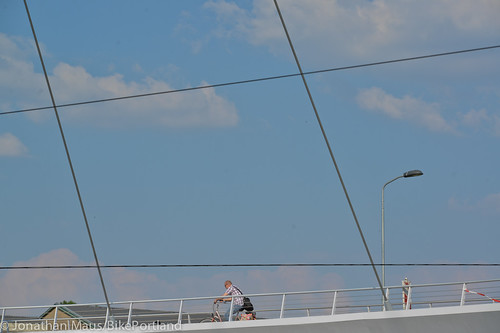 It feels like you are part of the sky.

While I walked and rode around the Hovenring, I saw groups of teenagers hanging out (I could just imagine them saying to each other, ‘Let’s meet at the ring!’), and a steady flow of traffic. I bumped into the owner of a hotel just a stone’s throw away from the overpass. He had several complaints; mostly about the hassles of construction, the lack of access to his business, and the $30 million price tag (“It’s a year of crisis here,” he said, “maybe we should spend it other ways.”). But despite his feelings, the man shared, “At the end, we have to be positive. It’s something new! And Eindhoven is proud of it.”

Another sign that the Hovenring has been adopted by the locals was a man who brought his kids up the ring just to play. A little girl on her bike and her brother in a four-wheeled pedal car did lap after lap while dad waited near one of the ramps. “It’s fun for them,” he said, “they don’t have anything like this at home.” Neither do I, I thought.

Both of these magnificent bicycle paths say something about the people they were built for and the leaders who made them happen. There’s a level of respect for bicycling over here that is hard to fully grasp unless you’ve been here. These are monuments to that respect. They tell people who use them: You are important and we don’t cut corners on your infrastructure.

Can you think of other pieces of bicycle infrastructure that belong on the “Seven Wonders” list? Check out more photos in the gallery and read more of our coverage from Copenhagen and the Netherlands here.

Great coverage the last few weeks. Really enjoyed it. My take from spending time in the netherlands is it is the consistency of the infrastructure and not the individual “wonders” that make it such a great place to ride a bicycle.

Great comment Ed. I would have to agree, the bike infrastructure in the Netherlands is phenomenal.

Read Pete Jordans excellent new book
In the City of Bikes: The Story of the Amsterdam Cyclist
and get the entire fascinating on again and of again history of bikes going thru the Rijksmuseum..his entire book is really an inspiring read.Can’t recommend it enough.

I remember my first time cycling through Amsterdam with my 1995 Fietserbond guidebook map and the astonishment of approaching a building, The Rijksmuseum, that allowed bikes to pass through it. The new photos of it are stunning since the building has been under renovation for what seems to have been a decade. The Hovenring is still on my ‘spoke’ list.

And I am not surprised that Marjolein de Lange was the one to help push for witty access through the building while she was (is) with Feitserbond.

The Dutch “don’t cut corners on their [transportation] infrastructure,” whether it be: their excellent network of interstate-class highways (the A2, etc.); high quality and frequent rail service ; top-notch harbor/waterway facilities; international airport (Amsterdam’s Schiphol Airport is among the best); and oh and yes, the world’s best and safest bike and ped infrastructure. This is what a fully developed, 1st world country looks like in 2013.

Dick, not holding back, are ya?

Marc, that’s you in the second to last Rijksmuseum photo, yeah? If not, he’s your twin.

Paul, apparently I have many twins around the bike world, I can’t keep up anymore. Last week one was spotted in Hackney, London: the guy in question was identified as a vehicular zealot who’s making sure Dutch-style infrastructure will never see the light of day there. Yeah, my evil twin 🙂

If Steve Novick does not hire a Dutch national to run PBOT…..

That center pole suspended bike overpass is great…and it’s the type of thing, with accompanying Amsterdam style cycle tracks extending beyond it, that should have been planned and built to support active transportation crossing of Hwy 26, for the rapidly developing area around Intel in Washington County.

OK..thanks…whatever is accurate and gets the message across.

Incredible photos, as always. I’ll take you up on your challenge and nominate the Eastbank Esplanade.

The Hovenring has its own website, hovenring.com . There you can find some schematics of the structure and other info. And keep in mind that de $30 million price tag includes the reconstruction of the car traffic intersection.
The Rijksmuseum underpass looks great. I moved out of A’dam before the renovation was ready, but before cyclist already could travel underneath. It looks a lot cleaner, brighter and opener now. Acoustics were always fun.
The four wheel pedal car is called a skelter. Something you mainly see in the Netherlands and the Dutch border regions of Belgiumand Germany. Cool thing is that there are attachments available. Agriculural style or construction style stuff (diggers, cranes, bulldozer etc). Kids in my neighbourhood have a snowplough attachment and in the winter when it snowed they went door to door offering to plow the driveway for a small fee.

We could do this at 82nd Avenue and Foster’s Road.

I Call it the moneypit of Eindhoven. Initiale it should have cost 23 million euro and it went 50% over budget and we are not there yet.

And then I cannot say how many take another route if it is windy. I find it a disaster money wise and from a bycicle perspective.

New designs sometimes take a while to get the bugs out. Wikipedia’s article, and this page from the hovenring site, describe resolution of cable vibration due occurring with the wind: http://hovenring.com/structure/

The text on the ‘Design’ page of the hovenring website says that housing development and increasing traffic compelled Eindhoven to conceive of a solution.

You van vote for the Hovenring now! Nominated for the Dutch Design Awards!
http://www.fontanel.nl/publicaward/hovenring/

I loved my 3 days in Amsterdam. I want to go back soon.

My best advise of bike ways in Amsterdam, just watch out for them mopeds.