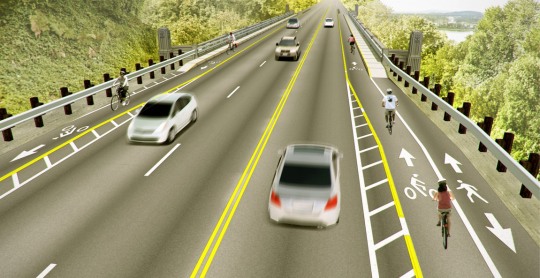 A rendering by Owen Walz of what SW Barbur Blvd could look like where it passes over SW Vermont.
– Click to enlarge –

As you might recall, a few months ago the Oregon Department of Transportation (ODOT) was feeling heat from the public to consider a road diet on SW Barbur Blvd. Specifically, people were urging the agency to consider reconfiguring lanes to improve bike access over two bridges as part of a $5 million rehab project. The bike lanes on SW Barbur where it crosses SW Vermont and Newbury streets drops suddenly and and leaves people on bikes in a vulnerable position. 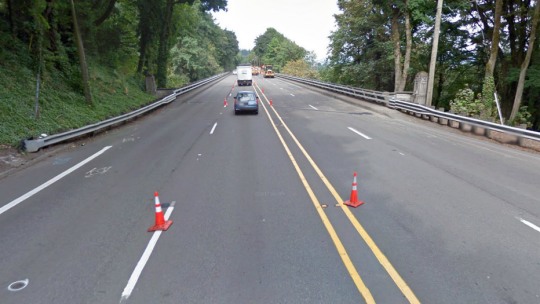 Now, local illustrator and graphic designer Owen Walz has released a rendering of what a road diet on SW Barbur could look like. Walz is volunteer with Friends of Barbur (Facebook), a group of citizen activists that have been pushing for a more bike-friendly Barbur for several years. (A road diet is called out as a recommendation in the Barbur Concept Plan, which is set to be adopted by Portland City Council tomorrow.)

Walz created the rendering above as part of a series of visualizations for the Bicycle Transportation Alliance’s (BTA) forthcoming Blueprint for Better Bicycling.

As for the status of the Barbur road diet idea, last time we checked (in March) ODOT had handed off the conversation to Metro’s SW Corridor planning process. Here’s more ODOT Community Affairs Coordinator Jilayne Jordan:

“A road diet is included in three of the five Southwest Corridor Plan project packages now being analyzed and modeled by Metro. Results of this analysis are expected in April. This analysis will provide all project stakeholders with a comprehensive look at the benefits and impacts of this project for cyclists, pedestrians, future high capacity transit operations and auto/freight users. Meanwhile, the Barbur Boulevard (OR 99W) Newbury Street and Vermont Street Bridge Rehabilitation project will proceed as planned, in a manner that does not preclude nor prejudice potential future redesigns of Barbur Boulevard.”

To learn more about the SW Corridor Plan and (possibly) about the prospects of a road diet on SW Barbur Blvd, there’s an open house this Thursday (4/25) at 5:30 p.m. Multnomah Arts Center (7688 SW Capitol Highway). You can also peruse the official SW Corridor Plan website.

LOVE IT!!! I HATE having to play dodgecar on SW Barbur. I’m sure that the motorists hate when I take the lane at the first bridge, and don’t move back until I get to that fly-around on the far side of the second.

Please Powers-that-Be… Do this!

As a temporary safety compromise:
Install a HAWK style warning flasher highlighting a “BIKE LANE ENDS / SHARE THE ROAD” whenever a bicycle triggers a loop or camera detector.
It would go like this:
Sign is always there,
When a bicycle approaches the highway to the danger zone they are detected,
The HAWK enhanced safety warning lights activate,
Lights stay on for 30 seconds after sensor is triggered.

Then get on to the REAL fix – a road diet.

Chris I
Reply to  q`Tzal

Paint is pretty cheap, especially when they are already working on the road.

Awesome. As someone that grew up very close to this stretch, I strongly support this. There is absolutely no need for two northbound vehicle lanes in this section.

I appreciate that the pedestrian zone is placed furthest out towards the open view of the valley below. It shows an understanding of how the different modes are likely to utilize the space and prioritizes those most likely to enjoy the scenery without disrupting other modes’ flow.

Thanks Joseph! I wish. If you know someone who actually has a budget for this kind of thing please let me know.

Curious what tools were used to make the visualization? Advocates need to up their game and this is a perfect example from some who have done that.

Thanks Peter. I put this together with Sketchup, a rendering plugin, and Photoshop. I’d share the process with anyone who’s interested, although it’s not fully refined yet.

I’d attend a workshop on how to do street visualizations. I’m familiar with various photo editing tools but looking over someone’s shoulder at techniques would be helpful.

Yes nice work Owen. Add me to your list for an informal 101 session on Sketchup. (Might make a great wonk night item or Pedal Palooza activity.)

Looks fantastic. This is exactly what I envision. I would ride Barbur home from work a lot more often if it looked like that!

I take Beaverton-Hillsdale to Barbur, which adds about ~4 minutes to my commute, versus Barbur, exactly because there isn’t a setup like this.

This would be fantastic. Barbur really doesn’t get much traffic Southbound on these bridges until the evening rush. Northbound I’ve never seen a need for two lanes.

Agreed. And my anecdotal experience from riding Barbur over the last year and half is that every time I had someone brush by me in the too close ( a few times WAY too close) it was going southbound… and usually at the second bridge.

I wrote a letter in support of this project, told my story and set it to ODOT. This was my commute from NW for 5 years, this section is a nightmare and is the only time in my whole life or riding that I was almost killed. Fix this NOW.

Looks pretty darn good to me.

I just sent a letter to ODOT this morning urging them to consider this option.

Love the concept, but in your final version take care to flip the hash markings 180 degrees.

Yes ditto – good job. Add me to any how to session too.

I’ve been biking on public highways my entire life in Oregon, but I have never biked on Barbur because I believe it is too dangerous. This looks like it would be a good fix.

Yes! I’m excited for this to happen. More access to Southwest is sorely needed. Thanks for the rendering, Owen.

Could you also imagine some bollards in this rendering?

Chris I
Reply to  AndyC of Linnton

I think this rendering shows the project after 2 weeks, when all the plastic bollards have been knocked down by careless drivers.

You belittle the problem.
It isn’t a matter of paint but a matter of ODOT being willing to take the heat from the non-cycling public (sadly a BIG angry majority) if they take a lane away from the motoring public to say nothing of the “Hole-in-the-Air” provision that freight interests will cite to show that the lane cannot be removed/restricted from automotive access.

It is one thing to say “it’s easy, JUST DO IT!”
It is an entirely different matter to have to share public resources with a public majority that doesn’t acknowledge the need exists.
For ~$500 I can get enough rubber speed bumps and engineering grade epoxy to permanently reduce the speed limit on this stretch of Barbur to 25mph; this would be be illegal and selfish.

Work in the system or invite anarchy.

q’Tzal, You cite a public majority of those who don’t acknowledge the need exists yet I am personally chair of a SW Neighborhood, sat on the Barbur Concept Plan working group, have been involved in SW Corridor Plan meetings, and have spoken with many a SW Neighbor the majority of whom are not regular cyclists. In this process I have personally engaged hundreds of people most of whom only drive the corridor. In my estimate of these interviews I’d estimate only about 1% oppose the idea. So where is the opposition? Is it coming from people who live nowhere near these bridges and only use Barbur as a faster alternative to I-5?

This is precisely the reason why PBOT needs to work more closely with ODOT and make this a priority. Otherwise we all just await the inevitable severe injury or death that will occur in the present state.

If you don’t think that there are lots of drivers that will be upset at the loss of a lane (to say nothing of freight haulers) you need to talk to more people. No question changes are needed but taking away a lane can’t be the only solution. How about narrow suspension bridges on each side. They could come in real handy when both the existing structures fail during the cascading quake.

You belittle the problem.
It isn’t a matter of paint but a matter of ODOT being willing to take the heat from the non-cycling public (sadly a BIG angry majority) if they take a lane away from the motoring public to say nothing of the “Hole-in-the-Air” provision that freight interests will cite to show that the lane cannot be removed/restricted from automotive access.

It is one thing to say “it’s easy, JUST DO IT!”
It is an entirely different matter to have to share public resources with a public majority that doesn’t acknowledge the need exists.
For ~$500 I can get enough rubber speed bumps and engineering grade epoxy to permanently reduce the speed limit on this stretch of Barbur to 25mph; this would be be illegal and selfish.

Work in the system or invite anarchy.

I soooo wish this would happen. This is part of my commute to and from NW starting back in Tigard. Early enough in the morning and there’s not much traffic northbound. But coming home at rush hour can be a bit hairy as drivers accelerate away from their stressful day downtown. This just makes too much sense to me.

I’ve been riding Barbur since 1987, SW to close-in N. Although this would make it nicer for bikes, at present I usually just ramp up onto those narrow sidewalks SB. I’m in Hillsdale so NB I’m taking the Capitol Hwy overpass. I want to see a better connection from Barbur to Front.

I hate to be the one to say this, but we all know what type of event would change that projected timeline for a bike lane refurbishment from ‘decades’ to a lot sooner than that.

So who wants to be the sacrificial lamb?

A few years ago I talked to a Portland cop who used to bike to work — but stopped because his route involved Barbur and he decided it was too dangerous.

Attention ODOT: when police officers are afraid to use your bike lanes, and when Indy is willing to add several minutes to his commute and take Beaverton-Hillsdale/Capitol (also dangerous!) instead, it shows that SW is in need of serious help. Please (consider and) approve this project.

And if it’s going to take a long time, please don’t this needed road diet delay the improvements already planned for the bridge sidewalks/ramps: even those changes will be a huge safety improvement for those of us who occasionally ride this road today.

Great rendering — though it would be even better if the little white-stripey-buffer area between the auto and bicycle lanes were replaced with a planter strip, or at least some raised concrete, to add an added level oh physical and psychological protection, especially for any potential pedestrians on the other side of the bicycle lane… but hey, this would be a great start, and better than what’s out there today for sure!

Cool! I will continue to Not bike on Barbur b/c it trips my Danger flag, but, it’s better than it was! 🙂