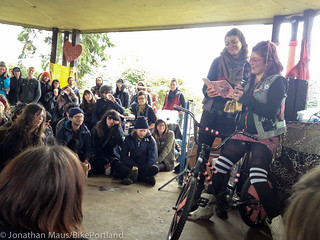 Dozens gathered at Peninsula Park on Sunday to remember Kiki Larsen. Kiki, who danced with the Sprockettes as “Agent Crush” for nearly 10 years, passed away on Thursday.

Kiki died of a drug overdose. She was found in her room by herself on Tuesday and taken to a hospital where she passed away a few days later despite attempts to save her. Her family and friends were by her side.

At her “For the Love of Kiki” memorial, friends and family shared stories and memories of her life. One by one, people stood up in front of a huge crowd, and in a testament to Kiki’s impact on the people she knew, the sharing went on for hours. And there were as many laughs as there were tears. 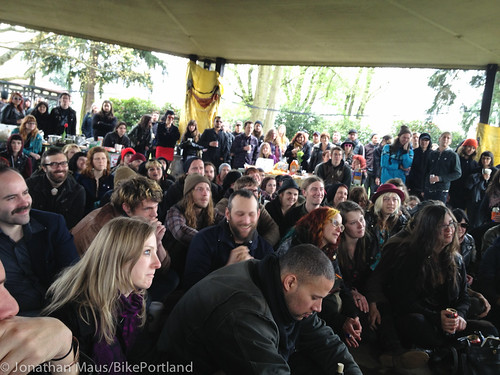 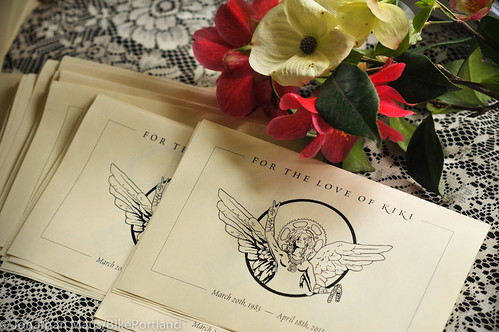 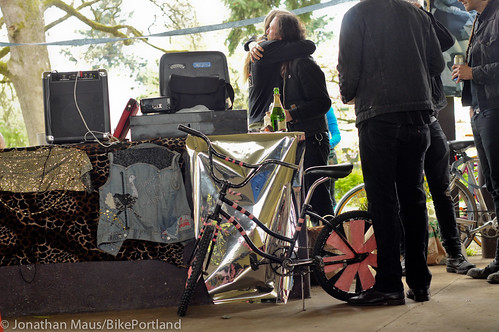 Kiki’s Sprockette bike, “Fat Elvis”, and some of her outfits
helped decorate the memorial service.

Kiki was a beautiful person with a soul, style, and attitude as fiery as her curly red hair.

My family and I knew Kiki from Sprockettes. My wife Juli danced with her for several years and my girls played with her at practices and at Sprockettes summer camp. We joined them on their Operation: Bike Nation Tour with New Belgium Brewing back in 2008. My youngest daughter, seven-year-old Danica, wrote this poem about her (which we printed up and hung at the memorial)… 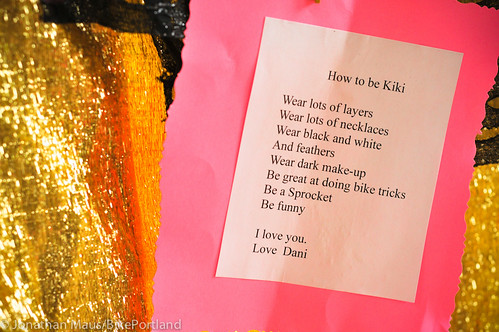 I’ve photographed the Sprockettes since 2006 and Kiki has loomed large in many of my images. She would always manage to find my lens and add extra flair to her smile and her movements when she knew I was shooting. I loved watching her dance. She embodied so much of what I find inspiring and important about Portland: Community, creativity, ridiculousness, independence, strength, DIY style, and living on your own terms. Going through my hundreds of Sprockettes images to find ones of her brought back a rush of cherished memories… 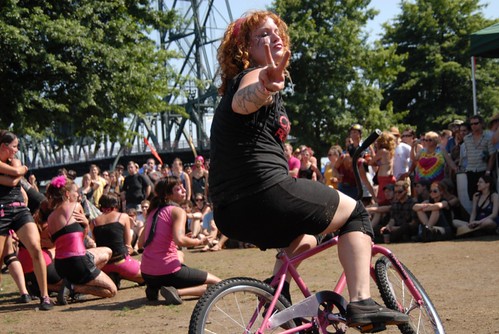 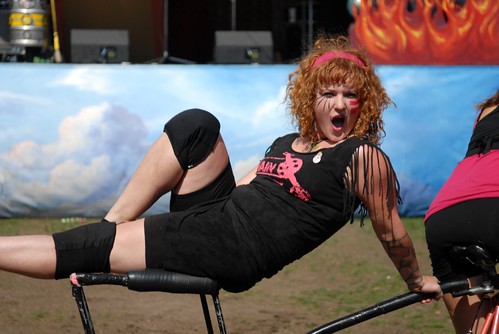 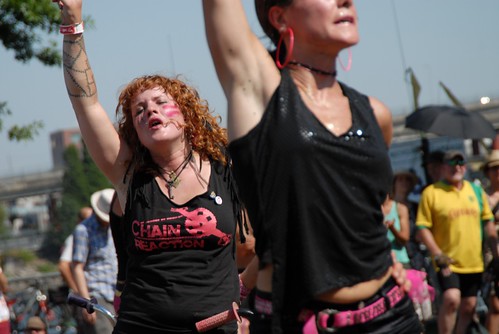 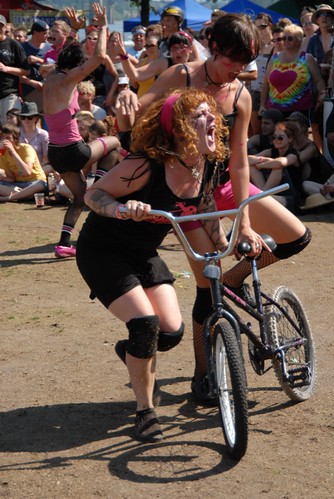 In Waterfront Park for the 2008 Tour de Fat. Temps were in the 100s. It was hot just watching them, but Kiki still poured everything into her performance. 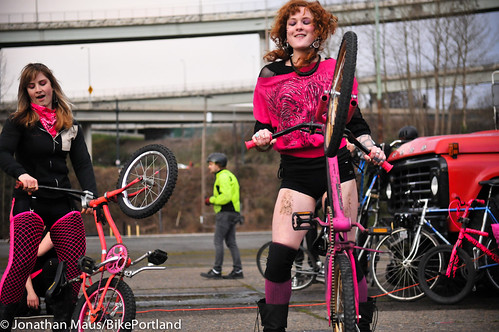 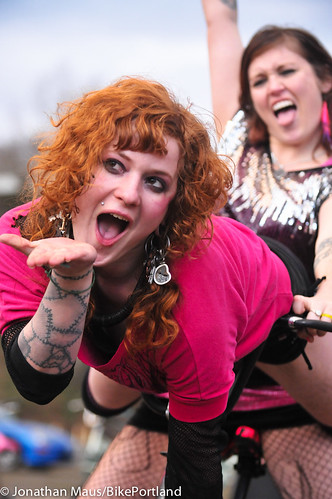 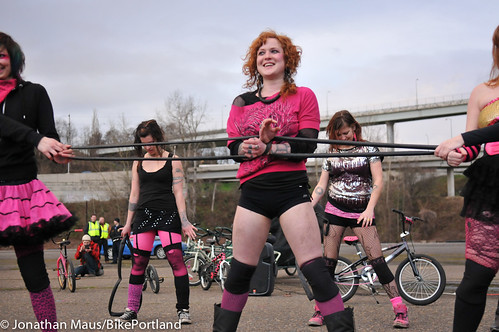 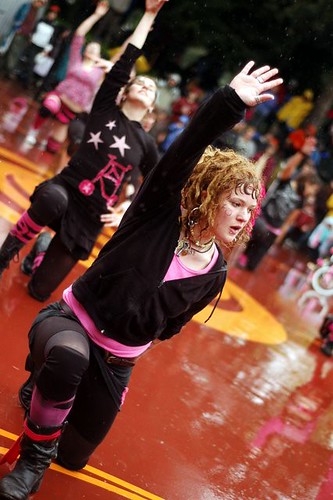 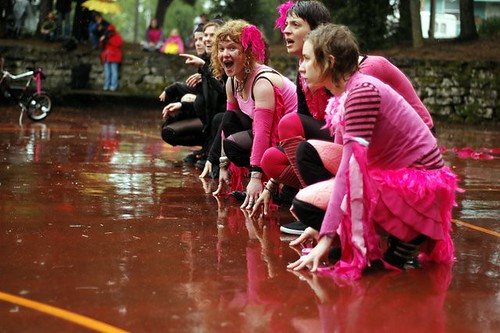 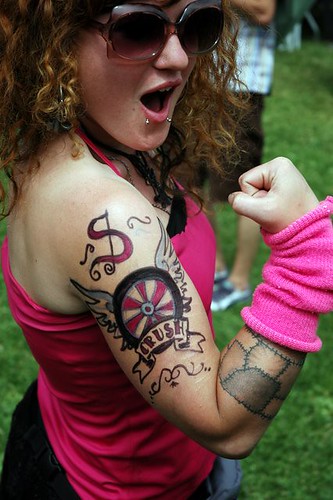 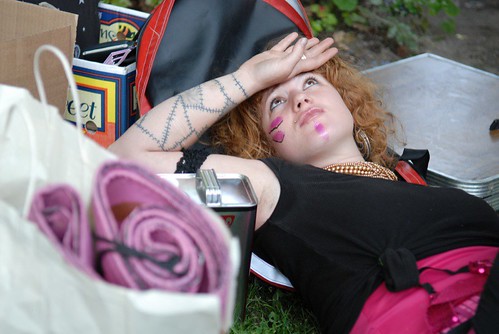 Taking a break after a performance in Ashland, Oregon on July 17th, 2008 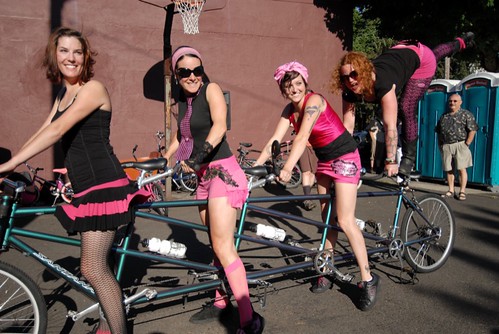 Kiki was always looking to be different. At the Cirque du Cycling, June 14th, 2008. 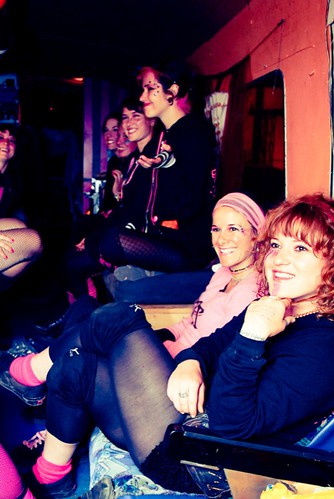 Backstage of the Cyclecide show in San Francisco, July 20th, 2008.

For those that knew Kiki or enjoyed her sparkly and charismatic stage presence during countless performances with the Sprockettes, the marquee outside the Florida Room (where she once worked) on Killingsworth sums it up pretty well, “The world is less bright without a Kiki in it.” 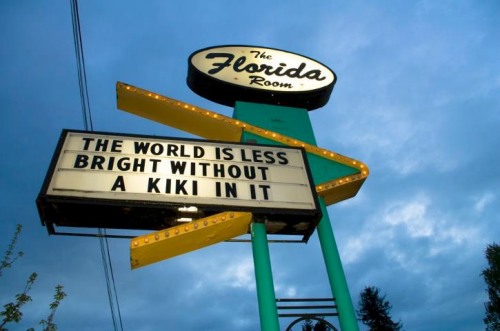 Kiki’s death has brought up very complicated feelings and emotions. We always think we have a strong community, and then something like this happens to one of our own and we can’t help but think, why? People are still grappling with these tough questions.

Take care of the people you love and please watch out for yourself and your friends.

—
Phil Sano posted a nice remembrance of Kiki on his blog and heartfelt words and memories continue to pour onto her Facebook wall. Kiki’s friends are helping her family pay medical bills and other expenses associated with her passing. Check out the campaign and donate if you can at GoFundMe.com.

What happened to her?

It would be insightful to know HOW someone so young & alive has slipped away. It’s human nature, not just morbid curiosity

Thanks for your questions. I just added it to the story. She died of a drug overdose. I was struggling with how or if to mention it at all; but I’ve decided to add it in. I think we need to talk more about this type of stuff, not less.. But it’s not easy and I’m not fully comfortable sharing it here. Thanks.

Thanks, and well written. You’ve probably taken my favorite photos of her throughout the years… Who knows how many rad ladies they’ve inspired.

I wrestled with acknowledging the overdose as well. I hate seeing rude comments and hiding the cause of her death could encourage obnoxious behavior as much as telling the truth.

RIP Bike sister so awesome watching you Sprockettes. ride on!

To those asking “How did no one step in to help her?”, it’s very difficult for people to try and help someone with depression or invisible wounds, myself included.

This issue affects all walks of life. Compassion and understanding is the answer in my opinion.

Of all the people I have met in Portland in 12 years, Kiki was truly one of the most sincere and outgoing people. My kid dug the crap out of her, and they would always laugh and high-five each other. I am sending out my best thoughts to all of her true close friends and relatives. I am so very sorry .

I`ve never met Kiki but from what I can gather she was a nice person who had some personal issues, not unlike many of us. What I am most impressed with is how bike people in Portland came togther to celebrate someone so many people loved.

So sad but much respect, Portland,

hi Jonathan, I talked to Juli about this as well. and i know its hard to find the right words sometimes and we all have questions. to answer the question about “How did no one step in to help her?” Burke and I did EVERYTHING we could. a lot of us stepped in to help her. from trying to force her to get counseling to trying to keep tabs on her every move. but Kiki was the only one that had control over her decisions. in the end she was going to do what she was going to do and no one could change that no matter how hard we tried.
ps i do appreciate this article
<3 Esther

I edited that line when I realized how it made both you and Kiki’s other friends feel. I’m sorry for that. I can’t imagine what you are feeling and I understand what you are saying.

It’s more than just biking I feel we are all family on 2 wheels 🙂 cars can feel like silos and ppl on bikes are people.

I think before people judge the family and friends they should think of the loved ones and what they must be feeling. Rarely do families and close friends not try to step in and help. You will never know the hours of lost sleep wondering, waiting and hoping to never get the kind of phone call her family received. So now is the time to mourn with those that mourn, For those that knew and loved her are going through an awful grieving experience. My love to all that knew and loved her.

Has anyone thought about sharing the story of our lovely Kiki? I think our community would greatly benefit and learn from knowing how this happened to us, and it happens all over Portland to wonderful people, who are vibrant, active, happy and beautiful. There are things and resources we can use to aid in prevention of such tragedy and loss. This has to stop happening in our tight knit neighborhoods and communities. Kiki’s story is a prime example of the knowledge we need to be out there and available to educate and guide people who have relapsed or are struggling find support or help. She was such a captivating soul, such a giver, and a friend to EVERYONE in her path. I know her story would resinate with anyone who hears it. I would have never thought in a million years this would be the end of her story. Its a GD tragedy. I think we should rally as one and use her story for awareness and use her legacy to help others. We love you KIKI! #projectkiki