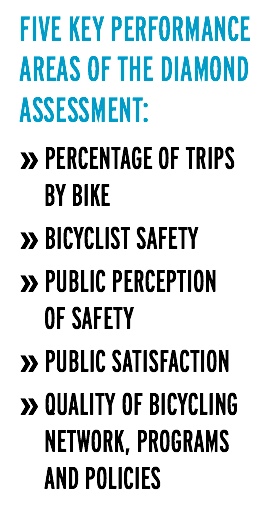 Marching orders from the League.

Portland is one of just three cities in the U.S. to have achieved a Platinum level designation for bike-friendliness from the League of American Bicyclists. Platinum used to be the highest level a city could earn; but now there’s Diamond and the League just announced details on what it will take to reach it.

Does Portland have a chance? Do we even care?

In the current issue of their American Bicyclist magazine, the League’s Bill Nesper writes that they worked with none other than Andreas Rohl, head of the bike program for the City of Copenhagen, to help design the Diamond program. (You might recall Rohl from his appearance at the 2009 National Bike Summit.) Like the Copenhagen Bicycle Account, Nesper says Diamond eligibility will be, “based on tangible metrics and citizen satisfaction.” He also unveiled “Five key performance areas of he Diamond assessment”:

The League will award points based on those five areas on a 100-point scale: 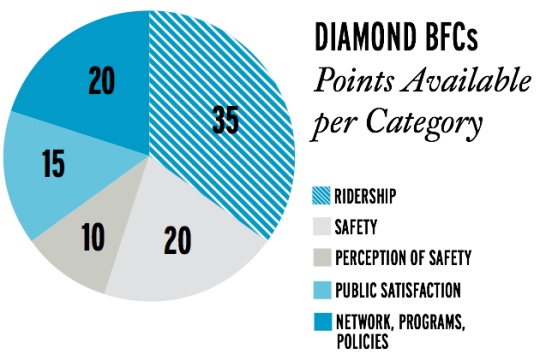 Here’s more from Nesper about how Diamond is different from Platinum:

“The biggest change: Defined minimum requirements for ridership, safety and bicyclists’ perceptions. Right now, the average Platinum-level BFC has a bi- cycle mode share of 12 percent. To get to Diamond, you’ve got to hit at least 15 percent. But that’s not all. We’ll also measure the quantity and quality of the bike network, bike parking and the percentage of children receiving bicycling education. Add to that a public survey to figure out what it would take to get more people riding. Is bicycling easy, safe and comfortable in the community? Is bicycling part of the community culture?”

Going one step further, the League says they’ll customize the program based on, “the unique strengths, weaknesses and opportunities of each of the Platinum candidates.” League staff has traveled to Davis and Boulder (the two other Platinum cities) and they have a Portland trip in the works in order to perform an audit of current bike-friendliness and “create a tailored, five-year plan that sets big goals, calls for bold action, and tracks transformation.”

Then, as if throwing out a dare, Nesper says the League may not give out a Diamond award for another 10 years. That might sound like a lot, but the League’s goal is to have Diamond cities be so bike-friendly they can “compete on the world stage” right alongside places like Amsterdam and yes, even Copenhagen.

When Platinum was first announced in Portland, an up-and-coming transportation commissioner (and future mayor) named Sam Adams grabbed the initiative by the horns and made it a top priority of the City. There was a nine-part Portland Platinum Strategy, a Platinum Portland website, a PBOT task force, a City-sponsored summit to rally the troops, and much more. We even re-named our Bicycle Master Plan to reflect our Platinum aspirations.

In 2008, we did it. We became the first major U.S. city to reach Platinum status. Whether it means anything, whether it made us complacent, or whether we even deserved it is something we still debate; but there’s no denying that simply having it as a goal pushed bicycling forward in Portland.

Will Diamond do the same? That remains entirely up to how we respond.

Learn more about the League’s Bicycle Friendly American program on their website.

Meh. I don’t really care of a certification or award whatever they’re calling it. I’d like to see the full list of tangible benefits of reaching for this carrot. A place on the “world stage”? Seems like private beaurocrats setting “standards”, coming for “inspections” and we’re supposed to incorporate that into our collective conscience? Ppppfffftttt.

Whatever motivates improvements is ok by me.

Our Sunday Parways events, Safe Routes to Schools programs, and cultural activities (Pedalpalooza, Filmed By Bike, Bunny on a Bike, Tweed Ride, Kidacle Mass, etc) are a great way to help build a movement to apply pressure to the city to build out the Bicycle Master Plan. If we just built it out, the numbers would swing and we would be competitive with the great bicycle cities of the world. It’s time to make that bold jump. We shouldn’t have received platinum status when we did. I hope our city council does prioritize makin the change needed to become a diamond status city before the next ten years. I don’t see it happening with our current local administration. Can we get folks from AROW elected now?

…would they “de-annex” sections of the City that do not politically support multimodal facilities or cannot be rebuilt to be Copenhagen level bike friendly? Sometimes it is better just to get smaller. 😉

Awards like this motivate city government. I’m unfailingly amazed at how much so. The opportunity for horn-tooting and political brownie points that national competition presents is very desirable to politicians and career bureaucrats.

Like it or not, we rely on PBOT and Council for our bike infrastructure and policy. If qualifying for the Diamond award means meeting some set of real measurable standards, then yay, go for it, City.

I would prefer that our government make it illegal to hurt and kill vulnerable road users. With measurable consequences. Or at least make it illegal not to enforce the laws that we have now.

Public satisfaction should be LOW to qualify! A city should be striving to do better, and if the people are satisfied, there isn’t the pressure to improve.