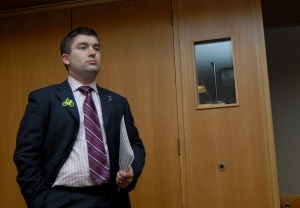 A bill in the legislature seeks to amend the Oregon Constitution in order to use gas taxes and motor vehicle fees to pay for biking, walking, transit and other types of projects. Gas tax and vehicle fee revenues — a.k.a. the highway trust fund — accounts for over one-third of ODOT’s total annual revenue; but it can only be spent in state highway right-of-way.

House Joint Resolution 9, drafted by Representative Jules Bailey (D-Portland), would do what many insiders have long thought to be impossible: open up the list project types eligible for this huge pot of funding to non-auto modes.

Specifically, the bill proposes a constitutional amendment that would, “allow revenue from taxes on motor vehicle fuel and ownership, operation or use of motor vehicles to be used for transportation projects that will prevent or reduce pollution and congestion created by use of motor vehicles.” The bill also broadens the definition of “transportation project” to include, “transit, rail and aviation capital infrastructure, bicycle and pedestrian paths, bridges and ways, and other projects that facilitate the transportation of materials, animals or people.”

Bicycle Transportation Alliance Advocacy Director Gerik Kransky learned about the bill today and said via Twitter it would be “a game changer.” “It would break open the highway trust fund for projects like N Portland Greenway and other trails!,” he wrote to a local transportation activism email list, “I think we all have a strong interest in seeing it pass, but it has an uphill battle in Salem.”

The BTA and other bike advocacy groups have long dreamed of having access to the highway trust fund. In the 2011-2013 biennium, ODOT took in about $1.2 billion in gas taxes and assorted vehicle fees. According to ODOT, the State Highway Trust Fund accounts for 67 percent of the agency’s annual revenue. In 2009, the legislature used this money to fund a package of highway projects worth about $900 million while biking and walking projects continue to fight over budget crumbs.

Rail, aviation, and marine infrastructure projects are also ineligible for highway trust fund monies; but since 2005 they’ve benefited from the Connect Oregon program which sets aside State Lottery funds to to the tune of about $100 million per year. (Currently, bike projects aren’t eligible for Connect Oregon funding, but there’s an effort to change that as well).

While this bill excites active transportation advocates, to say making changes to the highway trust fund is an “uphill battle” is a major understatement.

In an interview in May 2012, ODOT Director Matt Garrett said any attempt at “busting the highway trust fund” would be a “very bloody and unproductive battle.”

Well it appears that Rep. Bailey is ready for that battle. In a statement today, he shared with us that the bill, “Simply acknowledges that we can more effectively manage our transportation system by using transportation dollars not just for projects built for cars, but also for projects that reduce the need for cars.”

HJR 9, says Rep. Bailey, “acknowledges the effect of automobiles on pollution, and would allow revenues to be used to reduce carbon pollution rather than building more roads. This is about giving people more transportation options.” (It’s worth noting that Rep. Bailey voted in support of the Columbia River Crossing bill last month and that’s a project that will very likely increase pollution and congestion.)

While the politics of this bill are bleak to say the least, the policy itself has merit. Even Director Garrett says he’s leading an evolution at his agency toward a less highway-centric outlook. In that May interview, I pushed Garrett to consider breaking free of existing funding constraints.

What if you could cut the strings attached to these dollars? I asked. To that he replied;

“If I could get rid of the strings, what I would suggest is, let’s focus on outcomes… If we can agree that the outcome of this investment is X, and you allow me the local flexibility to do that, I will get you to this outcome. But don’t bind me by saying, ‘With this dollar you have to spend it in this specific area’. Instead, say, ‘With this dollar, you have to meet this outcome’… I think that would be healthier for the system and it certainly would allow each state to tailor their transportation portfolio to truly represent the need of its citizens.

Just think how much money we could leverage if we put all of the money in the bank and said, ‘Let’s look at this and see what we can do.'”

HJR 9 is set for a public hearing in front of the House Committee on Transportation and Economic Development on April 1st. Learn more about the bill and follow its progress, here.

FWIW, this is the third time Bailey has tried a bill like this… so I don’t see this as a “payoff”.

When I work on long-term campaigns like this one, I try to use the following guidance. It was written with federal policy makers in mind, but the basics remain true at the state level.

We can build support for something as massive as this constitutional amendment by building working relationships with elected leaders.

Somehow your “tips” fall a little flat in light of the BTA’s embarrassing CRC fail. But thanks anyways.

If the BTA had chosen to use the hundreds of thousands of dollars it takes in each year to wage a “long term campaign” against the CRC years ago, we wouldn’t be having this conversation today. To say they failed implies they tried. They sat on their hands praising their “relationships” with elected officials. Good strategy there, BTA.

We all know you’re a supporter of the CRC freeway mega-expansion. I’ll be sure sure to send you this link when the CRC dies in the Washington senate.

There is no such thing as an Oregon ” Highway Trust Fund.” There is an ODOT “Budget.” It can be found at http://www.oregon.gov/ODOT/COMM/docs/budgetbooklet_11-13.pdf

that’s good, because I was going to suggest they change the name of it at the same time this bill goes into effect…

This doesn’t make up for the “yea” vote on the CRC. Tilting at this windmill does not win back my support.

Agreed – nor does it make up for ignoring my e-mail (I’m one of his constituents) asking him to present his reasoning for voting for the CRC.

Yep. He ignored mine too.

ODOT spends the money pretty much in the same year it receives it. The Feds, however, accumulated money in excess of expenditures for many years and put in the Highway Trust Fund. That was essentially a savings account – a big pot of unexpended highway funds. For the last 20 years Federal expenditures from the Highway Trust Fund have exceeded revenues so the Trust Fund is heading toward zero. That will put the Feds on the same basis as Oregon – a pay as you go budget.

I’d love to see us get some more $$$ to give us other options to driving from A to B. I hope this goes through.

Yep studded tires again. I tried to get Jules to endorse the campaign to ban studded tires, never a response. In this economy saving money is very virtuous, we could free up millions of dollars not wasting them fixing the ruts caused from the 16% of drivers that use studded tires. The Transportation Committee couldn’t muster the courage to fee studded tires $10. They decided that they needed another study, so nothing is going to be done for years. Every study that has been done has been shelved because Les Schwab didn’t like the results. Which I suspect they won’t like the results of any study.
Remember to Boycott Les Schwab and tell them you don’t like them influencing the legislators. Their refusal to tax themselves for the privilege to sell a product that obviously ruins OUR roads, is corporate welfare. And adds hugely to Green House Gas emissions!

Telling a corporation (which really shouldn’t have the same rights as humans do in a democracy) that you don’t like their attempts to sway electeds is a far cry from telling them they don’t have the right to do so, which is not what Jeff B wrote.

I misspoke in mentioning their “rights” and I certainly did not intend to debate Citizen’s United. My point was that business owners and corporate managers need to work with and communicate their needs and concerns to our representatives. That should be balanced by whatever opposition there is, voicing their needs as well. Telling a business owner that you don’t like them speaking with our representatives (i.e. influencing them), is wrong. I mean, you have the right to say it, but it doesn’t change the fact that they should do so.

As much as I would love more bike paths and trails I can’t help but think this is not right. We all pay taxes on our gas to maintain the roadways for cars and although I do own and use my car regularly not all automotive owners own bikes I feel it would be a misuse of funds to use the money from gas taxes on bike paths and more sidewalks maybe it could justify additional bike lanes on the roadways where no modification is needed but that’s all.

I disagree. My wife and I have no kids but we still pay a hefty property tax that goes towards funding schools. Of course I benefit from an economy that educates its population and I’m 100% supportive of it. Similarly, drivers derive benefits from people taking their bicycles, as in reduced congestion on the roads, less competition for parking downtown, reduced maintenance requirements on the road (esp. when you compare bicycle road wear with someone using studded tires or driving a heavy SUV, or both), etc. We all pay plenty of taxes for things we don’t use directly, but that doesn’t constitute a misuse of funds.

I get where you’re coming from. But, the roads are the public right-of-way, owned by us all, not just those who drive cars. Yet, due to short-sighted public policy, the public ROW has been developed in a manner that precludes the use of other modes, or makes their use dangerous or highly inconvenient. In that light, I think it’s highly appropriate to use gas tax revenues in a manner that restores balance to the transportation system, in the short term. I think a better long-range strategy is to develop a means of taxation for transportation that better reflects what we want, a balanced, multi-modal that allocates costs based on a principle of encouraging what we want, and discouraging what we don’t want.

This would be a welcome change, particularly if it were coupled with an increase in the gas tax.