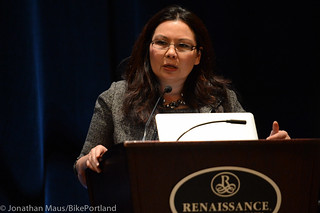 Illinois Congresswoman Tammy Duckworth inspired the lunch crowd at the National Women’s Bicycling Forum today. Rep. Duckworth isn’t well-known in the bicycle advocacy world, but as a double amputee and Iraq war veteran who also enjoys riding a hand cycle, no one in this room will soon forget her story.

Rep. Duckworth, a helicopter pilot in the Iraq War who suffered major wounds in combat, shared with the crowd that bicycling is her “avenue forward.” When you’re out pumping pedals on the bike, she said, “You feel powerful, you feel strong, you feel in command of something again.” From someone who lost both of her legs and suffered damage to one of her arms, those words are a testament to bicycling.

With her $5,000 hand cycle she received from the Veteran’s Administration, Duckworth said she’s experienced the freedom and shared experience that many of us take for granted. Bicycling, she said, is a great “leveler.” 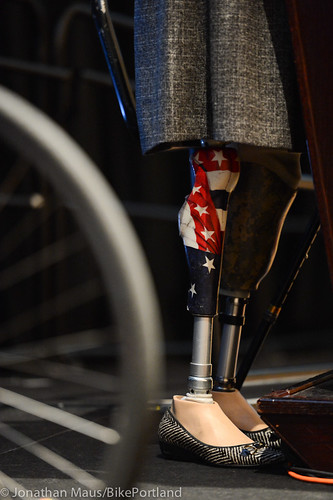 Duckworth thanked the advocates in the room for their work in making America more bike-friendly, but she also urged that they should do more to be inclusive to those with disabilities. “There are still barriers,” she explained, and then told a story about wanting to go to some local bike shops in Washington DC that weren’t wheelchair accessible. “For lack of a $50 plywood ramp, shops are missing out on customers.” She expanded on that perspective by urging bike groups to remember people in their communities that are veterans and/or have disabilities. “Bring those veterans into your bike clubs,” she said. “There are a lot of VFW and Legion posts that are looking for service projects… Work with them on a bike trail project to make it have disabled access.’

Duckworth’s main theme was that bringing veterans and disabled riders into the fold is about looking out for one another. “A lot of this is about community,” she said, “If you’re constantly being dropped [on group rides], you’re going to drop out of the cycling lifestyle.”

BikePortland’s coverage from the National Bike Summit in Washington D.C. is made possible by Planet Bike. Major thanks also goes to Pro Photo Supply.

Thank you, Ms. Duckworth, for your service and for allowing us to know your story. And thank you, Jonathan, for providing coverage from the bike summit. Looking forward to it.

That woman is awesome.

My dad has met her once or twice. Speaks very highly her…..and that is coming from a veteran of the Normandy invasion (with a purple heart).

What a great story! Thanks for bringing it to us. I hope our planners and designers keep this perspective in mind when developing our infrastructure. I am thinking of the Waud Bluff trail that is about to open, and what a missed opportunity that was to serve active people with disabilities.

Interesting story. The timing is nice since our city is talking about diverting money set aside for ADA curb ramps so we can do more paving.

I greatly admire Tammy Duckworth. I’m grateful for her service and her sacrifice, and I appreciate her continued work in the public sector. What a great choice as a speaker for this event!

What an incredibly inspirational woman. She is spot on when she says that if you are constantly being dropped, eventually you will drop out. Thank you so much for sharing her story.