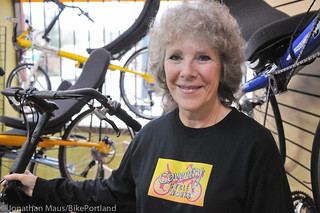 It sure was nice to see the beaming smile back on Coventry Cycle Works’ owner Marilyn Hayward’s face this morning. That smile — and the spirit behind it — was a far cry from where she was just six months ago. On August 6th Marilyn was involved in a collision while riding her recumbent that sent her flying twenty feet in the air. Her fall was stopped when her head slammed against a curb.

Marilyn, 63, suffered a traumatic brain injury. She was unconscious for over a day and spent a month in the hospital. Thankfully, her brain injury was not severe and she’s made a nearly full recovery. “I was very fortunate,” she told me today. “The doctors said if I wasn’t wearing my helmet it’s for certain I would be dead.”

Marilyn is now back in the shop every day, managing her staff and keeping her business strong. A former computer programmer for Fred Meyer, Inc. and record-holding endurance cyclist for her age and gender, Marilyn has had to work to regain many skills she once took for granted. Her recovery was marked by frustration at what used to be simple tasks. “I beat the heck out of the telephone when it didn’t do what I thought it should do,” she said, “Almost broke my hand. Then I had a moment of clarity.”

Today, she’s back to being sharp as a tack. The only way you can tell she suffered a serious injury is by her slightly slurred speech and the occasional clearing of her throat due to scar tissue that formed when a tube was stuck down it by first responders.

Doctors told Marilyn she might never have the balance to ride a bike again. She dispensed with that by riding her bike twice in the past two months. She still doesn’t ride regularly and she’s handling that part of her recovery slowly; but you cannot keep this woman off her bike. You also can’t keep her from working.

Marilyn shared big news on that front: She signed a lease on a new shop in Beaverton yesterday. The new shop will be called Coventry Cycle Works West while her existing shop on Hawthorne will become Coventry Cycle Works East. Marilyn said she’s had her eye on the space at 8354 Hall Blvd for over four years and the pieces finally came together to turn it into a bike shop. “I’ve been dreaming about this location for years,” she said. The new shop will be near Washington Square Mall, Highway 217 and the WES commuter rail station. But the most exciting aspect of the location is that it’s right on the Fanno Creek Trail which Marilyn happily pointed out, “Will be perfect for test rides.”

Coventry Cycle Works West will be a recumbent and trike specialty shop that Marilyn is sure will appeal to the “techie crowd” that works at Intel and Nike. Already known as a top recumbent dealer, Marilyn says many of her customers from the West Side don’t want to drive into Portland. “It’s a foreign environment to them,” she said.

The opening date for the new shop is set for March 15th.

That is GREAT news. So happy to hear Marilyn’s recovery is going so well, and absolutely thrilled that Coventry will have a location in Beaverton. I don’t ride a recumbent (yet), but Coventry has been great to work with when I have had issues with my Bike Friday folder. Both types of bikes share a lot of unique features like small wheels and unique ways to configure components.

The new shop will be near Washington Square Mall, Highway 217 and a MAX light rail station.

Hmmm… according to Google, the WES station at Hall & Nimbus is 0.3 miles away. I agree with you about MAX- the Beaverton station is 3 miles.

Busses also run every 15 minutes on Hall Blvd between Washington Square and Beaverton Transit during most parts of the day.

“…But the most exciting aspect of the location is that it’s right on the Fanno Creek Trail which Marilyn happily pointed out, “Will be perfect for test rides.” …” maus/bikeportland

Being right on the Fanno Creek Trail is choice. 8354 Hall would seem to be close to where Albertson’s is at 8155 Hall blvd and Greenway. Lots of activity at that location. The park is a refuge from Hall’s traffic. The bent shop’s location will be an attractive diversion for people riding in the park, coming from Beaverton or Tigard.

Big congratulations to Marilyn! I visited Coventry a few weeks ago, and was very pleased to see the sparkle back in her eyes.
One can intuitively assess a brain injured person by their eyes – you just kind of ‘know’ if they are not who they used to be, but Marilyn is back!!

This is fantastic news. Marilyn is a much needed part of the local bike scene.

I’m in Seattle, and hadn’t heard about her injury – sorry to learn of it, but glad to hear she’s doing better. I bought a bike from her a couple of years ago, and she impressed me as a particularly good and helpful bike shop owner.

Heard about your crash from Tom. Happy to know you’re back!
Jerry Rooney
Corvallis

So happy that Marilyn is ok and congratulations on her new West side shop!

It is great to be alive- WEAR YOUR HELMETS!!!

Two real morals of her story are 1) helmets do occasionally do the job they’re supposed to so no making fun of those who wear them at all times, and 2) Washington County, ODOT, and the various cities need to make riding a bicycle much much much safer along Highway 10/TV Highway; it’s pretty disgusting the lack of a safer connection between Hillsboro & Cornelious.

Hoping that the new location has a little more space, maybe enough for a Kett demo ride?

Awesome! Keep on keeping on!

This is a very inspirational story. Great to hear Marilyn is back in business and going strong. Just shows what can be achieved with strength, drive and determination.

Way to go, Marilyn! I am so glad you are recovering well! HELMETS SAVE LIVES!!!!