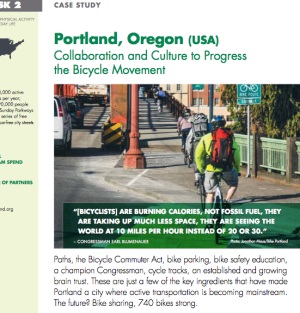 From Designed to Move report.

A new report compiled and presented by Nike Inc., the American College of Sports Medicine and the International Council of Sport Science and Physical Education at this week’s Clinton Global Initiative meeting, includes bicycle transportation as one of the key solutions to combat the world’s “urgent” physical inactivity crisis.

The report, titled Designed to Move: A Physical Activity Action Agenda, highlights six efforts from around the world that “are literally changing the way people move throughout daily life.” One of those six is how Portland has used “collaboration and culture to progress the bicycle movement.” In addition to the prominent role bicycling plays, the report also provides advocates a powerful new set of talking points.

As for Portland’s starring role, here’s an excerpt from report*:

Government, urban design, transportation, corporate, education, health care and civic engagement sectors have worked together. Strong support was received from local businesses/employers, schools and parents advocating for safe routes. The public transit system’s (TriMet) bike-supportive policies allow bikes on all buses and rail cars, and the digital/IT sector also innovated ways to provide quick access to active transportation information and tools. Theintertwine.org provides tools for residents to connect with nature. Bikeportland.org has become a powerful source and voice of all things bicycling including a popular ‘Monday Roundup’ which features news from the industry, traffic laws, events and advocacy.

The ‘bike movement’ in Portland can be traced back to the early 1970s… Over the years, coordinated efforts created both the ‘hardware’ and ‘software’ needed to advance Portland to a city known for its bike-friendly infrastructure. The reputation the city has developed around bicycling has attracted a strong brain trust of academics, with critical research coming out of Portland State University.

Beyond a mention of Portland (and Portland biking photos sprinkled throughout it), the report (PDF here) is significant for other reasons. I think it’s a good lesson for bike advocates on how to raise the profile of an issue, develop compelling messages and images, get people excited to do something, and then give them the tools to do it. 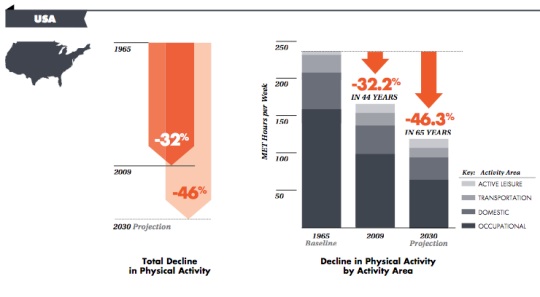 In addition to the quality of the report (it contains lots of good infographics and stats), I was happy to see bicycle transportation (not cycling as a sport) mentioned several times.

After detailing the huge economic and health-related costs of growing rates of physical inactivity around the world, the reports contains two “Asks”: 1) Create Early Positive Experiences for Children and 2) Integrate Physical Activity Into Everyday Life. It’s easy to see how bicycling can and should play a role in both of those; and thankfully, the report’s authors clearly respect that role (instead of ignore or minimize it like I see so often in high-level documents like this).

“Transportation policy provides one of the single most important ways to get people physically active. Whether it’s mandating bike lanes and sidewalks or providing vouchers to low-income children so they can access options for sports and physical play, these policies just might be the difference-makers.”

Under the “policy considerations” heading, the report says bicycle parking should be located near all transportation hubs, “complete streets” should be supported, streets should be traffic-calmed, and that there should be “zero tolerance” for anything that makes a transportation system “unsafe or uncomfortable for any group, especially women and girls traveling alone.”

As examples to learn from, the report cites, “Closing off streets or calming traffic for physical activity,” as a “Quick win” and includes a spotlight on Denmark’s Cycle Super Highways. Safe Routes to Schools programs are given their due as well.

The report is definitely worth a look. Check it out and learn more at DesignedToMove.org.

*Disclosure: Nike contacted me in the course of developing the Portland case study. I spoke with them about my perspective on bicycling here and I also ended up licensing several of my photographs to them for use in the report.

although diet is more effective when fighting obesity than activity is, it’ll be easier to force more people into alternative transportation since the most fattening forms of transport are regulated by the government…

it would take a monumental effort to get capitalistic food companies to stop selling their cheap junk to us, so the government is forced to take the only action it can and make sitting around in a car that much less appealing…

The government will spend far more time and money pandering to the insurance lobbies by trying to socialize health care (thus spreading the payment thereof farther and wider) than it will trying to discourage automobile use.

However, studies seem to indicate that it is physical activity that leads to improved health and less risk of disease so for health outcomes, being active is more important that lower weights.

Especially since the USDA is in the business of promoting that cheap junk (they subsidize corn and dairy heavily, resulting in a huge surplus. Corn is in almost everything (check the ingredient list), as they had to find ways to use it.

“Transportation policy provides one of the single most important ways to get people physically active.”

If only the public viewed it that way. Unfortunately so many people don’t want to be ‘forced’ to become physically active; and they see policy as a threat. In addition this polarization of transportation policy with ‘liberal’ think-tanks makes it challenging to separate policy from politics, sadly. Not that I disagree with any of the findings here, I just view it as more preaching to the choir. Great photography though! 🙂

Portland’s reputation as a great cycling city is a testament to the power of marketing…or maybe just underscores the abysmal state of affairs in other parts of the country.

On an international basis, Portland is below average…having lived in Japan and bike toured all over East and SE Asia, Portland has more bike lanes than some of those places, but drivers there are much more willing to share the road and Japan in particular is well set up to cater to large numbers of cyclists. Ever seen a Japanese bike parking facility at a train station? http://www.youtube.com/watch?v=zRLw62yWe6I

We will never see that level of support in Portland.

If we had one of those here, there would be an article on BikePortland full of people complaining that their cargo, longtail, or custom bike doesn’t fit.

Anytime we spend more time exercising whether biking, walking, jogging or skateboarding, it’s a good thing. I have lived in Portland all my life. As a kid, I was always on my bike. At 61, I tend to walk or jog and weight train on a regular basis. Biking in Portland is popular but is more seasonal. It drizzles in Portland for about nine months out of the year. All but the most diehard riders seem to disappear until drier weather returns. Most bike lanes rarely see a rider in the dark fall and winter months. Portland is really more of a walking town than it is a bike town. So far as fitness goes, we had a visit by Dr. Oz this past summer. They did a random check up on Portland residents. Sad to say, we didn’t fair so well. I think they found that about 43% were obese. Like others have said, diet is probably more important if we are to change our health for the better. Keep walking though, every little bit helps.

“All but the most diehard riders seem to disappear until drier weather returns. Most bike lanes rarely see a rider in the dark fall and winter months.”

I would disagree with that statement. Ridership certainly declines in winter, but not by much more than half IMO.

Even out in Beaverton where I work, I still see enough other riders in December, January and February that I wouldn’t characterize the use of any bike lane as “rare”.