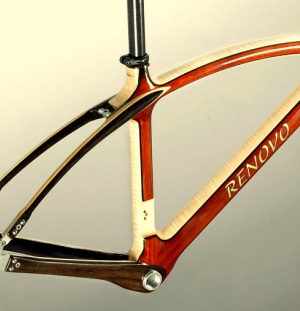 Renovo Hardwood Bicycles, a bike manufacturing company located in inner southeast Portland, was broken into over the weekend. Four of their high-end frames with a total retail value of $13,900 were stolen. Now the company is offering $2,000 in rewards for information on the thieves and the return of the frames.

Employee Drew Nasto says the thieves were pretty clumsy. First they attempted to scramble up over a roll-up door via a ladder, table, and two stacked garbage bins — only to realize there was no ladder on the other side. After they aborted that attempt, Nasto says they used a shovel to pry off a door handle to enter the building. The alarm sounded immediately, “which gave them only enough time to grab four finished frames from a rack by the door and run,” he shared.

Nasto says they’ll give $1,000 to anyone who offers information that leads to the arrest of the thieves and another $1,000 for the frames.

Renovo’s bikes are very unique and made of exotic hardwoods. Nasto sent over descriptions of the four bikes:

Here are a couple more frame photos that Nasto says are similar to the ones stolen (note, only frames were taken, not complete bikes): 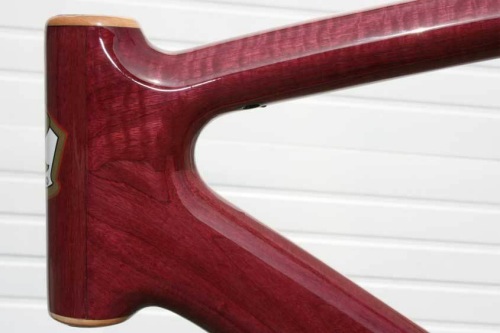 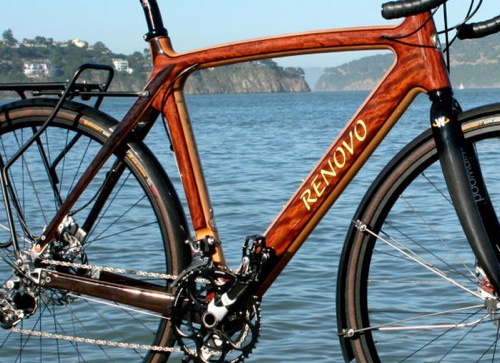 Please keep your eyes peeled and contact Renovo if you have any information.

Very sad indeed. I do hope the culprits are caught. I also believe that there is a special place in hell for bicycle thieves.

What beautiful frames! Those will not be easy to hide. It’s not as if they took standard mass produced frames. These will stand out in any crowd.

Now I want one!

If I was dirty, rotten, misanthropic cynic I’d say that this is a cost effective marketing campaign.
As it is I’m not quite so cynical as to expect that a shrewd business owner/artisan would dream up such a convoluted PR scheme but fail to take in to account what the absence of a physical product example would do to future sales.

Those frames look too pretty to ride; I can’t imagine that these will be an easy sell in a non-bike centric market. I’d be like trying to fence the Mona Lisa:)

It wasn’t a marketing campaign. My son ordered his bike almost 9 mos. ago and just got notice it was finished. He was sent a picture of the frame with the serial #. It was only going to be a week or so before it was put together and sent to him. Unfortunately his was one of the listed bike frames that were stolen

I was not saying that nor do I believe that.
I was saying that it was possible that it could be misconstrued as that.

However, the elaborate planning involved in such a convoluted stunt implies that someone thought this through and if they thought it through they’d realize the lack of the product there trying to drum up PR for would put a severe crimp on the Machiavellian plans to manipulate the public opinion.

Holy crap. That sucks. No WAY these idiots are going to be able to show those to someone who knows anything about bikes without all kinds of mental alarm bells going off.

They used to hang horse thieves.

I am sure the thieves were some down on their luck types just looking to feed their families.

… then steal from a grocery store, maybe?

Tongue was firmly in cheek.

Chris I
Reply to  chucklehead

Yeah specifically their Sister. Or their Horse. Or maybe other relatives like Crystal or even Mary Jane.

They all get pretty hungry…

Terrible. Not only are they clumsy, the thieves are just plain stupid. It’s insulting to be ripped off by people that dumb. Those frames will be extremely difficult to sell without raising suspicion, which raises the odds of them being recovered and the scumbags apprehended.

I looked at their website. They build frames to order, so not only was the company ripped off, but there will be four very unhappy customers out there who have waited patiently for their frames to be finished.

If they were the ones hanging on the wall in their lobby, they were probably samples, not special orders. i would hope.

I forget if this has been posted or not. As the story says, “There’s just no risk to the crime.” I’ll bet these frames are already out of the state.

Hang’ns too good for em

That sucks! Sorry to hear it Drew, I imagine those frames are going to be very hard to keep below the radar for long though.

Must have been woodchucks.

It’s a tough economic time for termites too.

I hate people like this. Thefts like this do nothing but hurt the business and customers, possibly even chasing the business away to a safer town or state.

Anybody check the pirate ship?

Yeah! What’s up with those guys anyway?

was carless
Reply to  Paul

Is anyone concerned that they are using endangered hardwoods in their frames? Wenge is on the IUCN Red List, doesn’t seem like Portland values.

Was thinking the same thing. Maybe Tre Arrow is back in town…

Man- this was a remarkably stupid caper. Eco-concerns aside, these frames are so rare & distinctive that the perps will have a hard time fencing the hardwood! Will they fence them to rich beavers? Very well-to-do termites?

We need to cross state stolen bike APB system where anyone can put in serial numbers and description of your stolen bike and geographically spreads the message of what bikes to be on the lookout for.

I mean, we here are all aware of this theft but if it is to be sold it will be somewhere no one is aware of this story.
Optimally there needs to be an automated way to auto forward a standardized format of bike info so that any buyer can browse it for stolen bikes to look out for as easily as Craigslist, easier even.
Then the police in a city far enough away to feel safe to thieves can simply forward the APB to local bike shop owners and associations so they can help spread the word..

I hope they build it up, ride it hard, crash, and then splintered to death.

This is yet another fine example of why businesses should invest in CCTV systems.

I have seen some comments in appallingly bad taste over the years, but this takes the cake. When has a break-in to a local bike shop, let alone a break-in into the shop of the most innovative bike builders in Portland been met with snide comments about marketing ploys and questions about the materials? Are we complaining about the energy requirements for steel, carbon and aluminum frames when A Better Cycle was broken into in May? The sweatshop labor making imports?

I was thinking the same thing…only in Portland…

The thieves were either really smart guys who already had a plan on how to move these frames since they won’t be able to just sell them on craig’s list or eBay. Or else, the more likely story is they’re really dumb and now they have some high end bike frames they can’t do anything with.

These frames have probably been covered with spray paint already.

I am a police officer in Australia, and looking at the MO of this break and enter I’m leaning towards the spray paint theory too. Only crooks this dumb would first carry out the crime this way, target such a unique product ( beautiful too) and as much as it breaks my heart will spray it with Matt black aerosol and flog it for an eight ball of crack. Some drugged out idiot is currently riding the best made Matt black wooden bike in the world with a parts list that would make any real cyclists cringe !
I stumbled on this while researching the Renovo I want to buy.
Feed them to the crocs! ( or your little alligators will do LOL )

Noting here, five year later: two of these frames were recovered by PPB Bike Theft task force officers after the bikes were listed on Offerup. See this tweet: https://twitter.com/PPBBikeTheft/status/1060716765443842048

Wow! Thanks for all that you contribute to the bike community.