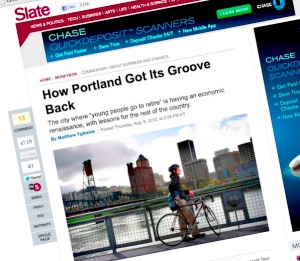 It’s sort of a running national joke that while Portland might have its perks (great coffee, beer, biking, food, independent businesses, natural areas, and so on), our economy isn’t much to brag about. Portlandia’s “Where young people go to retire” joke was the punchline heard ’round the world.

But what if we turned all that great stuff into a foundation for a healthy local economy? Well, according to Slate Magazine’s “Moneybox” blogger and commentator Matthew Yglesias, who visited Portland last week, we have. In a blog post today titled, How Portland Got Its Groove Back: The city where “young people go to retire” is having an economic renaissance, with lessons for the rest of the country, Yglesias takes a close look at current economic indicators and determines that Portland is “now doing fine.”

Not only does Yglesias’s article feature a person on a bike in the lead photo, he directly includes our local bike industry and general bike-friendliness as one of the key reasons we’ve rebounded. Here’s an excerpt:

“So what went right? To an extent, Portland’s benefited from the fact that some of its local enthusiasms—bicycles, food trucks, microbrews, artisanal whatnot—have become more popular nationally, giving a boost to some growing local companies* [Yglesias linked this text to a BikePortland article about our healthy bike manufacturing sector]. The Portland area has also benefited from the region’s green proclivities. Renewable energy has been a growth industry nationwide, and Portland is home to the North American base of Germany’s SolarWorld and Denmark’s Vestas, one of the world’s largest wind-turbine manufacturers.”

On a related note, President Obama made remarks during a speech in Colorado today that he’d like to boost American manufacturing by giving the same treatment to other industries that he gave to the auto industry. Like I said before, American’s bike makers are poised for a boost of “insourcing.”

America’s bike riding renaissance is already here and growing stronger by the day. We used to make bikes in the country that supplied the world 100 years ago (before cars took over). The auto industry on the other hand, was hurting before Obama lended the golden hand, and driving is on the decline. Isn’t now a perfect time for strategic investments in American bike manufacturing? We’ve already got our groove going here in Portland and I’m sure we’d be happy to be first in line.

With global energy prices driving up the cost of imports to the USA we find a gradual increase in goods made here.
Petrochemical prices will continue to rise,
Copper availability is waning as global mine stocks are depleted while the technological revolution and green energy push further increase demand for limited copped supplies.
Necessary Rare Earth minerals used in all sorts of computer and electical systems are almost exclusively supplied by China.

What in an average bicycle can we not make here in the USA if import costs suddenly went up by a factor of 10?
Iron, aluminum, titanium, carbon fiber, welding, even tires and plastics for bicycles are relatively small consumers of native mineral resources.
The amount used in manufacturing a bicycle produces a much higher valie product for the amount of materials and labor used versus an automobile.
Further, everything on a bicycle that can be produced in the USA without major retooling of factories or creation of new industires.

doubt it… ever been to a facility that manufacturers tires, fenders, grips, etc in china/taiwan? And beyond bike parts- Why are Iphones still made in China? What happens there can’t be done here, unless the price of said components goes up 25-45%.. Not to mention those unskilled labor jobs would pay a very unsustainable minimum wage here in the good ol USA. American Economic boost from cycling? Nah. Remove your head from the sand and gain some perspective.

Actually, the reason iPhones are made in China has little (but not nothing) to do with the price of labor today. It has to do with supply-chain lock-in — the network of component suppliers and competing manufacturing companies that has sprung up in the past ten years or so in China. In a market that rewards innovation and rapid market introduction, having many parts of the supply chain in close proximity is a huge advantage. The irony is that the US had this advantage for so long, and allowed our manufacturing to stay here for years after cheaper labor sources appeared in the rest of the world. Ridiculous tax policies that rewarded companies for outsourcing caused our lock-in to collapse, and allowed other regions to develop their own lock-in.

Portland’s bike economy is diverse, competitive, and attracting skilled workers to locate here. It’s exactly the sort of lock-in that boosts an industry in a given region. The problem is that it’s mostly in the high end, and not serving the high volume market as much. If we had the kind of government support that routinely goes to other industries in the form of subsidies, loans, and favorable tax policies (and by that I don’t mean simply lower taxes for everyone), we could easily become a center of high volume bicycle manufacture.

Iphones are assembled in China – key parts are made elsewhere

17.4% unemployment and a high cost of living for a low standard of living, especially when compared to similarly sized cities, says Slate doesn’t know what it’s talking about.

Come on now. Picking the highest number for unemployment, and not mentioning the national average for that measure is 15.3%. Providing the link is nice though.

Chris I
Reply to  Paul Johnson

Your link doesn’t mention cost of living. How is it defined? Are commuting costs included?

Ohhhh, media. How I love your glib oversimplified narratives! Life is a bit more complex than all this. People know that, right? Still, I suppose it’s nice of them to let us know that the made-up doldrums are now officially pretend-over!

The media DIDN’T oversimplify the narrative, Jonathan did. Yglesias didn’t say that bikes were one of the “key reasons we’ve rebounded” at all. In fact, the paragraph after the one Jonathan quoted says:

“But attributing Portland’s recent success to its unique nature is probably just as misleading as was the tendency to do the reverse a decade ago.”

And in the conclusion he says:

“That the slow, boring work of improving a local area’s educational attainment is the best path to prosperity is rarely what people want to hear—Portland Mayor Sam Adams, to his credit, has put a lot of emphasis on reducing the city’s dropout rate—but it’s what the data show. Different kinds of urban planning fads come and go, and different local industry mixes are sometimes beneficial at different times. But over the long term, cities are first and foremost made up of people. The cities with large numbers of skilled workers will either attract employers from outside or else lay the groundwork for homegrown success.”

So either Jonathan misunderstood the point of the article, or he purposely misrepresented the article. It’s really, really shoddy journalism either way.

Compare Portland to other like-sized cities in the US that are doing better and what you see is they have a major research university, we don’t. For the last 20 years Oregon has reduced funding for its universities year after year, and it shows. Despite great efforts by PSU to fill the gap, our only major research institution is OHSU, and its focus is limited compared to U of WA in Seattle, UC Berkeley in the Bay Area, U of Minn in the Twin Cities, etc. Innovation rules the day in an advanced economy, especially in manufacturing where we cannot compete on price.
That said, biking and our bike culture does two things: helps attract young people who get their education elsewhere (but our natural setting does most of this too), and diverts serious dollars away from imported hydo carbon fuels to locally produced products (including human fuel like food, beer, etc.) Jane Jacobs in “Cities and the Wealth of Nations” would call this “import replacement,” a key to a city’s prosperity.

Lenny is right, unfortunately. Yglesias’s article is very poorly researched. You can see this yourself by going to the root URL for his graphic, http://research.stlouisfed.org/, selecting the civilian unemployment rate, set the time period to one decade. Add in Portland and you’ve reproduced Yglesias’s graphic.

Our “recent success” is apparently based on a six month trend. But it gets worse–add a few more cities–Salt Lake, Seattle, Austin.

Ouch. If unemployment double our urban competitors is “getting our groove back,” it’s a pretty lousy song.