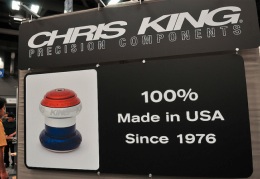 President Barack Obama made headlines yesterday as he announced a new effort to re-ignite America’s manufacturing base by hiring from within — within the United States that is.

Obama, with Oregon Governor John Kitzhaber and CEO of locally based Keen Footwear by his side, talked up “insourcing” (as opposed to outsourcing, get it?) and laid out several measures to help make it happen. The new initiative seems tailor-made to give a much-needed bump to Portland’s flourishing bike industry. 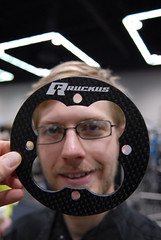 Each of these companies (and this is just a sampling) have potential to grow their business — and vastly improve our quality of life while doing so — by manufacturing bikes and bike-related products right here in our backyard. 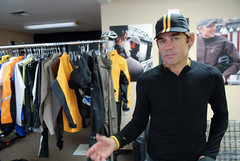 Chris King Precision Components leads the way. The company has grown by leaps and bounds since moving to Portland in 2003. They’ve tapped into our city’s deep reserve of bike talent to find quality employees and now boast a staff of 94 people that do everything from marketing and sales to operating industrial, computer-controlled machines and other heavy equipment. One of King’s biggest bright spots has been international exports of their famed headsets and hubs to countries like Japan and Germany.

We’ll be hearing a lot more from Chris King Precision Components in the future. At the moment, they’re actively lobbying mayoral candidates on their “bikes mean business” platform.

While King already has a foothold in manufacturing, other companies like Showers Pass and Portland Design Works have a mature product line, strong national brand awareness, and highly developed sales channels. They currently have products made overseas — but like Keen Footwear, who makes the vast majority of their shoes overseas but has recently opened a small factory on Swan Island in Portland, there could be opportunities to produce some products locally. 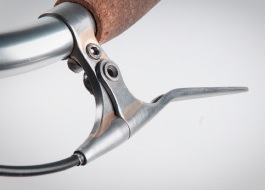 Speaking of producing products locally, another big “x” factor in Portland are the brilliant bike minds and entrepreneurs making top-notch products and innovating existing ones in small shops throughout the city. Shawn Small at Ruckus Components has established himself as a respected expert in carbon fiber. His small but busy shop repairs carbon fiber frames and parts sent to him from all over the country. He also makes chainguards, and is perfecting a line of carbon fiber fenders that could become his break-out product.

Jordan Hufnagel of Hufnagel Cycles is a framebuilder who has begun making components himself. Check out these photos from his shop of his hand-made skewers, brake levers, and more.

From garage innovators to mature companies, marketers to machinists, Portland already has several of the crucial building blocks of bike industry success. Throw in a city known for its biking brand and the myriad health and livability benefits that follows bicycling wherever it goes and you’ve got a complete slam dunk. With more coordination and recognition from local and state governments, the bike industry could follow athletic footwear and craft beer as Oregon’s next big thing.

It’s been three years since Oregon Business Magazine put our “bicycle industrial complex” on its cover. With Obama’s attention, new faces coming to City Council, and an economy that needs a jolt, I can’t think of a better time to build a stronger foundation that will help build our local bike-related manufacturing capabilities.

Let’s make 2012 the year of insourcing in Oregon and let’s not forget about the potential of our home-grown bike industry.

— For more on the potential of bike manufacturing in Portland, listen to this two part interview featuring myself, Bill Stites of Stites Design, Chris Harbert-Erceg of Crank, and the host of Launchpad Radio, Tony Fuentes.

Made in Portland and made in Oregon is pretty great, but I think it’s bigger than that alone. How many builders employ pain shops based in OR? How many use True Temper tubes that are made in the US? Lots. IMO it’s important that we (as business owners) look domestically to source as much as we can. It’s nearly impossible not to use imported items but it’s nice to be able to look at a material stream from start to finish and know it was all made in the US. For one, I’m rather proud of my headset design that allowed King to add another sku, allowed Paragon Machine works and True Temper to add new products to their already solid offerings, prompted Andy Newlands to supply new cutters for the new head tube supply, prompted Anvil bike works to make new parts for his fixtures…and knowing that most of the material used in all those items, from mill to final product, was made in the US.

You make a good point, Sean, it is really a widespread effect, even if the most obvious benefits are here in Oregon. For example, the fabric for Wabi Woolens’ jerseys is made on the East Coast, and while the small volumes make it a drop in the bucket as far as bike jersey sales are concerned, I know the fabric company who makes my fabric has certainly come to appreciate the occasional $25-50K order. And I know I help keep the local sewing contractor and his employees busy sewing bike jerseys. Those are real jobs on both coasts.

I’m still rockin’ an old Klein Adroit from 20 years ago. Made in Chehalis Washington.

Not a great representative for this issue…

Jonathon, whose your state rep or senator? who is Chris King’s? Showers Pass is located in Jules Bailey’s district, i think. getting something before the Gov is difficult, but getting before a state legislator is easy: you just make an appointment. that way, you & these business owners can make them more aware of what the issues you bring up. also, find out who is on various applicable committees; work with your state legislators to get these issues before the chairs/vice-chairs/members.

last year, bakeries brought issues about cookies, crackers & some other products to the House (Commerce?) Ctte. as a result, they got new rules passed they now enables those businesses to expand their product line & grow their businesses. these were not sexy hearings, but they were effective. bike businesses need to take a queue from the bakers for effective legislation that helps them grow.

Might want to be careful in using Keen as a made in the USA company. Beyond that, know a guy well that worked there. Conditions and expectations were unreal. AND…many of the workers are hired through the TEMP agencies rather than hired as long term people. In the warehouse, “people that talk to each other don’t work here” was mentioned by management along with other third world type of treatment.