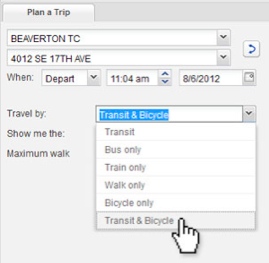 Screen grab of the
trip planner in action.

After 10 months of testing, TriMet has officially moved their multimodal trip planner out of beta mode. Here’s more from their announcement:

Now riders can combine transit with biking and walking using the newest version of the online trip planner. This open source trip planning tool is the first produced by a transit agency in the U.S. that allows users to combine multiple modes of transportation.

TriMet has spent over three years building this tool (which has even been noticed by the White House). Since they launched it to public use back in October, they’ve received help from hundreds of users, says the agency’s IT Manager of GIS and Location-Based Service Bibiana McHugh. I spoke with McHugh on the phone this morning to learn more about what has changed since then.

“It’s a much better tool that it was back in October,” she said.

The major improvement, says McHugh, is that the project team — led by TriMet Software Engineer Frank Purcell — has used feedback from users (many of them bike riders) to refine the core algorithm the tool uses to create its routes. The tool is made up of three basic parts: the core algorithm, free and open source OpenStreetMap data, and what McHugh refers to as “configurations”. Those are the weighting preferences baked into the system that help the tool determine what roads are best for a “quick”, “bike-friendly”, hilly, or flat route, and so on. 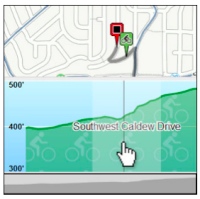 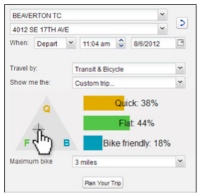 Those configurations can be tweaked in a nifty triangle that allows users to choose how much to weight each feature. “We’ve tweaked those configurations for optimum results,” says McHugh. She also credits the four interns who helped work on the project, saying that bicycling is their main mode of transportation and they did a lot of field work and testing over the past several months.

Another big improvement to TriMet’s planner has to do with the map’s graphical tiles. Before they were using Open Street Map data with tiles owned by Mapquest. After Mapquest went down a few times, McHugh says they didn’t want to be reliant on them. She was also concerned that Mapquest’s tiles might not get updated frequently enough. So now they’ve built their own tiles, which gives TriMet the ability to dial-in the look and feel and keep the data current. “No many people are doing this… It’s a pretty big undertaking,” she explained. “But we thought it was worth it.”

Another big undertaking was getting quality aerial photography for checking out routes in a street view mode. McHugh said, thanks to a consortium of agencies across the region, they were able to purchase “six-inch aerial photography.” The images are extremely detailed and allow the user to see objects as small as six inches in size. “This means you can actually see bike lanes on a street and curb cuts on a crosswalks.”

As for what else this tool can do? It gives you an elevation profile of your route, you can view locations of carsharing services and fare outlets, and you can print out a hard copy of your trip.

McHugh says they hope to expand the tool through the region and bring in other transit agencies like C-TRAN and SMART. Other next steps for the trip planner are to make it more accessible to sight-impaired and low-bandwidth users.

This is such a fantastic tool, but it’s still not the default tool when you go to TriMet.org. I asked McHugh why this is the case. She said they haven’t yet replaced their proprietary, transit-only system because it entails a lot of behind-the-scenes work (for instance, TriMet call takers use that system when people dial customer service). But, she added, “That’s the next thing we’re working on. By next summer the online trip planner will have completely replaced all our proprietary components.”

— Plan a trip for yourself at Ride.TriMet.org and don’t forget to send in feedback if you’ve got it.

A most awesome bonus would be if it could interface with the Car2Go system, those little blue and white rental cars I keep stubbing my toes on around town.

Actually they’ve got a nifty API that lets you keep track of the locations, and we’ve already got some of the basic support in place for this kind of dynamic transport (see our bikeshare system demo in NYC http://cibi.me ). The big issue is just making sure we can give good estimates for travel times via car. We’re working on it!

It already has all the Zipcar locations. There’s a little Zipcar icon at the top left corner of the map.

We (OpenPlans) want to do car2go too! That’s on our feature list for the near future. Stay tuned.

This is great! Any news on when this will be incorporated into the mobile app version? I still only see “Bus or train, Bus only, or Train only” for my travel options on the app.

There’s a Kickstarter campaign to bring OpenTripPlanner to iOS (and beyond). See http://www.kickstarter.com/projects/228865951/transit-app-for-ios-6-and-beyond for details.

Blame C-Tran for not providing their schedules for open source use. Trimet was one of the first cities to do this, and we now have a plethora of options for transit data here.

Also, for those of you that might be concerned about schedule changes come September 2nd, the new schedule is loaded into the system. They have not published the schedule, but you can discover how it might affect your commute by using this new tool.

Of course, if you plan a bike/bus/bike trip like I did, they compute your route, but include this little reminder: “We suggest that you lock your bike before you ride. We have secure bike parking at many stops”. And I guess I’m supposed to have another bike locked up at where I get off the bus? And if I change my route, I’d better get a couple more bikes and lock them up on that route? Or, I could hope that TriMet might actually consider 3-bike racks like they have been using for years in Seattle. Or, change its policy to allow bikes on the bus if there’s room.

Oh man. I have been fantasizing for years about a three-bike bus rack!

I’ve been playing around with it for a while and I’m a huge fan. Don’t forget to keep sending feedback direct to TriMet. No application in the history of the Internet spontaneously materialized perfectly formed at birth (except Robot Unicorn Attack). The six-inch resolution is cool but I see the zoom stops you well before that. Perhaps due to privacy concerns?