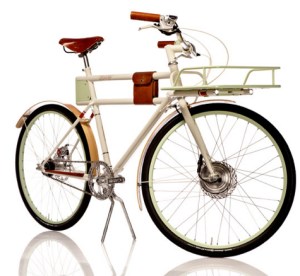 See it in Portland this weekend.

One of the most anticipated new bikes in years, the Faraday Porteur, is headed to Portland this weekend. The bike, which was discovered here on BikePortland when it debuted at the Oregon Manifest Design Challenge competition back in September, boasts a gorgeous design, detachable front rack, hub-powered lights, and a smartly integrated battery for electric assist.

Earlier this month the man behind the bike, Portland native and MIT grad Adam Vollmer announced he planned to mass-produce the bike. Vollmer went to Kickstarter in hopes of raising the $100,000 needed to get the production started. The project quickly reached that goal and now Vollmer and his crew have left the San Francisco Bay Area where the company was founded and are headed up to Portland.

I caught up with Vollmer via email to learn more about his Portland roots, the rise of Faraday, e-bike evangelism, and more…


Do your Portland roots have anything to do with becoming the man behind this new bike brand?

“My Portland roots have a huge part in making this new company a dream of mine. I was fortunate to grow up in a city where biking is a big and viable part of the transportation mix, and I’ve always been excited to try to find ways to spread that elsewhere. Plus, I spent my summers working at the Bike Gallery, volunteered with the BTA, rode Cycle Oregon with my dad…Portland put biking in my blood.” 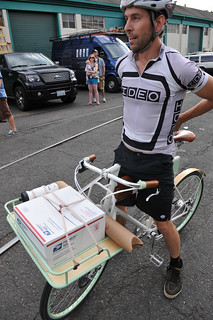 Vollmer on his Faraday at the end of the
Oregon Manifest Design Challenge ride.
(Photo © J. Maus/BikePortland)
Are you surprised by the response to the Faraday thus far?

“I’m blown away by the response to Faraday on Kickstarter. Honestly, it’s terrifying putting something that you’ve worked on so hard for so long out on such a big stage – you’re immediately under the microscope. My team and I had to BELIEVE in this brand new design…but that was no guarantee that everyone else would. But the enthusiasm for the bike – whether it’s from the bike community, the design community, or anywhere else, has been overwhelming. I’m so grateful to all of our backers – especially those who bought one of our first production bikes – for their support. I was unprepared for just how emotional an experience the Kickstarter campaign would be.”

Why’d you decide to make the bikes in the U.S.?

“We decided to make Faraday in the US for a number of reasons. One, we plan to hold Faraday to the highest standard of quality, and the best way for us to do that is to work with a domestic framebuilder who understands our needs and is willing to work closely with us to get the best result possible. Two, we’re a little bit idealistic. I see exciting things on the horizon for manufacturing in the US, and I want to be on the leading edge of that curve, not catching up.”

Do you see yourself as an e-bike evangelist, or is the e-assist just another part of the bike’s utility?

“I see myself as a bike evangelist, and I’m a supporter of anything that gets people out spinning their pedals and having fun – from new bike lanes to new bike products. In the case of e-bikes, I think there’s huge potential to get people riding more, but there need to be products that are easier to fall in love with. With Faraday we’re trying to change that, and I hope more bike makers will follow. So…I guess maybe I am a bit of an e-bike evangelist.”

What’s next for Faraday?

“Lots of hard work! Now that we’ve reached our initial Kickstarter goal, we’re reaching for our stretch goal of adding bluetooth to the bike and developing an app – we’re really excited about that. Beyond that, I’m really looking forward to getting down to the business of production and building bikes!”

You can test ride and see the Faraday Porteur in Portland this weekend. Saturday 10-2 at Portland Farmers Market (near the North side of the market) Sunday at Clever Cycles (9th and Hawthorne) from Noon – 5.

That really is a beautiful bike.

That is indeed a sweet looking electric bike Is there a battery or charging cable in that leather pouch?

Perhaps I’m too paranoid of theft, but I see the issue of locking these up outside, unattended, could be a potential turn-off for people adopting electric bikes as errand vehicles, rather than the ubiquitous “urban beater bike”.

I don’t lock up my (relatively) inexpensive $1,200 racing bike because I don’t want to take the risk of it getting stolen. There’s NO way I’d lock up a beautiful ~$3,000 electric bike, so some low-life could jack it.

Get a good U-lock, and use it to attach the frame to a solid object, and you’ll generally be fine in most parts of Portland.

I’m saddened when people talk about developing bike technology to be more inclusive and get more people on bikes but don’t mention affordability. I would love to see a side project to bring this bike to hard working people who rely on bikes to get to work rather than rich people who want a nice smooth ride when they’re trying to get back to the west hills from the pearl. This is from someone else who is passionate about bikes and has volunteered for the BTA and still works in the bike industry. I don’t see myself being able to afford this in the foreseeable future. Sigh.

Manufacturing could be moved to a location with lower labor rates and you could realize some savings there – Mexico, China etc.

Walmart has you covered. This E-bikes sells for $450, the price of a mid-range hybrid at a real bike shop: http://www.walmart.com/ip/Ezip-Trailz-Men-s-Electric-Bike/15773448
I wouldn’t expect it to be light-weight or top quality, but it’s certainly affordable.

The E-Bike shop, a local bike shop, sells this folding bike for under $1200: http://ebikestore.com/ebikes/10-edge-fast-forward-by-ultra-motor.html
That’s not exactly cheap, but it’s less than most road bikes and not much more than other good folding bikes. And it’s certainly more affordable than even a high-mileage used car.

To those bemoaning the price: The price of any limited-edition, carefully crafted, domestically-made bike is going to be high, but those of us who can’t afford them can still celebrate the new ideas that they bring to the marketplace. And we can also celebrate that someone who earned engineering degrees from Stanford and MIT and worked at one of the best design firms in the world… decided to go independent… to make bikes!

would love to see a side project to bring this bike to hard working people who rely on bikes to get to work rather than rich people who want a nice smooth ride when they’re trying to get back to the west hills from the pearl. This is from someone else who is passionate about bikes and has volunteered for the BTA and still works in the bike industry. I don’t see myself being able to afford this in the foreseeable future.