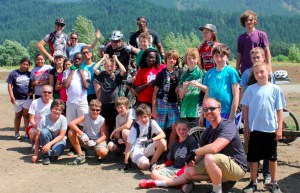 The Northwest Trail Alliance recently wrapped up their first ever kids summer camp last week. The Portland-based non-profit teamed up with lots of local and national partners to put 20 kids on bikes (donated by the Bureau of Transportation) for the three-day camp to learn all the essential skills of off-road riding — including how to take care of trails and riding areas.

The kids ventured from the Ventura Park Pump Track and Powell Butte Nature Park in Portland, to the budding trail system that’s emerged at Sandy Ridge and Cascade Locks (in the Columbia River Gorge). 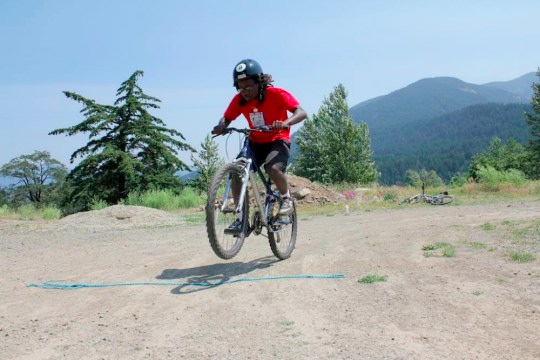 In addition to learning off-road riding basics from Michelle Emmons and Matt McPharlin (who came up from the Dirt Dojo in Oakridge to participate), Hillary and Joshua Hutchens (from The Lumberyard) and Joel Holly (from the BTA), campers also heard from local experts about how to be good environmental stewards. They met a trail builder at Powell Butte, learned about natural species conservation thanks to an Audubon Society volunteer, and they heard from a Bureau of Land Management staffer.

Joshua Hutchens said volunteering at the camp was rewarding on many levels. “We were able to expose kids from very diverse backgrounds to a sport that just isn’t very accessible from this city and the idea that they could ride their bikes in the dirt was pretty foreign to most of them.” While a bit shaky the first day, Joshua and other volunteers all report that the kids made solid progress on their bikes and learned some valuable lessons (like how to yield to horses, and how to build trails that blend with natural features).

But the camp also highlighted a sad fact for young Portlanders: “In reality, the kids don’t have access to the trails without a parent driving them out there, so their new found excitement was kind if bittersweet. It was as if we’d taken them and gotten them hooked on surfing.”

Read more about the camp on the NWTA’s website.

Will there be another this summer?

This is fantastic, and I think it’s really important to introduce the next generation of leaders to both cycling and nature. I hope to be able to help out with this camp at some point in the future.

This is why we need trails. As safe as riding on Portland streets has become, most parents are not going to be sanguine about their children riding for exercise on them. Trails are a great, fun way to safely get the kids into cycling and keep them healthy. Since Ms. Houle has succeeded in getting Commissioner Fish to punt on trails in the most obvious place for them (Forest Park), maybe we should focus on areas like the Gateway Green. It’s also too bad there probably won’t ever be MAX-accessible singletrack in Washington Park for kids whose parents don’t own cars. They could be riding bikes down dirt paths, and instead, their annoying wealthy residents of the streets up there by riding skateboards on the roads.
–
There are other under-utilized parks and green spaces all around town that could easily fit a mile or two of singletrack. The Willamette Bluffs, the grass on either side of the Columbia Slough Trail, and Peninsula Park are all places where wealthy and connected Forest Park neighbors won’t be able to scuttle plans that would benefit youngsters like these kids. Opening more of the trails at Powell Butte would also help (I believe that was the result of the last round of public input).

Commission Fish said last week they need to start cloning pump tracks and other riding opportunities for our youth. OK Nick, where is the plan to get this done while our kids are still kids?

Craig, No we will not have another this summer, but The Lumberyard has a couple camps scheduled. Check their website.

Paul, there are a couple more pumptracks in the works. One is proposed for a project at New Columbia. Should have more info soon. Parks is also master planning for a couple new parks, and pumptracks are options for both. That said, Parks will need a private partner to help build them. Whether NWTA can commit to more of these projects depends on whether we can marshall volunteers. As many people who say they want these facilities, it’s been challenging to get people to actually come out and support. Before we would commit to another, we would need to have the structure in place for construction and long-term maintenance.