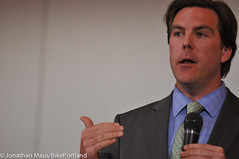 The TucsonVelo.com bike blog is reporting that current Portland Bureau of Transportation Director Tom Miller applied for a job to lead the City of Tucson, Arizona’s transportation department. According to publisher Michael McKisson, Miller beat out all the other candidates and was initially offered the position, but city officials rescinded the offer and have now selected another candidate.

The City of Tucson has instead hired the former head of transportation for El Paso, Texas, Daryl Cole.

McKisson told me via email this morning that, given Miller’s perspective on prioritizing bicycle and transit access over motor vehicle access, “The bike community in Tucson is going to be really disappointed the city didn’t hire him.” He added that, given what he has learned about the hiring process, whatever happened to make the City of Tucson rescind their offer will ultimately, “Really setback Tucson’s goal of becoming a really great place to ride, walk and live.”

“The hope in the bike community will be that Cole will be able to move us forward,” says McKisson, “but it’s clear Miller would have made alternative transportation a priority.”

The Public Information Officer for the City of Tucson, Michael Graham, confirmed for me this morning that Miller was given a contingent offer before they did one last review of all the candidates and changed their mind. “Basically,” said Graham, “We took a second look at the candidate, and Daryl Cole from El Paso was a better fit for the current needs of our transportation department.”

Reached for comment this morning (he’s currently out of town on vacation), Miller said (via text message) that he was simply testing the market. Here’s the full response from Miller:

“It’s good to test the marketplace occasionally and I was flattered by Tucson’s offer. In the end, it was not the right fit. My core interest is developing and maintaining a transportation system that benefits all users in service to a truly sustainable city. Sustainable in every sense of the word. Tucson is beginning to try, but Portland is an international leader. For 40+ years we’ve have the courage to go a different – and better – way.”

It’s not difficult to understand why Miller might have applied for the job. Miller was appointed to the job by Mayor Sam Adams (for whom he worked as Chief of Staff since Adams’ became a City Commissioner in 2004), and some feel he could be vulnerable when a new mayor takes office. Mayoral candidate Charlie Hales has hinted that, if elected, he might make a change at the PBOT Director position.

Some Portland pundits and insiders have questioned the relatively young Miller’s experience in leading an agency with 700 employees and a $275 million annual budget. The fact that the City of Tucson was set to hire Miller, after a national search, could be seen as a validation that he does have the transportation and management chops to do the job. However, the fact that he applied for the job at all raises questions. Would he have left Portland (thus avoiding a potentially ugly transfer of power and questions over his job status) if the Tucson job proved to be “the right fit”? Is he still committed to Portland?

Miller says he’s not going anywhere. “I want to continue building on that bold legacy, here at home in Portland.”

If anything, this is a very important lesson as far as handling a job change.

You need make sure that you get a real offer (written in-hand) before you let your current employer know (or anyone else for that matter know).

This can be an extremely embarrassing situation where you let your current boss know that you got an offer from someone else and then only to find it rescinded.

Please, be *very* careful when it comes to looking for another job while you are currently working.

One ‘they’ (public, your boss, the city, etc) knows that you were looking; it can change the relationship in subtle as well as obvious ways.

Who would want to live in AZ anyway. Gila monsters.

forget about the gila monsters, what I’d be worried about is all the right wing crazies

Some former coworkers who had some severe Seasonal Affective Disorder, those that worship the sun and others that despise rain in all its forms.
Also those who subscribe to the “People’s Republic of Portland” conspiracy.

How is Charlie Hales the leading mayoral candidate? Jefferson Smith was 5 points ahead of him in the most recent poll that was conducted. Hales and Brady both said they would fire him if elected, Jefferson Smith was the only candidate who said you can’t make decisions like that before you take office.

I haven’t seen that poll showing Smith 5 points ahead. I based my “leading” description on fact that Hales won the recent primary election.

Its not the Gila monsters you have to worry about. It’s the state legislator that will get you.

Hey
This is America and we are allowed to belive anything we want and it doesn’t have to have any basis in fact or reality.

Thanks Jesse. I just deleted the word “leading” from the story.

The City Auditor presented at the Small Business Advisory Council this week. In response to a question on what the next administration should be keeping an eye on with regard to fiscal sustainability of the city, PBOT was one of her biggest concerns (as well as the recent decision to add another Urban Renewal Area – the education zone – in the Central City).

Without a doubt, effectively managing the transportation department will be a huge issue for years to come. There will be few easy answers in terms of maintaining our existing infrastructure while aspiring to build a total transportation system. I think any ride down Holman or Going or any of the potholed and crumbling street that has been “remade” as a bike boulevards (or green street or whatever) illustrates the very real challenges we face and that all the easy solutions are over.

So Miller may have been testing the marketplace as he notes or maybe he is/was looking to get out before the real challenges in managing PBOT come down the pike.

The next few years are going to be a bumpy ride. Literally.

Sorry for the tangent, but “…a truly sustainable city… in every sense of the word” got me thinking about a sense of the word not even mentioned, which is that soon there may not even be a Tucson. Not as we know it anyway. The only reason it was at all possible or reasonable for a town to form where Tucson is, was because of the Santa Cruz River, which is now almost totally dry. Granted there’s a diversion canal from the Colorado (hundreds of miles away) that supplies them with some water. The rest, they’ve been pumping from the ground for years, and now the groundwater’s depleted. Plus those pumps use energy. They also truck in food and supplies using energy, condition the air using energy, and try to keep Mexican drug cartels out using energy (DEA helicopters etc). Cheap energy is the only thing keeping the place going at this point. Once that goes, you’re back to the intrinsic characteristics of the place and its ability to support life. How many humans can it support?

Portland at least has a couple big rivers. Though things still could get wacky as the climate changes.